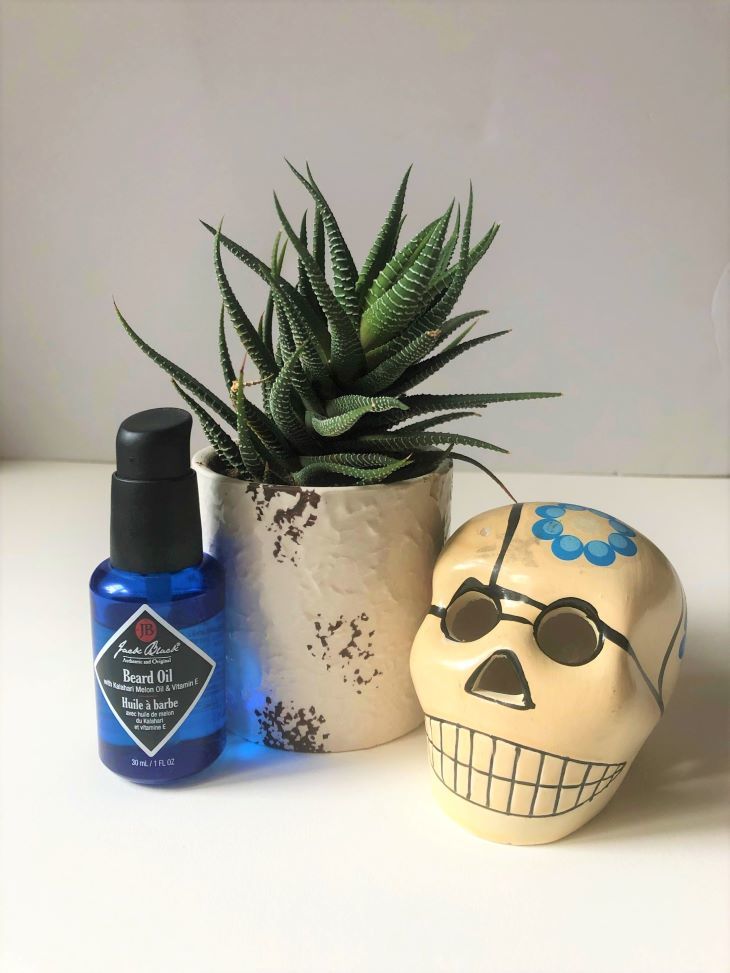 So, before we jump into our Jack Black Beard Oil review, we should with the burning question in everyone’s mind:

When we discuss Jack Black, we're not discussing singer/songwriter/actor Jack Black. That Jack Black has nothing to do with the beard oil—the Jack Black of Nacho Libre fame busted onto the scene around 2000, with his breakthrough performance in the film, High Fidelity—which is absolutely worth a watch, by the way.

The Jack Black we're talking about is the beard company, which has been around since the year 2000, and makes beard products, shaving gear, and body works.

Jack Black the singer/songwriter/actor may have more name notoriety, but Jack Black the Beard Company is actually really something special, and their Jack Black Beard Oil may actually be one of—in our humble opinion—the best oils you can get for your beard.

So here we'll go over everything we like, and we'll also discuss one or two things you may want to keep in mind, because even though we think this is a fantastic beard oil, there may be a few reasons it's not for you.

This is one of our favorite beard balms, simply because it works really well: it's easy to work into a beard, and it's easy to get it onto the skin beneath the beard (and that's something a lot of beard oils fail at). It's got some really fantastic ingredients, including a few (such as kalahari melon oil and marula oil, brown algae, carrot extract, plum oil) that we haven't seen in other formulations. It doesn't have a strong smell—so if you're one of those guys who really likes scents, you may want to check out another brand, like Grave Before Shave or Mountaineer—but the smell it has is pleasant (sweet but not too sweet, and both delicate and masculine, somehow). Overall, a really strong option, and one of our absolutely favorite beard oils.

So, here's what we liked:

Perhaps More Than Any Other Oil We've Used, It REALLY Hydrates

Moreso than most other beard oils we've tried, Jack Black really imbues moisture into beard and onto skin. It was easy to get out of the bottle, easy to warm in the palms of our hands, and easy to work into the beard and skin. With a lot of "lesser" oils, you feel like you're fighting with it, in a way—you have to really try hard to get the oil into your beard. Not the case here—it was really easy to get it onto beard hairs. We used a comb afterwards, but we probably didn't need to—this is one of those use-it-and-go formulations.

We should also note that it was easy to get the oil onto skin. With thinner beard oils—and we would classify this a thicker, denser beard oil—you're never really able to get it onto your skin, and... that's important! The oil is supposed to hydrate your hair, but it's also supposed make contact with your skin and provide skin care benefits—namely, it's supposed to moisturize, relieve some itchiness, and alleviate some skin flaking/beardruff. We found that it was really easy—with only three little pumps of the stuff—to work onto skin.

And, the look was nice too! 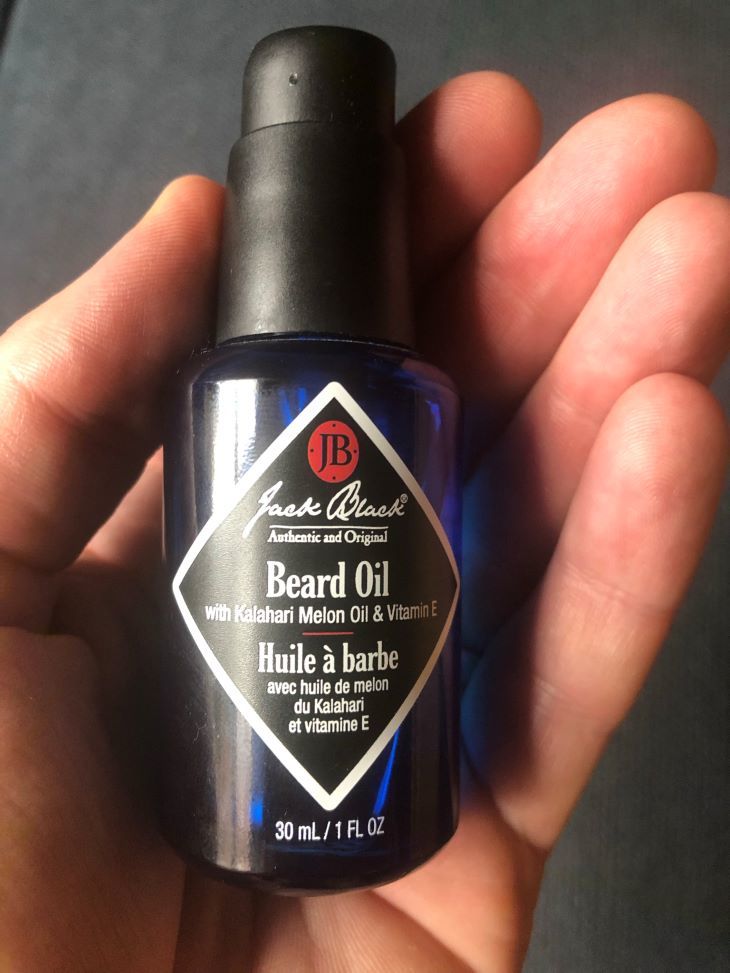 The reason it does what it's supposed to do is because it's chock full of surprisingly good stuff. If you look for ingredients, there are plenty of unique inclusions we don't see in a lot of other beard oils. Here's the whole list, and we'll pinpoint what's unique about it afterwards:

There are some ingredients in there that aren't so incredible—most beard oils feature grapeseed oil, argan oil, and/or sunflower oil, and Jack Black's got all that here. It's all good, and those ingredients definitely have benefits, but they're present in a lot of beard oils. Vitamin E is another one—this isn't really that noteworthy; most beard oils have Vitamin E (it's often listed as "tocopherol").

There are a lot of ingredients that Jack Black uses are pretty uncommon, though, and the big ones are:

Kalahari Melon Oil and Marula Oil. These two oils have a high fatty-acid content, and they're unique because they absorb quickly—meaning Jack Black Beard Oil can integrate into skin and hair quickly, instead of simply sitting in your beard and looking greasy, which happens a lot with lesser beard oils;

Brown Algae and Carrot Extract. These ingredients contain strong antioxidants that provide a lot protection for your skin and hair. If you've ever heard of "free radicals" and the damage they do to skin and hair, that's what antioxidants protect against, and brown algae and carrot extra have oodles of antioxidants;

Plum Oil. This is a neat inclusion, and it a cosmetic one: plum oil softens hair that's brittle and crunchy, and gives it a little shine so that it can appear more healthy and full. This is a rare ingredient at present, but we may see more of it in years to come.

This is not to say that the ingredient list is without flaw—not everybody loves Cyclopentasiloxane, for example; it's a silicone, and a lot of people try to avoid those—but there's a lot to like here.

It's hard to say what it smells like—it's a little sweet, maybe, but not quite floral; clean, but not at all soapy; delicate and not pushy, but somehow still manly or masculine. Scents are always tough to describe, but we like this one a great deal.

The most important thing to note is that it's a very gentle scent. It doesn’t smell strongly, and that's another way in which it's different from other beard oils—many beard oils are highly scented, and while that be a lot of fun, it's not for everyone. Grave Before Shave and Mountaineer have a wide range of scents, but you don't always want that—especially if you're going to wear a scented deodorant or a cologne.

It's Got a Great Bottle Design

This doesn't sound all that important, but it's actually a significant strength.

There are a few things that separate "regular, very good" beard oils from "high-end, excellent" beard oils, and one of those is the bottle design (the other is the ingredient list, as we just detailed). The bottle is a stout, sturdy container made of glass (and not some chintzy plastic thing), and it's got the emblematic blue-and-black design that all Jack Black products feature. It's handsome, in other words, and we like that sort of thing.

But it's also well-designed. Many of the "regular, very good" beard oils have a dropper as their means of expressing the fluid, and they're... meh. They're funny and quirky at first, and then they're just kind of a pain. They leak, they're hard to travel with, and you can never get an exact amount of beard oil with them.

Jack Black Beard Oil, however, has a pump-action head—so you can pump out exactly as much or as little as you need—AND a locking mechanism that disenables you from pushing the pump down by accident.

That doesn't sound like such a big deal, but it's actually really helpful. If you're the kind of guy who throws beard oils etc. in the back pouch of a backpack or the pocket of your coat or something, there's always a chance it could leak and get over everything. With this pump, you twist it a certain way, and you can't depress it to get any more out: 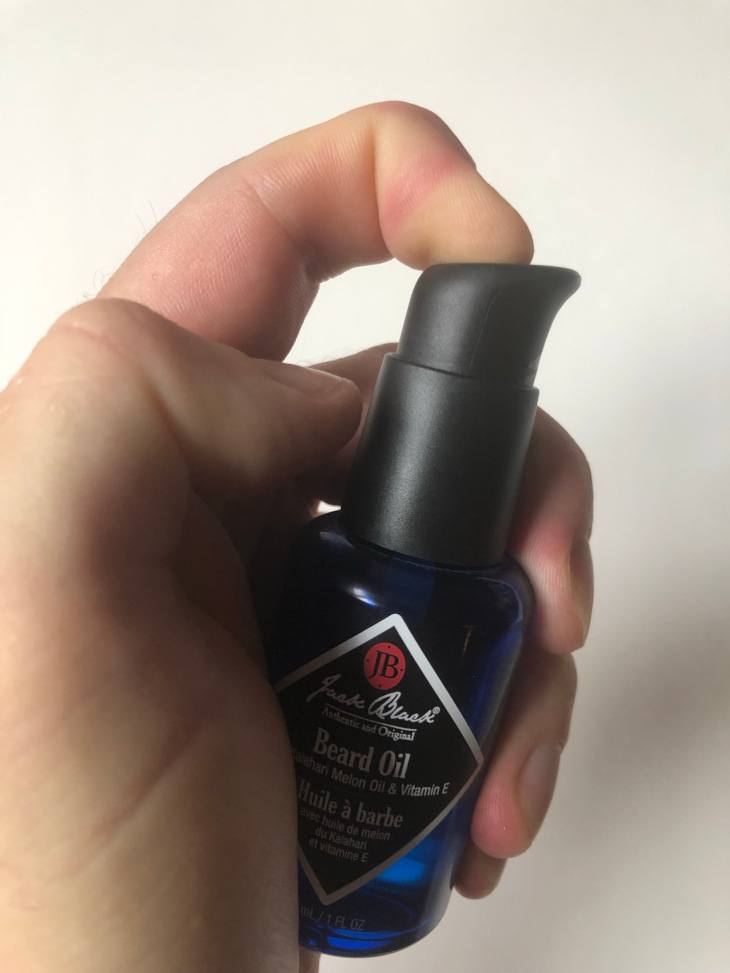 If you look at my fingers, they're white/red—I'm really trying to push this down, but it's stuck in place. That's great.

The only gripe we have about the bottle is that it's a single ounce—it would be nice if it were larger.

You WILL Need to Wash Your Hands After Using It

So this next criticism is a little perplexing: Jack Black Beard Oil is very oily.

That sounds a little silly, because… well, it’s a beard oil! It should be oily. If it’s not, there’s something wrong!

But the fact is, there are a LOT of oils in this formulation—most beard oils have one or two carrier oils and one or two essential oil and a fragrance, and that's that. So there is a lot of oil in... this oil. Now you know.

I think what our friend was getting at is that the formulation is very sticky, and he's absolutely right. There are a lot of beard oils that have a water-y consistency, and that's not a bad thing, per se—but "water-y" consistency is not how we'd describe Jack Black.

After you use it, your hands will be slippery and slick like a seal's flipper, and then they'll be sticky.

So, you will most definitely need to wash your hands after using it. That's part of why it works—it really connects and coats to your beard hair and the skin under your beard—but it also connects to the skin on your hands. A soap that cuts oil/grease (like a dishwashing liquid or a liquid hand soap) usually gets it off pretty effectively.

That can actually be a pain, if you like to re-up during the day and put a little more oil in your beard when you're out and about, so it's something to keep in mind. You could sprinkle a few drops onto a beard comb and reapply, but that, too, seems like a hassle.

So, not the biggest deal in the world, but something to keep in mind.

We like the company, too—they have a blog that they actually update. It seems like most companies that make beard products have a blog with one or two posts and that's it—they clearly forgot about it and moved on to others things.

There you have it! Jack Black Beard Oil is a high-end version, and it meets all the requirements we have for a beard oil: it hydrates REALLY well, smells pleasant, and has a lot of great ingredients in it. The bottle is compact and lockable, and that's great. It's a "stickier" formulation, so you'll definitely need to wash it off your hands after using it, and it has silicones, which some "ingredients-conscious" folks don't like. All in all, though, one of our absolutely favorite options, and two big old thumbs up.