Grave Before Shave—or GBS, if you're into brevity—is one of the better-known manufacturers of beard products, and it’s easy to see why: their product design is gorgeous, and they offer everything from butters to balms to waxes. But do they deserve their notoriety?

In our opinion: mostly yes! And a little no. In the post below, we'll detail aspects of GBS beard oil we really like, along with some critiques interspersed.

And if you're really into brevity, here's a summary before we dive into the details: 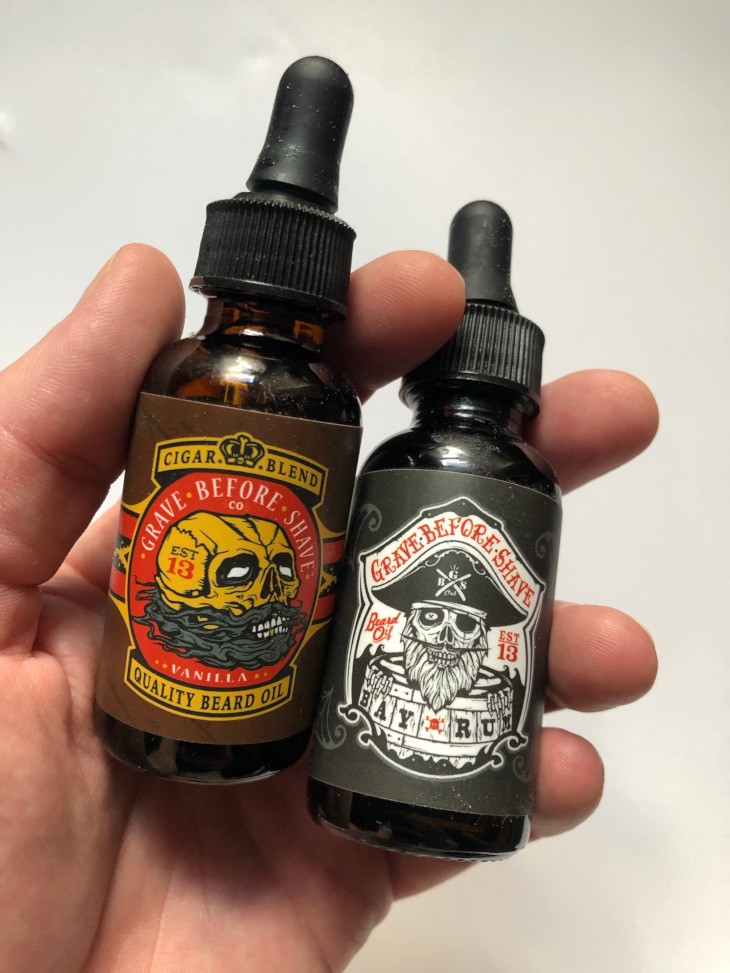 Recommended pick. There are dozens (if not hundreds) of beard oils on the market, and some get the basics right—the do a good job with single-note scents—but very few really branch out and create unique signature scents. Grave Before Shave really embraced the "signature scent" game, and they've created aromas you won't find elsewhere (and you can see our list below). That's fantastic if you're looking for something that stands out, and doesn't smell like so many other beard oils out there right now. Aside from scent, and perhaps more importantly, the oils are designed to deliver: they're formulated with some fantastic ingredients to condition beard hair and moisturize the skin beneath it, and many formulations in the line are concocted to fight beard dandruff (which is something a lot of guys deal with). The scents themselves are always intuitive—and that's a common problem with signature scents—and bottles can leak, which makes them imperfect for travelling. A few complaints, but mostly thumbs up.

Alright, let's get to the nitty-gritty. We'll start with the feature that stands out most:

GBS Makes Their Beard Oil in a *Lot* of Scents

Grave Before Shave makes their beard oil in a wide—and unique—range of scents, including:

> Viking Blend (unscented—more on this below)

That's a really long list of scents. Most other beard oil brands—and there are a lot of them—stick to four or five aromas, and that's that. GBS has really gone the length here and made a wiiiide scent list, and that's fantastic. If you like the consistency of the oil—and from our experience, it seems like the consistency is pretty consistent (ha) in each of the oils—you can make your way through all of them and find a couple favorites. If you really enjoy all the scents involved in wearing a beard, that can be very enjoyable.

The other thing that's great about that extended scent range is that they've created a lot of original scents. That's a huge plus—if you like wearing unique aromas (that is, scents that many other people aren't wearing), there's a lot to experiment with here. They've also covered the basics with a few single-note scents like pine and teakwood, but most of their offerings are distinctive.

Of course, the problem is that all those unique scents is that they're very difficult to describe. It's difficult to intuit what a "Gentleman's Blend" is going to smell like. Pine, OK—you have a good idea of what that smells like, and you have a good idea of what Caramel Mocha Coffee Blend smells like, but... "Head Hunter's Blend"? What is that, exactly? Do head hunters smell good? The scent itself, from our own personal experience, smells good, but—it's difficult for a person curious about the scent to figure out what it smells like.

That's a minor critique, and it's true of any signature scent—we've yet to figure out how to transmit scents via the internet—but it's worth mentioning.

It's Also Made in an "Unscented Scent"

Not all beard oil lines come with a "no-scent" option, but they should! Sometimes you don't want to overdo it on the scent—you've got other scent signatures you're wearing (like a strong deodorant)—and a scent in your beard is too much. Or, like a lot of guys, you may *like* the smell of various beard oils, but you don't want it under your nose literally all day long. That's actually true for a lot of guys—experiencing a single smell all day long can be a little much.

The "unscented" option is the Grave Before Shave Viking Blend (affiliate link). And—we should mention, while we're very pleased they make an unscented option, the name "Viking" is a little confusing. Did Vikings smell good? We're not historians, but we're willing to be the answer to that was probably a big old "no." Vikings probably had a lot of scents, and those scents were probably terrible. Vikings spent more of their time fishing and pillaging and standing in front of campfires, and that all adds up to some FUNK.

So the name "Viking" is a little confusing when it comes to a product that is supposed to be scentless, and it doesn't really help that GBS doesn't really make it clear on the bottle that "Viking" is the unscented option. But—well, I guess that's what we're here for! Now you know.

IT'S MADE IN A 4-OUNCE BOTTLE!

The “regular” bottle is a one-ouncer, but here's the Grave Before Shave Beard Oil in Bay Rum (affiliate link) and it's a four-ounce bottle. That's delightful.

One of our gripes against beard oils—and by that, we mean literally most of the beard oils on the market—is that they're sold in one-ounce bottles. That's it—just a single ounce. If you have a big bushy beard, or if you like to reapply beard oil a few times a day, that means that the contents of the bottle can go VERY quickly. It seems like you get a bottle, use it all up within a few weeks, and then need another.

So we love, love, love the option to get a 4-ounce bottle, and WHY. DON'T. MORE. BEARD OIL COMPANIES. DO THIS?

Our guess is because beard oil companies would rather you buy their three-packs, rather than a single large bottle, because those three-packs might net them more money? We can't really say—we're not economists, or business owners, or even really that good at math, so their reasons delude us—BUT, we can say with 100% certainty, that we are very, very pleased that Grave Before Shave offers the 4-ounce bottle. That's fantastic, and much appreciated.

If you've read any of our other reviews, you've probably noticed: we love how beard products look. We love the logos, the design, the bottles, the whole thing. Part of the fun of having a beard is getting all these bottles and tins with gorgeous designs on them and building up a chest of products.

And we think the GBS artwork is fantastic. It's gorgeous! It's gritty, and dark, and severe, and the themes—pirates, Vikings, skulls, ghosts that look like emaciated English gentlemen—are dark in a fun and playful way. Here’s a picture of their Caramel Mocha Coffee Blend: 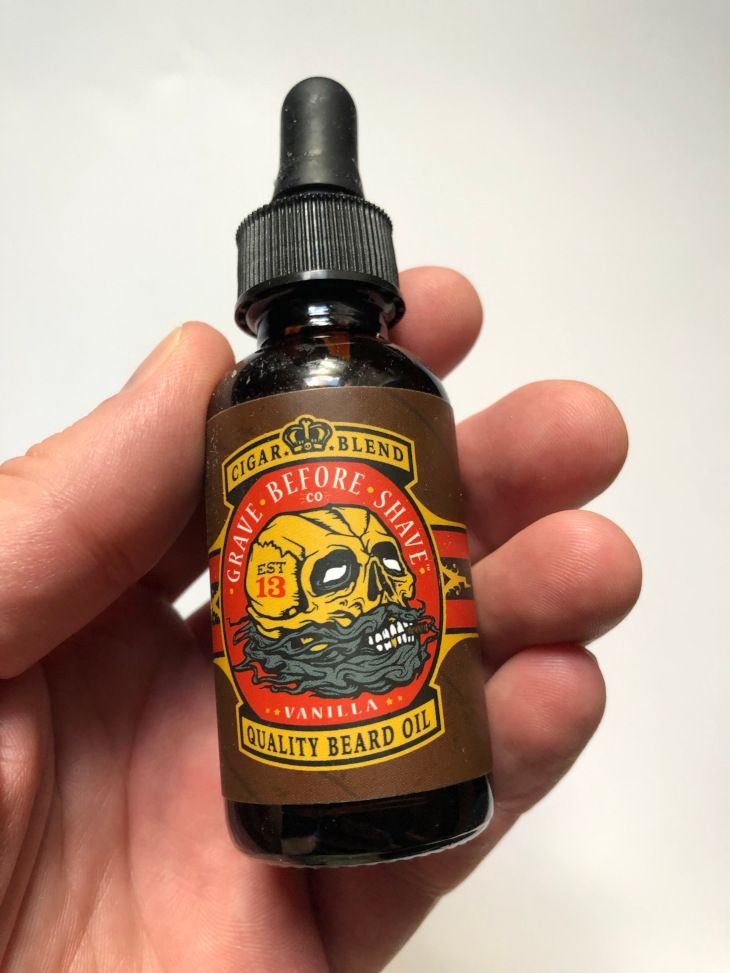 And here's a picture of their Bay Rum scent: 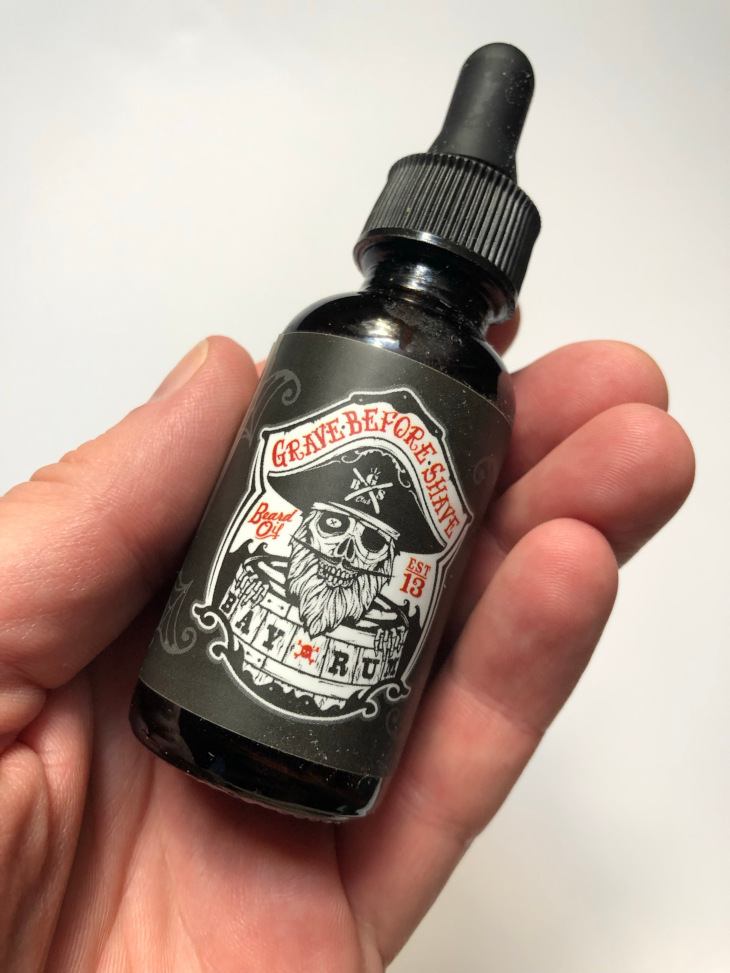 We're absolute suckers for that sort of thing (and we imagine many people are).

Plus, the name—"GRAVE BEFORE SHAVE"—that's clever. Beards were faddy for a while, but a lot—like, a lot a lot—of the guys who grew beards during that fad are keeping them for life, so "Grave Before Shave" (meaning, in other words, I'll expire before I get rid of my beard) resonates with a lot of users. It's very clever, and we appreciate that sort of thing.

OK, back to the product itself. Beard oils really only have a few ingredients—it's usually a mixture of essential oils, carrier oils, and some scents—but it can be really hard to find a "balance." GBS seems to have done that—in our most humble experience, it seems thick enough to provide body to your whiskers, but so that that it's difficult to work into your beard.

There are some beard oils there—Jack Black Beard Oil comes to mind—that are super viscous. That’s not a bad thing, per se, but it can be a hassle sometimes.

OK, now for the “critiques” section of our Grave Before Shave beard oil review:

Criticism: The Print on the Bottle is SUPER Small

This isn't the biggest problem in the world, but it is something we found a liiiiittle bit irritating: the print is SUPER small. If you need glasses, make sure have you them near if you want to read the ingredient list (and if you're a fella with skin sensitivities, obviously that ingredient list is going to be very important to you).

This complaint is, of course, true for most beard oils/beard balms/beard waxes, just because the containers are so small, and it's not a huge criticism, just something to keep in mind if you plan on using it and need to read the ingredient list.

That's actually a good segue into the next section, which is...

If you want to use GBS beard oil, here are a few pointers we learned the hard way:

Use It Before You Put Your Shirt On. The dropper on the GBS beard oil is good, but it's not great. None of them are, and no matter the amount you suck up into the dropper, some of it is going to fall out. So be sure to apply the oil right out of the shower, or during any period before you put on your clothes. Beard oil comes out of beards pretty easily, but once it stains a shirt, it can be really difficult to get out.

You May Need to Reapply. Beard oils rarely last all day long, and if you want to enjoy the scent for more than a couple hours, you may need to reapply. That's true for a lot of beard oils, we've found—it's a rare beard oil that can last all day long.

It's NOT a Growth Agent. We've gotten a lot of questions about this, so we've taken it upon ourselves to squash this rumor—beard oil does NOT help you grow facial hair. It can create a scenario on your skin that's conducive to beard growth—it can keep your skin and your pores moisturized—but it won't enable you to grow whiskers that your body wouldn't otherwise produce.

Be Careful If You're Going to Travel with It. We learned this one the hard way: the best place to store a beard oil bottle like this one is in the bathroom cupboard, standing right-side up. Every time we've put it in a travel bag, or thrown it in a backpack, it's spilled a little bit—and as we just mentioned, if it leaks on clothing, you're going to have a VERY hard time getting it out of that clothing. The reason for that is the dropper-top—the cap of the bottle houses the rubber dropper, and that rubber dropper is not air-tight, so if the bottle leans over at all, chances are pretty strong it'll seep out. Something to keep in mind if you're planning an adventure and want to bring your beard oil along.

Sorry we went a little bit long on this post! We get to ramblin' sometimes, and for that we apologize. That said, we had a lot to say. This gets a thumbs up from us. And, if we’re being honest, most of the products we review get a thumbs up from us, because we don’t review the ones we don’t like, as we don’t have it in ourselves to trash someone’s work. Anyway.

That about wraps it up from us. Hopefully there's something here that helps you—good luck, have fun, and happy beard!