Before we jump into our Caveman Beard Oil review, we want to make a quick observation: 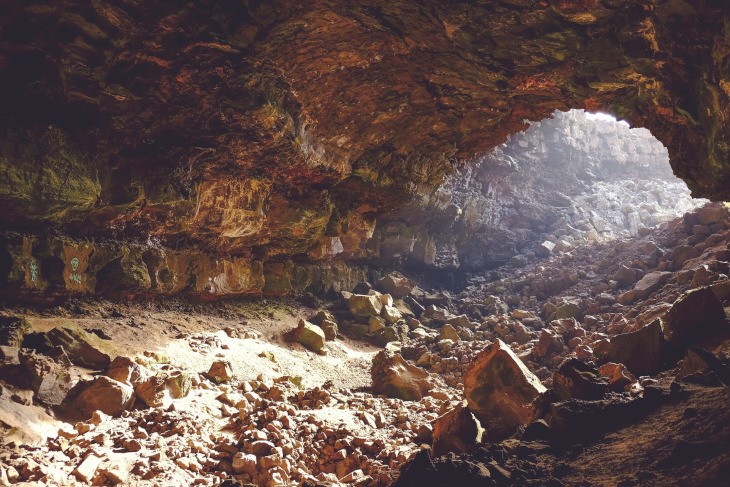 It's an odd gamble, naming a beard oil "Caveman." Cave men, after all, weren't known for their grooming. In fact, they we known as terrible groomers, who probably smelled pretty badly, like campfires and raw meat and flaked dirt, so it's a bit of a risk to name a grooming company after them.

Most beard oil companies—and most male grooming companies in general—tend to go in the opposite direction, and name their company after something refined. They tend to use the world "Gentleman," or "Dapper," or "Cultured," or something like that. And that makes sense—most guys who go to the bother of using a beard oil want to look their best, and a refined gentleman is probably going to look better than a caveman.

From a different angle, though, it makes sense: beards are a symbol of unbridled masculinity, and with that comes a degree of wildness—a lack of refinement, in other words. Some guys like that angle—they like the roughness, and coarseness, or having a beard, and they don't want to hear too much about the "refined" angle.

And with that in mind, we have Caveman Beard Oil. We think they're a fantastic alternative to some of the "fancier" beard oils out there, and we think they've tapped into an interesting opportunity with some of their scented oils.

Here we'll take a quick look, and share what we like, what we find lacking, and our overall thoughts.

Pro: The Cavemen Line is Expansive and Absolutely Original

We're actually going to give Cavemen some really high praise, right off the bat: their scent-selection is second-to-none. Of all the beard oils we've looked at, Cavemen has the widest and most creative scent line, with each of the "scent groups" represented (and we've split them up, according to our standards, below). The only other beard oil maker that comes close to Caveman in terms of scents would be Grave Before Shave. GBS probably has better names—and it most definitely has better artwork on the bottles, which is something we most definitely look at—but in terms of broad selection, Caveman is the brand to beat, in our humble opinion.

So here they are, along with their ingredient list. You've got...

These are in-line with the "Caveman" ethos, and most beard oil companies have a few "forest" scents. They tend to use pine or forests fir or eucalyptus, so the Maple Bacon scent is unique—the only other brand that we know of that has a maple is Zeus their Zeus Spiced Maple Beard Oil (affiliate link), so that's great. Our favorite, though, is the "Hunter Black Coffee." What a great take! If you've ever been hunting, or hiking in the high country, and had a hot cup of black coffee in the morning... that's such an evocative, pleasant image/feeling. Such a great name!

So those are the "outdoors-y" scents. Next up you have the "bright" scents:

Orange + bourbon is a nice decision, as is peppermint—they paired the peppermint with pine, which makes for a nice, bright smell. Most beard oil companies try to tamp down that peppermint smell, but they ramped it up, which is awesome.

The next two are "classics" that you usually find in most lines:

Cedarwood is a tough smell to get right, and honestly, it's not our favorite. The sandalwood is, though, and that's maybe the "real" classic beard oil scent—it's reminiscent of barbershops and has a nice "clean" smell.

The next to we'd categorize in the "night out" bracket:

Tobacco is actually a pretty popular scent—even some high-end oils like Tom Ford use it—but don't misconstrue it: it's more "tobacco leaf" than "lit cigarette." It's got an earthy, kind of nutty, flavor. The Drunken Cavemen is their take on the classic "Bay Rum" scent. Our only gripe about these names is that they're offering some really classic, old-school scents, but that doesn't always come across in the names. We had some idea that "Drunken Caveman" was probably their bay rum scent, but that's only because we literally run a website about beards, and we think about this sort of thing a lot. There are probably plenty of guys out there who are going to miss something like that, and they might not realize that “Drunken Caveman” is a bay rum scent. Anyway.

OK, in addition to all the scents we just mentioned, they make two more scents, and they're proof again that Caveman has really put its neck out when it comes to variety. They are:

We're actually going to describe these, because not everybody knows what nag champa is, and "Wildwood" actually hides what "Wildwood" is.

Nag Champa is a scent of Indian origin, and it's usually a mixture of sandalwood and either champak or frangipani. We always equate it with yoga studios or meditation centers. It's not a common scent, and it's DEFINITELY not a common scent when it comes to beard oils. So, kudos to Caveman, again, for including a scent that nobody else does—very forward-thinking for a caveman!

The last one is Wildwood, and that's actually their patchouli scent. This, too, is a scent we don't see in a lot of beard oils (and it's actually one of their problematic scents, so we'll save that for our "Cons" section.

Last, but not least: no scent!

> Sensitive Beard Oil: Grapeseed Oil, Castor Oil, Apricot Oil. Designed to be hypo-allergenic and fragrance-free. Not everybody wants a scent, and if that's your gig, this one may be a good choice for you.

So there’s a lot to like there, and the cavemen at Caveman have really covered their bases.

Next up in our Caveman Beard Oil review is a mix of the good and the bad:

A Pro and a Con: The Ingredient List is Very Simple

We listed this as a con, but it's both a pro and a con (depending). You may have noticed above, that most, if not all, of the formulations has three ingredients in common: Grapeseed Oil, Castor Oil, and Apricot Oil. Those are actually REALLY common ingredients, and you'll find one or more of them in most concoctions, regardless of the brand. Those three ingredients can moisturize skin, can give hair some shine, and can help with flaking, which is an issue for a lot of guys. Those are the "big three" tasks you want a beard oil to do, so that's great.

So they keep things simple, and the nice thing about a simple formulation is that all of their beard oils are the same—except for the scent ingredient. If you find that you like what the oil does to your beard—that it moisturizes it and conditions it to your liking—you can feel free to go from scent to scent as you please.

But.... here's the truth of it: the ingredient list *could* be better. We'd love to see some jojoba oil for skin care, or maybe some vitamins, like A or C or E (Vitamin E is an easy addition to a beard oil, and a looooooooot of formulations add it). The three main ingredients they've included are good, but there's definitely room for improvement. If you're looking for a beard oil with more focus on skin and hair care, we'd recommend Viking Revolution and their Viking Revolution Beard Oil (affiliate link)—it has a number of those ingredients we just mentioned. 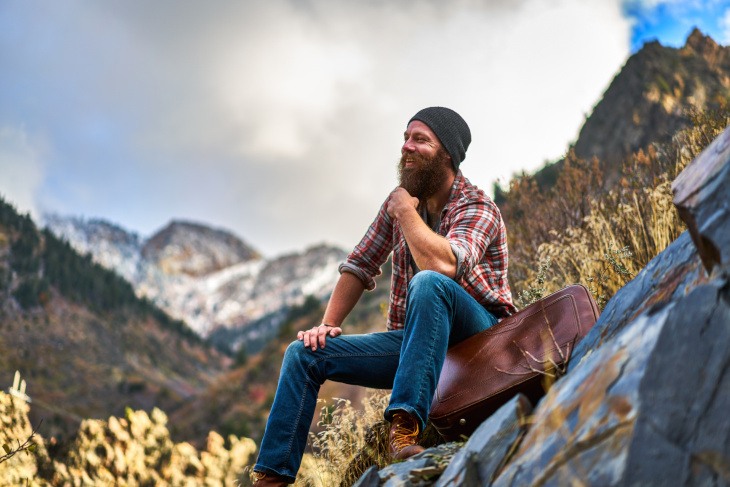 A Pro and a Con: It Can Be A Little Strong

This is another one we'll list as both a plus and a minus: the scent can sometimes be strong, and that differentiates it from a lot of oils, many of which are more subtle.

It's our *guess* that manufacturers of beard oils tamp down the scent a little bit, because you're placing the scent right under your mouth and nose, and a scent that's too powerful would be a turn-off. That can be a tough balance to strike, and it seems to us like most beard oil companies are operating under the "a little goes a long way" rule.

In our experience, though, Caveman has been—well, more Caveman-like! The scent is a little more aggressive. That's our experience, anyway—your experience may be different, and it's interesting to note that that seems to happen with beard oils: people can use the same beard oil and have a very different experience with it.

So, that's up to you—if you like a stronger scent, there you go! If you don't, well, maybe you want to use a little bit less of it.

The irony is that there is *one* scent that's actually weaker than normal, which leads us to our last con:

The Patchouli Scent is a Little Weak

We had actually heard that of all the scents, the patchouli concoction was a little less-than-stellar, and that was our experience, also. Patchouli is a bright, beautiful scent, and usually it's pretty assertive—you've never not sure whether someone is wearing it or not. Usually you know. Here, though, it seems to be tamped down. Most of the guys we know who wear patchouli really want to put it out there, so keep that in mind if that's what you're aiming for.

But... well, there seems to be an opportunity here, as well!

If you like patchouli scent, but you find that most patchouli products are too strong, this may be a good option. The Caveman Patchouli Beard Oil may be lighter than you expect, and that can be a nice option for those of us who want a "small hint" of patchouli instead of a healthy dose of it.

Remember How We Started This Review?

We were talking about how Cavemen is an interesting name for a beard oil. The Caveman logo, though, addresses that in a clever way: "BE PRIMAL. STAY POLISHED." That's a nice touch—it seems to encapsulate both the "primal" and "posh" aspect of having a beard.

Thank you for reading, and all the best to you! Have fun, be good, and happy beard!