Every Man Jack is one of those brands that sounds niche or boutique, but in fact it’s pretty big, and growing quickly. They've got dozens of products for men, including everything from body wash to beard shampoo to styling gels (and a whole lot more). Here, we'll take a look at their beard oil and talk in-depth about what we like and what we don't.

But, hey—we know you're busy. We go into great detail below, but if you want to hit the road, Jack (sorry) here you go:

This is an above-average oil in the world of beard oils. The ingredient list is long and jam-packed with different oils that benefit hair and skin. The scent line could be a little more broad—there are (at current) only four scents, and we discuss each below—but they've got a hemp scent, which nobody else seems to make, and that’s fantastic. It's a thoroughly modern product make-up—the formulation is cruelty-free, vegan, polyethylene-free, oxybenzone free, and with a lot of other nice touches—and it comes in a pump-action nozzle (as opposed to a dropper), which we appreciate. Overall a great choice, if you're happy with the scent you choose.

Pro: It Has a Wide Range of All-Natural Ingredients

When it comes to beard oils, a lot of us get hung up on scent—it's one of the most noteworthy characteristics of a beard oil (and because that's the case, it's how we tell them apart).

But that's not really what beard oils are about—their primary function is to soften and condition beard hair and promote skin health. To do that, you need a solid ingredient list, and that's the first "pro" in our Every Man Jack Beard Oil review: the ingredient list.

Most beard oils only feature a few ingredients—one or two essential oils, coupled with one or two carrier oils, plus a scent or two—but Every Man Jack has thrown in a loooot of fantastic ingredients. Check it out—here's what's in their Cedarwood formulation:

That's kind of impressive—when you include that many ingredients, it's difficult to balance them all, and that's why a lot of beard oils include only a few. That is, by our count, 18 ingredients—and when you consider that most of them are included not for scent, but for skin and hair care, that's fantastic (in our humble opinion, of course).

Pro: They've Got Four Scents in the Line: Not Too Much, Not Too Little

OK, remember when we said the primary purpose of beard oils is hair and skin care, but we all get obsessed with scents? Well, here we'll discuss scents.

Every Man has got four scent varieties, and they are:

Sandalwood: This is a "classic" beard oil scent, and it's one of those scents that people think they don't know but often recognize it at first whiff. It smells kind of like barbershops—warm, clean, and comfortable;

Shea Butter: This is an interesting choice on Every Man's part, and you don't see too many beard oils with a shea butter scent—it's not a go-to scent—and in fact, the main scent here is actually light coconut;

Natural Hemp: This another interesting inclusion, because as far as we know, there aren't any other beard oils (at present) that feature it. Hemp is always tricky, and the smell isn't always what you imagine—and in this formulation, hemp is actually a minor scent (safflower and coconut actually come before it in the ingredient list)—but still, very good; and finally

Cedarwood: Every Man's "woods-y" entry. We like it, not everybody does (and we discuss that further below).

So... four is gooooood, but... well, we'd like to see more! We make a similar complaint in all our beard oil reviews, because we're greedy. We really like what Grave Before Shave does—they've got a really really creative line of scents, and to a lesser extent, Mountaineer. Four is good, though, especially when you consider that there are plenty of beard oils that only feature a single scent. 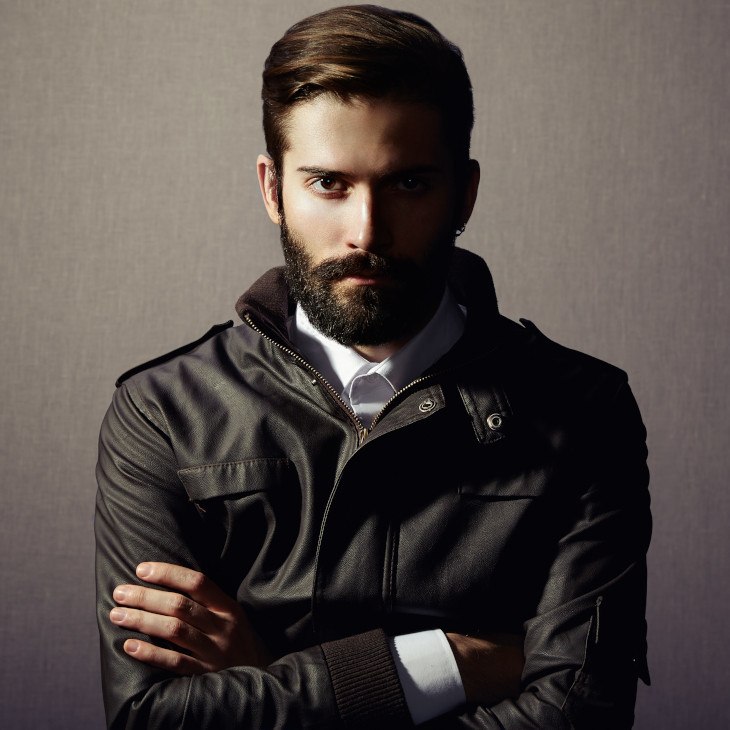 Pro: It's Cruelty-Free and Vegan and a Whole Bunch of Other Feel-Good Things

(One note: the discussion below applies to Cedarwood, Sandalwood, and Shea Butter Beard Oils—we're not sure if the above is true for Natural Hemp Beard Oils. We couldn't find that info in the marketing materials).

OK, you ready? There's a lot here. "Health-related stuff" can be a slog to read, but it is important, and we've tried to make this interesting:

> Naturally Derived: As they've mentioned on their website, the company makes every effort to use naturally-derived ingredients, and they actually do a great job explaining the purpose and benefits of all the ingredients they use as per their website's "Ingredients" page;

> 50% PCR Bottles: We had to look this one up, because we weren't sure what it meant, but "PCR" stands for "Post-Consumer Recycled"—it means that the Every Man Jack bottles are made from recycled material;

> Cruelty Free: No animals were harmed during the making or testing (and both are important) of the product;

> Gluten Free: The product contains no bread or baked goods. We actually had to look this one up too: many people are gluten-sensitive in terms of diet, and gluten-sensitive people have concerns that topical application of gluten can also be harmful. According to the National Celiac Association, a group that represents and serves individuals with gluten sensitivities, there is "currently no scientific evidence that gluten used in cosmetics that are not ingested is harmful to individuals with celiac disease, including those with dermatitis herpetiformis (the skin form of celiac disease)." They go on to say that "If you have celiac disease, then the application of gluten-containing products to the skin should not be a problem, unless you have skin lesions that allow gluten to be absorbed systemically in great quantities."

Nonetheless, we know plenty of people who want to play it as safe as possible, because gluten allergies are—to put it lightly—no fun, and can create serious health concerns over time, so if you're looking for a gluten-free option… here it is! That’s great, because most beard oils aren't gluten-free.

> Polyethylene-Free: We also didn't know what this meant! We're learning a lot writing this review. Polyethylene is a plastic used in cosmetics and grooming products as an adhesive or bulking agent. Most folks don't want to slather micro-beads of plastic on their faces, so this is also a good thing to omit.

> Oxybenzone-Free: Used in a lot of grooming products to protect the products from UV light, and apparently it's toxic, so again, a good thing to exclude.

> Aluminum-Free: Aluminums are mostly used in deodorants and antiperspirants because they keep sweat ducts from releasing sweat onto the surface of the skin, so while it's goooood that Every Man doesn't include it, we don't see why they would include it in the first place, so... no points awarded for this exclusion! Still a good thing, though.

> Vegan: No meat products in the product—this usually goes hand-in-hand with "Cruelty-Free," so it's nice to see; and finally...

> Made in the USA: USA! USA! USA! Extra double bonus points for making products in the USA, because goodness knows fewer and fewer are. Good on ya, Jack!

Pro: It's Got a Pump-Action Nozzle!

No stoppers or droppers here! This is another complaint we have for a number of other beard oils that are otherwise fantastic but feature droppers, which are messy and sticky and hard to use (we're looking at you, Zeus Beard Oil, and you, Honest Amish Beard Oil, and you, Viking Revolution Beard Oil).

This might be a new trend in beard oils—it seems like more manufacturers are moving away from droppers—and we're thrilled about that. Droppers are quaint and they have that sort of old-school feel that's part of beard culture, but they're a pain to use (and we say even as we like them! They’re just a pain). They can be a drag, so pump-action release is a great feature here.

Pro: They Offer the Whole Kit and Kaboodle

We recommend these sorts of packages whenever we can, because we've found them very helpful: The Every Man Jack Beard Kit (Shea Butter). That pack features a beard and face wash, beard oil, beard balm, and a two-sided beard comb.

That's pretty much everything you need for beard maintenance—beard and face wash for skin and hair, a beard oil for out-and-about-wear, and a two-sided comb from grooming: it's got broad teeth on one side to get rougher knots out of your beard, and narrower teeth on the other for detail work after you're in better shape. The beard balm is kind of extra—we don't really consider it an "essential"—it's more of a styling item—but it's nice to have.

Every Man Jack seems to have branched out into a very wide range of products including, but not limited to... body wash, body bars, cologne, razors, creams and gels, post-shave oils and creams, skin washes and scrubs, moisturizers, masks, lip balms, suntan lotion, shampoos, conditioners, styling products, etc. Even hand sanitizer, which, as we sit here in a (hopefully) post-Covid world, seems like a great touch.

Anyway, if you're a guy who likes to keep things simple and use one single product line for all your needs, this is a company that can do that for you. That's nice, because a lot of beard companies are more "boutique" shops—they only offer a few things.

OK! There you go—those are the "pros." There's a lot to like with Every Man, and we think those are the bigger advantages. No product is perfect, though, and our Every Man Jack Beard Oil review would be incomplete without some cons. So here you go:

We mentioned earlier when we were talking about the hemp scent: the primary ingredient for scent in that concoction seems to be safflower, and then "Fragrance (Parfum)" (which is kind of a general name that colognes and beard oils use for a general fragrance), and then after that, hemp. It smells good, but... lean into that hemp, fellas! Be bold!

That's a minor gripe, because as we mentioned, it still smells nice, and it does smell hemp-y. We'd just like it to smell a little more like hemp.

Of the Jack's four scents, the Cedarwood seems to be the one that people disagree on most. Some like it, some love it, and some seem to hate it.

So, props to Every Man Jack for trying it. We obviously can't say whether people will like it or not, but we do know that people seem to generally be on board with the rest of the scents but have issues with cedarwood.

For example, the ingredient we mentioned above, Hexyl Cinnamaldehyde, is actually known to cause allergic reactions, even though it is an all-natural ingredient. The instance rate is very low—at 0.1%, that's a tenth of a percent—but if you're among that tenth of one percent, you're probably wishing you had tried something else.

Again, not a HUGE "con," but something to be aware of.

Alright, that's it from us. We hope our review helps you in some way. There's a lot of great aspects to their beard oil, mostly in the ingredient list, but a few things you may want to keep in mind. Have fun, be good, and happy beard!