In our never-ending quest to review every single beard product we come across, here we'll discuss Beard Guyz Beard Oil. One of our pet peeves is misspelled products, but one of favorite things is well-made beard products, so we'll see how things play out. We'll start with a quick summary, and then dive into the details:

Beard Guyz' main offering is their Beard Guyz Beard Oil—which we think does a very good job moisturizing beard hair and skin, and smells pleasant—but they also offer Guys Beard Guyz Micro-Mist Beard Oil, which has a slightly different ingredient list (also very good), but it features a spray bottle, which allows you to apply the oil to your beard without using your hands, and we love that (and we should note—spritzing beard oil into your beard will probably require the help of a beard comb). The "Grotein" term can be a little misleading—it can help you grow a beard if you're already capable of growing one, but it cannot *make* your body grow a beard if already can't—but other than that, we give a thumbs up to both beard oils.

Alright! Let's dive into the specifics:

Before We Begin, a Word About Grotein...

We should probably start here, because it seems like most Beard Guyz beard products included the word "Grotein" somewhere on the label. We looked all around, and it's not always clear what "Grotein" is. We found some language on the bottle and we also found the following the Beard Guyz FAQ page: Grotein is...

"a special blend of ingredients found throughout the Beard Guyz line. It is specifically designed to help your beard look thicker and fuller"

and on the bottle, it says that...

So let's unpack those statements.

Grotein—presumably from the words "grow" and "protein"—sounds like an ingredient that will make your beard grow. We want to be clear here: it's not an ingredient that will make your beard grow, and if you re-read the statement from Beard Guyz above, they seem to be very careful to avoid stating that it makes your beard grow. In the first statement, they say it makes a beard look thicker and fuller. In the second statement, they say that it helps geed growing follicles, that it moisturizes skin, and that it enhances shine, and...

That's it. They don't say anything about growing a beard, in either statement, so the name "Grotein" can be a little misleading.

What a beard oil like Beard Guyz—and every other beard oil that contains naturals—can do is create an environment on your skin where whiskers grow naturally. In other words, if your body can naturally grow out whiskers, a beard oil can provide vitamins and nutrients to your skin and hair that can nourish them and help them grow.

OK. We wanted to get that out of the way. We're not saying Beard Guyz is a bad beard oil—in fact, just the opposite; it's got a lot of great ingredients, and we like it a lot—we're just saying that it's not capable of growing you a beard if you're not already capable of growing one. 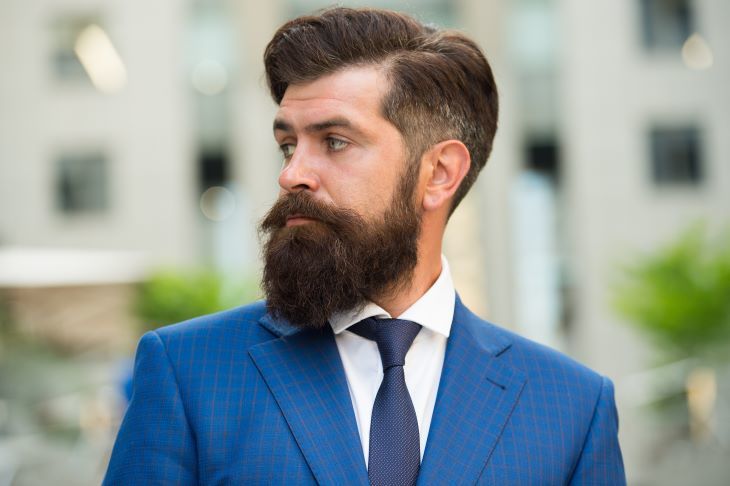 The first one we like, the second one love. Here's how it shakes out:

Beard Guyz Beard Oil (affiliate link) is the main beard oil—the original one. According to the Beard Guyz product page, it's got some great ingredients, including:

> Argan oil, which is a great moisturizer, and can hydrate both beard whiskers and the skin beneath those whiskers, and it can soften a beard and make it look shiny;

> Sunflower oil, which is also a great moisturizer, and can eliminate some frizz and tamp down some fly-aways; and finally

> Sweet almond oil, which is a very common ingredient in beard oils, and can provide some resilience for the shafts of beard hair.

We couldn't find the full ingredient list, but those are fantastic inclusions, and they add up to a very well-made formulation. If would be nice of the Guyz made the oil in more than one scent—it's only available in their signature scent, and we'll talk more about this below—but overall, we think this is a well-made beard oil.

Beard Guyz Micro-Mist Beard Oil (affiliate link) is the Beard Guyz' next-level offering, and we're BIG fans. It's got a slightly different ingredient list (and more on that in a second), but the big game changer here is the SPRAY BOTTLE. It's fantastic! Why all beard oils don't come in a spray bottle, we don't know, but we think it's FANTASTIC that this one does. Here's why:

Beard oils, by their nature, are sticky. They're oily. They adhere quickly and fully to whatever they're put on. For the vast majority of beard oils out there, they either come in 1) a bottle with a dropper, and that's true for probably 95+% of the beard oils out there, or 2) a small squeeze bottle. Either way, you have to put the oil on your hands to apply it, and no matter which variety of oil you're using, your hands will get oily, because... beard oils and made out of oils. They're oily. It's hard to avoid.

But with a spray bottle, you can spritz the oil directly into your beard, and then distribute it evenly and thoroughly throughout your beard and mustache using a wooden beard comb. No fuss, no muss! Brilliant! Again, why all beard oils don't come in a spray bottle, is beyond us (and yes, for you purists out there, we know—putting the oil in your hands warms it up. We're still thrilled at the spray bottle).

So that's the biggest and best feature about the Beard Guyz Micro-Mist Beard Oil. The other feature we like is the ingredient list. It's got a slightly different lineup, and includes:

> Argan oil, just like in the original—a great moisturizer, and capable of eliminating some frizzies;

> Soybean oil, which can add softness and shine for a beard.

Altogether, a nice line-up of well-known, often-used ingredients, and one capable of providing beard hair and skin with hydration and moisturization.

There seems to be a lot of confusion on two of Beard Guyz' products, which are similar in appearance and feel: Beard Guyz Beard Oil and Beard Guyz Serum. Here's what we found out on Beard Guyz' website:

"Of the two, Beard Oil is what you would use throughout the day to keep facial hair soft and your skin moisturized. We recommend that Beard Serum only be applied twice a day. It contains a concentrated dose of Grotein, which helps already present facial hair appear thicker and fuller.

So, again—it's not a formulation that's designed to help you grow a beard—it's a formulation that's designed to make the beard you have look thicker and fuller. It's also got a very different ingredient list, so the two products are not synonymous—from their description, it sounds like the beard oil is for beard softness and skin moisturization, and the serum is to make your beard appear thicker. Now you know!

Some Critiques for the Guyz

That said, there's something wrong with everything, and our reviews would be incomplete and disingenuous if we didn't include a few "cons" for a few of the "pros" in our Beard Guyz Beard Oil review.

We don't really have much to complain about here, but we will say:

It would be great if the oil was made in a wider range of scents. Most oils are made in a few different fragrances, and some beard oils—like Grave Before Shave—are made in a looooooooot of different scents. The scent that Beard Guyz has included is pleasant and in no way overbearing, but it would be nice if they offered a few more scents. Even if it were something simple—like a lime, or a sandalwood, or any of the commonly-included scents—that would be great.

The scent doesn't last too long. This is more a feature than a bug, because most beard oils lose their scents within a few hours, but Beard Guyz Beard Oil isn't a standout in that way—it seems to diminish after a bit. Again, that's not a huge complaint, because most beard oils are like that—we're just saying that in our experience, this isn't one of the oils that has a lot of lasting power.

One of the Guyz