In the past ten/fifteen years, there's been an explosion of beard and mustache products, and Honest Amish was one of the first companies on the scene. They actually started selling their products offline at farmers' markets and festivals before moving their gig online, and they absolutely took off when beards became really popular.

Fast forward to today, and they're one of the better-known companies that make beard and mustache goods. Their best-known offering is probably their beard balm, but we think their beard oil is under-appreciated, so in the post below, we’ll take a closer look at it, and ask the really pressing questions: What does it smell like? And are the owners actually Amish? And if so, are they honest, or is that just a lie? As always, we'll leave no stone unturned.

Honest Amish is unique in the beard-care world because they focus most of their products on their own proprietary scent. Other companies make a wide range of scents, like citrus scents, rum/liquor scents, and woodsy scents, but Amish has created something totally unique and enticing. It's a little hard to describe—it’s a sweet-but-not-overwhelming mix of almond, maybe a little clove bud, and some reallllly light lavender—and we find it very pleasant, and very unique. You may like and you may not, but you won't find another scent similar to it.

The application is easy, the ingredients are organic and good for your skin, and it lasts a decent amount of time. It may require some reapplication throughout the day, but that's a feature of most beard oils, so we can't fault them for that. Definitely worth a look, and in our humblest of opinions, we think this is a great addition to any beard oil collection.

Alright, so there's the overview. Now let's dive into details. We'll start with one of the most important aspects of the beard oil:

The scent of Honest Amish is... well, absolutely indescribable. Not to say it's amazing or not amazing (and for what it's worth, we find it very pleasant), it just simply smells very unique. There's not really anything else like it out there.

That's a unique accomplishment, because if you'll notice, most beard oil have a very specific scent: bay rum, vanilla, cedar, etc. Those are very specific scents, and you know exactly what it is when you get a whiff of it. Honest Amish Beard Oil is almost like a cologne in that way—it's unique, and that's part of its appeal.

So what does it smell like? Again, it's totally unique, and it's difficult to describe smells, and it helps to take a look at the ingredient list (which we list below), but it's a very gentle combination of sweet almonds, some kind of mild liquor, and honey, maybe? There’s no honey in the formula, but it smells a little honey-like.

It's a sweet—but not simple—smell, and most importantly, it's not overpowering. Even the best scent in the world is going to irritate you if it's too aggressive, and that's one area where the balm really stands out: it's not too much. In fact, it's just about right, in our most humble of opinions: enough to come back to and appreciate when you want to, but not so strong that it's going to take your attention off whatever you're doing. It can be difficult to strike that balance (and that's especially true for strong scents). 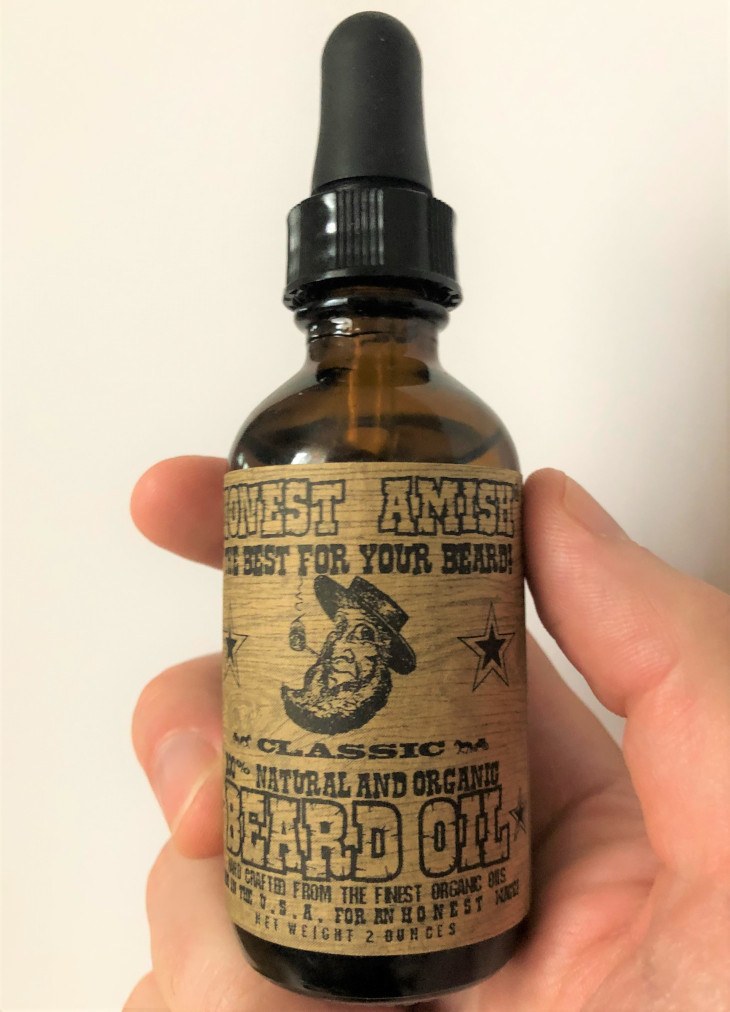 It's Very Easy to Use

We're going to break down "Usage" into two parts:

Application. Some beard oils—even some of the higher-end ones—can get a little gloppy upon application, but that's the case here (at least, not in our experience). It has a light, slick feeling—a little oily, because, well, that's what it is—but not as oily or sticky as an olive oil, for example. It seems to evaporate off your hands a little, which is nice—you can work it into your beard, and then you can rub into your hands go about your business. That's a very nice feature if you want to reapply it to your beard during the day—you don't need a sink to wash your hands after using it. Again, that's a really nice feature, because not all beard oils (and certainly not all waxes) are like that.

Moisture/Shine. This is, perhaps, the *most* important aspect of a beard oil: what it does for your whiskers. Honest Amish is designed to bring a fair bit of moisture to your beard, enabling you to untangle it and comb it out. It doesn't give it any real hold—that's what wax is for—but it can give it some body and some softness and just a liiiiiiittle bit of shine. Those three things—body, softness, and shine—is really all we can ask for in an oil. A+.

It's Got Some Fantastic Ingredients

For the longest time, men's grooming products didn't really contain any ingredients that were actually good for you. Products for women have Vitamin E, moisturizers, etc.—but men’s products had nothin.’

Not only that—it seems like a lot of men's grooming products were actually BAD for you! Shaving creams that dried out your cheeks, deodorants that burned your armpits, etc. It's kind of wild to think about, honestly—and what's weirder is that because there were no "good-for-men" products out there, we used all that stuff and didn't really think twice about it.

> Avocado Oil: can help moisturize whiskers and increase collagen metabolism in the skin

> Sweet Almond Oil: has fatty acids that are good for the skin; also used for scent

> Kukui Nut Oil: can reduce inflammation on the skin

There are some other ingredients—cedarwood oil, star anise oil, clove bud oil, and lavender oil among them—and (we're guessing) those are included in smaller amounts as scent agents. The main "movers and shakers" present in the formula seem to be pumpkin / avocado / almond / apricot kernel / kukui nut / argan / and jojoba oil.

So those ingredients can do some very nice things for your whiskers and skin, but they also make it so that...

The Oil Lasts a While

So, the longevity of the beard oil is above average. It lasts for a while, and while you may need to re-apply here and there, it lasts longer than some of the "lesser" beard oils we've tried.

The best thing about the longevity of Honest Amish Beard Balm, however, is that...

It's Not Impossible to Get Out of Your Beard

We can't overstate this: it's easy to put in, but it's also easy to put out. That's a huuuuuge deal, because there are plenty of beard oils out there are tar-like: you can work it into your beard, but you can’t work it out. That’s awful.

Amish doesn’t have that problem, thankfully—it’s light and easy to remove, which is true plus.

It's Comes in a Two-Ounce Bottle and That's GREAT

This sounds like a small deal, but if you actually like using this product—or if you've got a really big, voluminous beard—you can go through it pretty quickly. Most beard oils come in single-ounce bottles, and that's... OK... but it can be disappointing. They're smaller, so they're easier to store in a bathroom cabinet, but the problem is that you can go through them pretty quickly. And that's especially true if you've got a very big beard or you like to reapply a bunch of times during the day.

So that two-ounce bottle is very nice. It's still small enough for a backpack or a satchel or even a jacket pocket, but it'll last longer than many beard oils out there.

The Dropper is Fantastic, Too

This also sounds like a secondary concern, but it's actually a really great selling point for the oil: the dropper than comes with the bottle actually works. It capably vacuums up the oil and suspends it for a second or two before releasing it. It's not 100%—a drop or two may fall out—but it's better than most.

If you end up getting a dropper that's not great, it's not the end of the world—the dropper should be able to vacuum the oil effectively, and then you can put the top of the dropper in the air until you're ready to use it, and then you can turn it downward and let gravity do its thing—but it's nice knowing that these things are well-designed. Some "lesser" oils have garbage droppers, and that's a huge pain—you ended up dripping the stuff all over the sink / your clothes, and that's very irritating.

So... there you have it! We're big fans, and this Honest Amish Beard Oil review was pretty easy to write. The product smells good (and is very unique), it's easy to use, and it has some really great skincare ingredients.

As we mentioned above, the scent is pretty unique. There aren't really any other pumpkin / almond / apricot kernel / jojoba mixes out there, and it may not be for everybody. If you'd like something like the Honest Amish—that is, sweet, but not overwhelming—here are the ones we'd recommend:

If You're Looking for a Vanilla Scent...

We usually suggest the Beard Reverence Vanilla Beard Oil. It has the sweetness of the Honest Amish, but without the almond-y / unknown scents. Plus, it comes in a two-ounce bottle, so you can use it a little longer.

If You're Looking for Something Sweet but with a Little More Oomph...

One of the criticisms we sometimes hear about the Honest Amish is that it's a little too faint. If that's the case, you may want to try to the Grave Before Shave Bourbon/Sandal Wood Scented Beard Oil. Sandalwood is one of those classic, "clean" scents, and the bourbon gives it a little kick. It's a nice combo, that can come across with a little more strength.

If You're Looking for a More "Classic" Scent...

We'd steer you to check out the Viking Revolution Sandalwood Beard Oil. It's got a lot of the same moisturizing and skin-revitalizing properties, and that's because it shares two main ingredients with Honest Amish—and those would be the argan oil and the jojoba oils—but the sandalwood it's got a more old-school, classic scent. It, too, is subtle and not overpowerful, but less sweet. It's one of those "masculine-but-not-overpowering" scents that a lot of guys like. Finally...

If You're Looking for Something Sweet but Lively...

You may want to consider the Initiative Citrus Bergamot and Lavender Aroma Beard Oil. The bergamot and lavender are sweet and calming, but the citrus give it a little bit of pep. This one comes in a one-ounce bottle—booooo!—but otherwise we think it's a great pick.

And there you go! Some alternatives to Honest Amish. And, look—if you're into beard products, Honest Amish is pretty well-known, and you'll probably see their products all over their place. We really do think they're work a go. But if you want something else, those are the products we'd suggest.

Do Amish People Actually Use This Product?

Is it Amish-approved? Honestly, we can't say. No Amish were consulting in the writing of Honest Amish Beard Oil review. We used it, however, and we think it's great.

So—there you have it! Any questions, make your way over to our Contact page and give us a holler. In the meantime, look good, smell good, feel good!