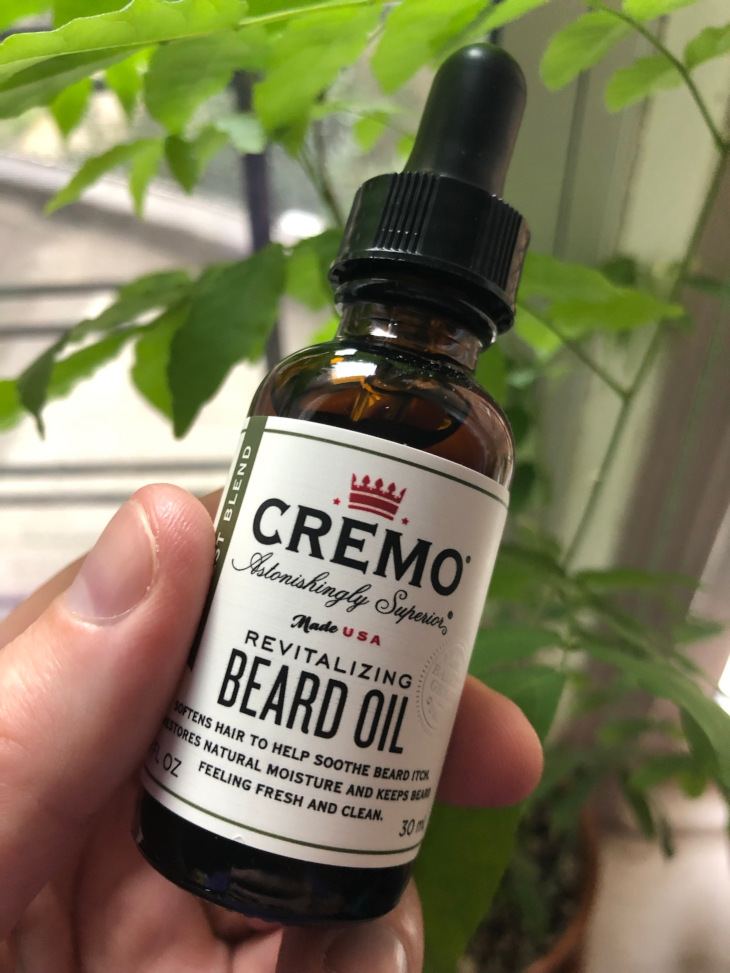 Before we jump into our Cremo Beard Oil review, we should start with an observation.

We're big fans of company slogans—you know, the little tagline that comes after a company name. Some are iconic (like Nike's "Just Do It"), some make big promises (like Red Bull's "Red Bull Gives You Wings"), and some are downright boastful (like BMW's "The Ultimate Driving Machine").

Cremo has a great company slogan, and it most definitely falls into the "downright boastful" category. It is: "Astonishingly Superior."

Wow! Talk about a flex. Not only "superior," but astonishingly superior. So superior you won't believe it. Talk about a big promise! That's a Whopper (ha).

So, let's talk brass tacks. Cremo Beard Oil—does it live up to Cremo's hype? Is it any good? Should you look elsewhere?

Below, we'll share what we like, what we think is so-so or lacking, and some random thoughts about whether "Cremo" sounds Italian or not.

It's Got a Top-Shelf Ingredients

If you've read any of our other beard oil reviews, you'll find that we're fairly obsessed with scent. We can't stop talking about it. The truth is, though, that scent is a secondary trait when it comes to beard oils, and their main purpose is to fortify your beard hair, fortify your skin, and relieve skin itch. They're designed to give you beard hair body and provide it with protection, and to hydrate your skin and keep it from flaking.

The way they do that is through their ingredients, and Cremo is top-notch when it comes to ingredients. Each formulation is different, but here are the ingredients from three of our favorite Cremo Beard Oils, from their website:

(NOTE: We didn't include the unscented variety; we talk about that below).

There's a lot there, but the three ingredients you see in all three are sunflower oil, avocado oil, jojoba oil, and Vitamin E. Here's what they do:

Sunflower Oil: Provides haircare benefits for both hair and skin, as it is both high in linoleic acid (for skin) and oleic acids (to help moisturize skin);

Avocado Oil: Also a great "one-two" punch for skin and hair, due to its lethicin content, which coats and strengthens hair and captures moisture in the skin;

Vitamin E: A natural antioxidant, Vitamin E is used in grooming products far and wide, going back more than 50 years; and

Jojoba Oil: This is the real superstar, and we pretty much divide all beard oils into formulations that include jojoba oil, and those that don't. Jojoba oil is very similar to the oil that is found naturally in your skin, making it a fantastic moisturizer. It's the real mover and shaker of Cremo Beard Oils, and it's one of the ingredients we hope to see in a beard oil.

Pro: This Gets Out Vote as "Best Bang for Your Buck Beard Oil"

Because the formulation includes those ingredients—and because it includes jojoba in particular—we crown Cremo as the "best bang for your buck" beard oil. The other beard oils that contain jojoba oil are mostly high-end formulations, like Tom Ford Beard Oil, and, to a lesser extent, Zeus Beard Oil. It's rare to find a beard oil in this range that includes jojoba oil, and that's probably our #1 favorite thing about Cremo Beard Oil.

Really—that's fantastic. If you use a lot of beard oil, and you see it disappear quickly, it can be tough to keep getting those high-end options. A mid-range option like Cremo, that has such a great ingredient list—that's a great "pro."

When you think of all the grooming products you use on your way out the door—a soap in the shower, a shaving cream to get the whiskers below your neckline, a beard oil, a deodorant, etc.—it makes sense (ha). All those aromas can overwhelm/contradict each other.

So it can be nice to pick a brand and go with it. If that's your gig, Cremo's got soaps/body bars, beard/shaving products, face treatments, and colognes. The cologne is the real catch, because it's actually a scent, and if you're striving for "scent solidarity," if you will, you can pair it with one of the beard oils.

So, we think it's a great thing that Cremo has a whole range of products. And, sadly, it leads us to the first "Con" in our Cremo Beard Oil review....

Con: Cremo Makes Their Beard Oil in Only A Few Scents!

This is a big disappointment, and kind of a surprise, to be honest. Cremo offers (at current) four beard oil scents: Forest Blend, Mint Blend, Distiller's Blend (their bourbon scent), and unscented (which, yes, we will count as a scent).

This is not a complain about those scents. Those are among the essentials that most beard oils makers include, and they represent a nice mix of earthy/woodsy (Forest Blend), perky/bright (mint), and comforting/enticing (bourbon). It's that we'd like to see more scents.

Cremo has a long product line—everything from beard oils to beard washes to body washes to face masks—and we were hoping that they'd go deeper with the scent line. Beard oil is mostly about hair care, but scents are what you actually remember, and what you get excited about in front of the bathroom mirror.

By the way, "Cremo" sounds like an old Italian company—something like Proraso—but it's actually two dudes named Kyle and Mike. That's not a knock—Cremo is a tremendous company with a lot of great products and it's actually really hard to make a popular, accessible beard oil that has so many great ingredients—but we assumed with a name like "Cremo" the company would be founded in, like, Naples in 1904, by two dudes name Vincenzo La Guardia and Giuseppe d' Romano or something. So we were surprised to find Kyle and Mike running the show.

Anyway. If you're looking for a big wide line of creative scents to jump into, there are two beard oil companies we'd suggest: Grave Before Shave and Caveman. Grave Before Shave has all the classics but with funky formulations and creative names—everything from Bay Rum (rum + mild coconut), to Caramel Mocha Coffee Blend (coffee-ish), to The Original "OG" Blend (citrus + rosemary + lemon)—and their ingredient list is pretty good. Caveman goes for a more "rugged" approach, and they offer a wide list of scents with an "outdoors-y" theme—everything from Deep Forest (fir needle + eucalyptus), to Hunter Black Coffee (cedarwood + coffee oil), to Orange Bourbon (liquor + citrus). Both of those lines have a lot to choose from.

Again, this isn't a knock on the scents that Cremo does offer—we like them a lot. We just wish they offered more.

One Quick Note About the Ingredient List and the Unscented Version...

This isn't a pro or a con, and this is true of every beard oil—and literally every beard product or grooming product you'll ever use: be sure to check the ingredient list if you've got sensitive skin, allergies, or any skin issues. Cremo is one of the more popular beard oils out there, and it seems like a loooooot of guy use it without any issues, but that doesn't mean it's perfect for everyone. People have reactions to ingredients all the time, so you want to be sure.

Also, it's worth nothing, that we took a closer look at the "Unscented" version (on the Cremo website, here and the "Unscented" formulation actually has a pretty long ingredient list, including:

If you're looking for an unscented version with very few ingredients, we suggest Ranger Grooming Company Beard Oil (affiliate link). It contains only two ingredients—Golden Jojoba Oil and Moroccan Argan Oil, both organic—and all you need to know is whether you're OK with those two ingredients, rather than the entire list of ingredients in Cremo Unscented Beard Oil.

Please understand—we're not saying that Ranger Beard Oil (or any other beard oil) won't give you a reaction—we're saying it's made with fewer ingredients. It's up to you to know yourself and to check whether the ingredients in a concoction will cause you to have a reaction.

Alright, with that out of the way...

Cremo: Is It Astonishingly Superior?

It's very, very good, and as we mentioned earlier—if we were to award a "Best Bang for Your Buck" category, Cremo Beard Oil would be the clear winner. It's got a LOT of fantastic ingredients that other beard oils in this range simply don't offer, and jojoba oil is chief among them. So for what it is, it's very good, and we give it two thumbs up. "Astonishingly Superior" might be a stretch—and if anything, we'd say that Cremo Beard Balm (not their oil—their balm) is closer to astonishingly superior—but their beard oil is definitely a very solid option, and the best of the "mid-range," "for-everyday-use" beard oils. Recommended.

OK! There you have it. That's it from us. Thanks for reading, and we wish you all the best—be good, have fun, and happy beard!