Beard Oil Before and After Pics on Two Beards

If you're new to wearing a beard—or you've simply got an inquiring mind and like to know things—you may be wondering: what does beard oil do to a beard?

Well, friend, your wait is over, and here it is: our beard oil before and after pics.

Below, we'll use one of our premiere beard models to show whether or not beard oil can change the look and shape of your beard. We'll show two different beard types: a well-trimmed beard, and a super-wiry, this-way-and-that messy beard.

Will the results be dramatic? Will they be underwhelming? The suspense is unbearable, so let's dive in.

One other spoiler alert:

We're not going to talk about how to apply beard oil in this post—if you'd like to learn about that, you can visit our "How to Use Beard Oil" post, where we cover just about everything you’d ever want to know.)

We're going to show you a beard that needs a lot of love, in order to display what a beard oil can—and can't—do. 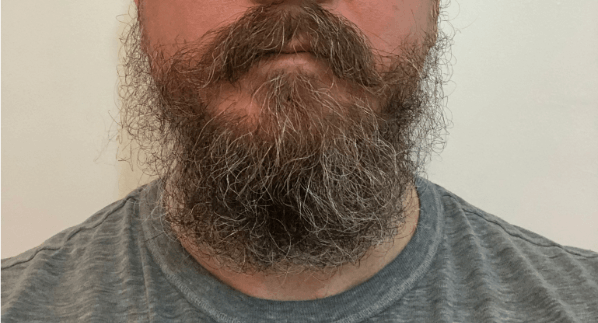 No offense to this guy, but this beard is a mess. Man! Look at it. Let's take this thing apart piece by piece.

Actually... first, let's point out some positives. We don't want to hurt this guy's feelings:

It's Got Some Girth. While there are definitely some wiry bits shooting outward below the ears, there's some nice volume underneath the chin. That's good—you can work with that.

There's a Nice Mustache in There Somewhere. The facial hair above the upper lip is nice and thick, and while it desperately needs some trimming and shaping, there's the potential for nice handlebar mustache or a 1970s-style cop 'stache.

So those are the good things. Now let's be a little more critical:

It's Really Wiry. There are wispy bits shooting off in all directions, and that’s never a good look;

The Soul Patch is Sloppy. The whiskers right below the lower lip are fanning out instead of pointing straight down. This isn't the biggest deal, and you can work with it, but it’s poor form; and lastly

It Needs Shaping. More than anything else, this bad boy needs some grooming. There's a really nice beard here, underneath all that insanity.

Have you ever heard that saying, "There are no unattractive women, only lazy ones"? Well, we'll provide an alternative version of that idea, and say that there are no ugly beards, only lazy beards. Or lazy guys who don't take care of their beards.

That's not a perfect translation of that quote, but you get the picture. The beard above isn't a bad beard, really—it just needs a little attention and shaping.

Alright, now let's take a look at this same beard after we put some beard oil in it. We're going to use Viking Revolution Beard Oil (affiliate link), which looks like this... 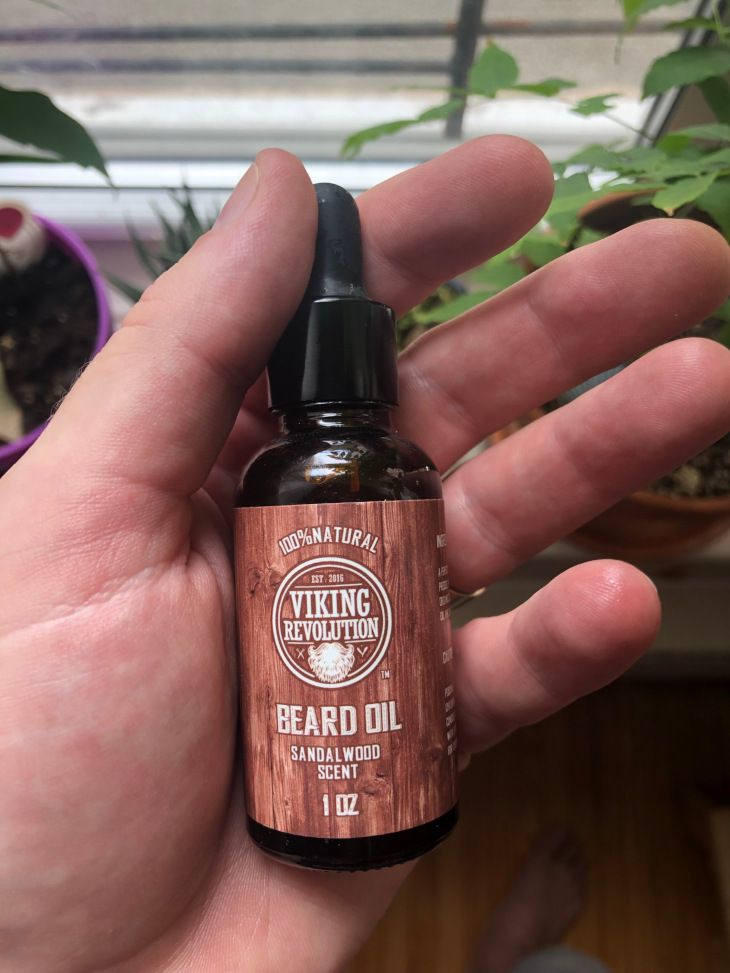 ...and is one of our go-to beard oils. It's easy to use, smells great, and isn't too slick.

Here's the beard after using it: 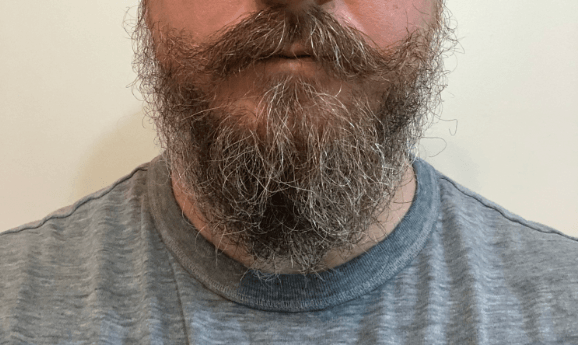 Alright! While this beard still needs a trim and some shaping—it's still a little rough around the edges, literally—there are definitely a few aspects that have improved. If you take a close look, you'll see that...

It Has a Better Overall Shape. Again, what this beard really needs is a clipper and a scissor—but the beard oil really did pull it together a bit. Instead of pointing outward, as it does in the first picture, it's generally pointing downward, in a nice triangle shape. There are still a few wisps spouting outward, but there are fewer of them, and they're less distracting;

The Mustache Looks Healthier. There's still a little bit of "lip overhang," if you will, but it looks a little more organized, and has taken on a nice "handlebar mustache" shape. It's a little classic, masculine mustache that Bill the Butcher might have sported; and lastly

The Soul Patch Is... Well, not that much better, actually. We would have hoped to see the soul patch gathered tightly and pointing downward, but the oil wasn't able to do that.

Here are the two beards side-by-side:

There are two things to remember here:

Beard oil can provide some real shape to a beard, and it can make it look healthier and more organized. It can't, however, make it look as though you actually shaped and groomed it. The beard in the “after” photo looks a lot better, but not that much better—the beard oil isn’t a substitute for a good trim. That said, the beard oil still does a lot for the beard.

With that in mind, there's something else to remember: a beard oil's main function is not to shape a beard—it's to moisturize the beard. A beard, without any sort of beard oil or beard balm, can become a dry, wispy mess. Beard oil is meant to hydrate a beard, so that it's soft and pliable and healthy-looking. It does, in fact, look healthier, even on this kind of beard.

With that in mind, let's take a look some beard oil before and after pics in a better-kept beard, and see what the beard oil can do for it:

OK, here's the same beard model (Carl—hi, Carl!) after some beard-trimming. As you can see, he looks a LOT better—that first beard was good for motorcycle clubs and Viking times, but you couldn't take it to school or work. The beard below would be fine for school or work: 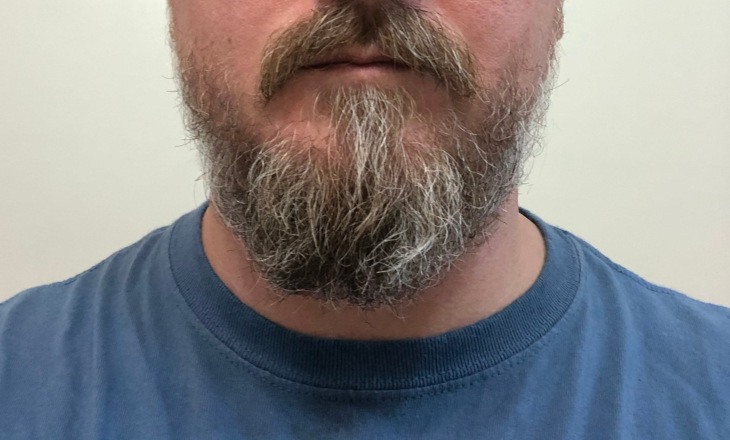 It's not perfect, though, so let's pick it a part a little bit.

It's a Bit Box-y on the Bottom. Some guys like that look, but he's not quite pulling it off, because the beard seems to be leaning towards the left a little bit;

The Mustache Droops a Little Bit. Some guys like that, and that's fine, but we'd like to get a little lift on the sides of that puppy, for a more "classic" mustache look; and finally

There Are Some Hairs Wisping Outward. That's to be expected from every beard, but you want to minimize that if you can—it looks a little sloppy.

For this beard, we're going to use one of our favorite beard oils—Jack Black Beard Oil (affiliate link)—which looks like this: 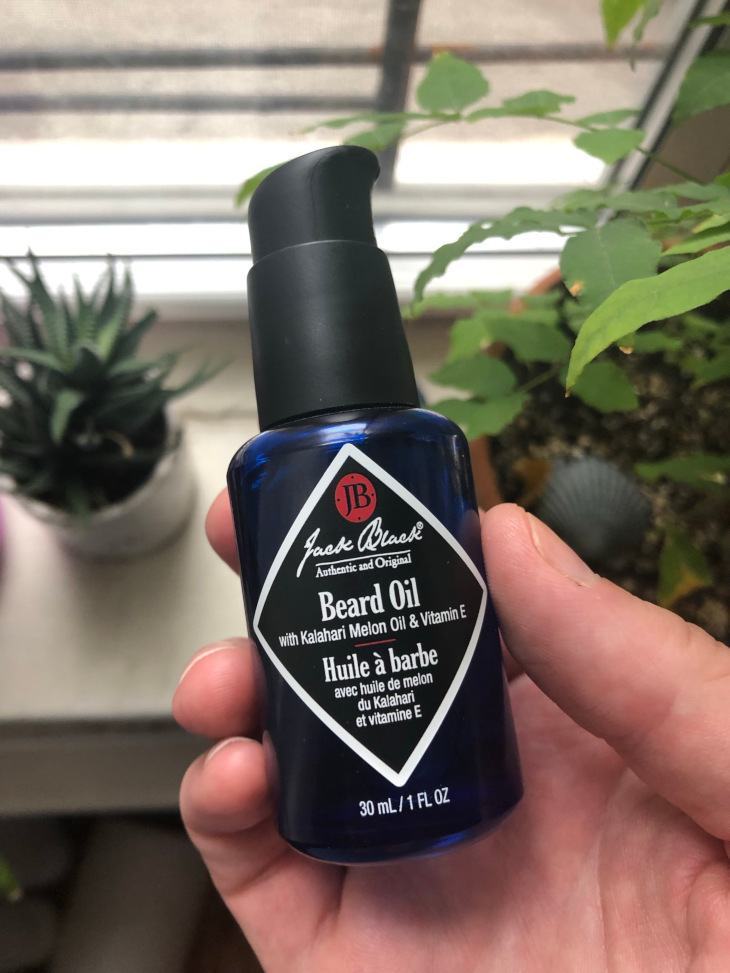 So how'd it turn out?

Well, it's not dramatically different, but there are some positive changes: 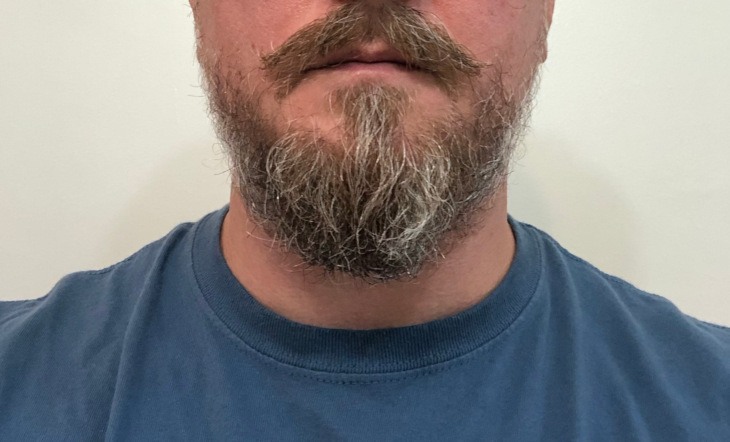 The Mustache Perks Upwards Nicely. The ends of the mustache are pointing ever-so-slightly upward, and that's great—it doesn't look showy, but it looks perky and awake;

The Soul Patch Points Downward. In the first shot, the soul patch is a little here-and-there, but the oil tamped it down nicely. Ultimately, the soul patch is a very small part of the beard, but it can really tie things together—and it looks gross when it's splayed outward. So it looks very good here; and finally

The Beard as a Whole Looks a Little Fuller. It's got a little more luster, and while it's not quite shiny—that would be too much—it's got a nice clean look to it.

Here are the two beards side-by-side:

On a shorter beard, the changes aren't as noticeable, but that's fine, because...

The most important thing a beard oil can do for you is moisturize your beard hair and hydrate the skin beneath it.

And, sure—the end result of that is a cleaner, healthier-looking beard—but the real benefit is a healthier hair and skin.

A Quick Note About the Beard Oils We Mentioned

They're two of our favorites, and they are:

Viking Revolution Beard Oil. Viking Revolution is one of our favorite beard companies—they make a whole slew of products, from beard oils to beard balms to beard brushes and beard combs, and their beard oil is top-notch. They make it in four varieties—Bay Rum (sweet), Sandalwood (the classic barbershop scent), Pine and Cedar (woodsy), and Clary Sage (earthy)—and we're fans of each. They also make an unscented version, if you're not into scents.

Jack Black Beard Oil. This is one of our favorite "treat yourself" options. Jack Black (no, not that Jack Black—we don't know who, but not that one) makes a lot of high-end beard and shaving products, and their beard oil is an *incredible* moisturizer. You wouldn't think one oil could be slicker than another, but in our experience, Jack Black Beard Oil really hydrates skin and hair.

There are plenty of other beard oils we like—and you can read about them in our beard oil rankings—but those two are among our favorites.

You'll Notice That the Beard Oil Provided Hold, But Not Much, and...

...if that's what you’re looking for—a beard product that will do more to keep your beard in place—then what you're looking for is a beard balm, and not a beard oil. Lots of guys confuse the two, so here's a quick run-down:

Beard oil is usually just that—one or more oils that hydrate a beard and moisturize the skin underneath it. It provides a *little* bit of hold, but not much.

Beard balm is usually a concoction of different oils, plus a butter (like cocoa butter or shea butter, that hydrate beard and skin), and a wax—usually beeswax, but sometimes also a wax called carnauba wax. That wax is the ingredient in a beard balm that can make your beard stay in place—and you won't find it in any beard oils, you’ll only find it in beard balms.

If you're looking for a beard balm, we have a few favorites:

Grave Before Shaver Beard Balm. GBS makes a wide range of balms that are designed to keep your beard in place, and they focus a lot of their energy on SCENT. Their Grave Before Shave Bay Rum Balm (affiliate link) is one of our go-to balms—it hydrates, it provides some hold, and it smells nice and relaxing.

We've done a few side-by-side comparisons, so jump on over to the search by and enter "before and after" and whatever beard product you're interested in.

Until next time—we hope this helps! Be good, have fun, and happy beard!