Beard products can be a little overwhelming: not only are there a lot of them—you’ve got beard oils, beard balms, beard jellies, and so on—but they're all a little confusing, and even after you’ve figured them all out, many of them are not what they seem when you actually use them.

Here we’ll discuss Bulldog Beard Balm, which is a great product, but actually a little more like a butter than a balm (and if that sentence confuses you, we'll explain it all below). Let’s dive in. 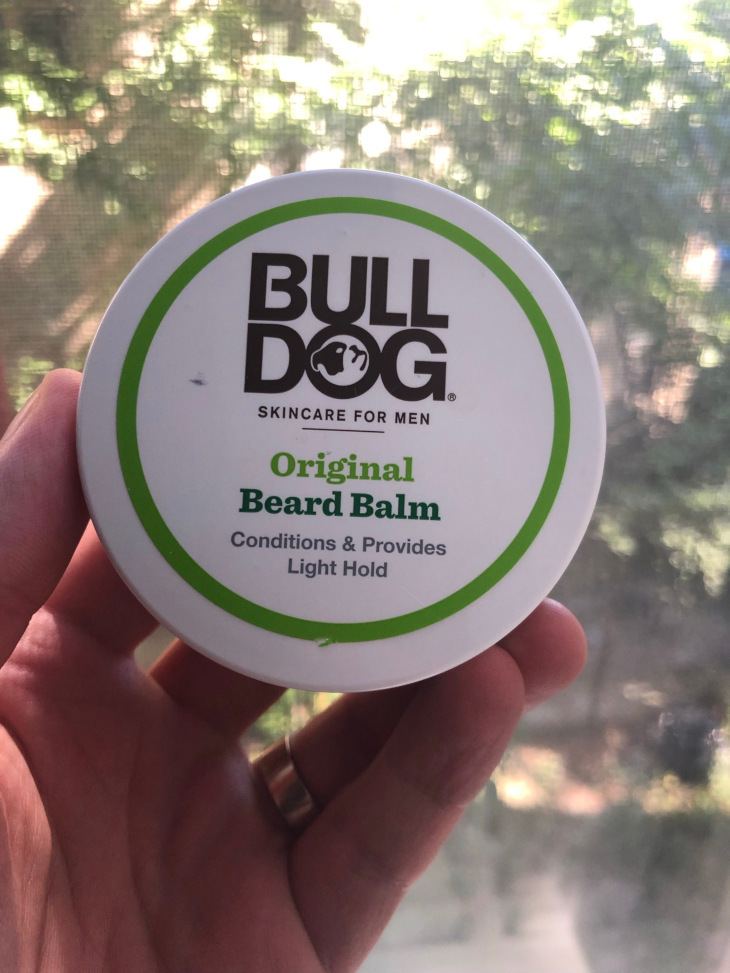 With some really great skin-and-hair ingredients—particularly aloe, camelina oil, and green tea—Bulldog Beard Balm does a very good job moisturizing a beard and making it look fuller/bushier. The formula doesn't include any wax—which makes it an oddity, because most beard balms include it—but that is/can be a benefit, because it makes it creamier, and easier to work into whiskers and onto the skin. The scent is faint, and that's wonderful—it's gentle, clean, and pleasant, and it can be a nice alternative to those beard balms with really aggressive fragrance that bowl you over all day. It doesn't provide a lot of hold (due to the lack of beeswax), and the container is a little small for a creamier concoction, which means it can run out a little more quickly than regular beard balms. All in all, we think this is a solid option if you're looking to moisturize a beard and maybe relieve some skin itch, and enjoy a light-but-masculine scent.

Alright, now for a closer look, with both the good and the bad:

It's Got Some Great-for-Skin-and-Hair Ingredients

It's always interesting to see the ingredients beard companies put in their products—we've reviewed hundreds of different grooming products at this point, so we have a pretty solid idea of what each ingredient does, and there are a few popular ingredients that get used again and again—but also a few stand-outs that only a few companies use.

It seems like the great majority of beard balms include shea butter, for its moisturization properties (and Bulldog Beard Balm has it); sweet almond oil, because it can give a beard a bit of sheen and make it look healthy (and Bulldog Beard Balm has it); and tocopherol, which is actually just Vitamin E, and has loads of benefits, particularly for skin. Those are good ingredients, and it seems like a looooooot of beard products contain them (a tocopherol in particular).

The three ingredients that make Bulldog Beard Ball stand out—and they ones they highlight!—are:

Aloe Vera. It easy to forget that in addition to moisturizing your beard, beard balms are designed to moisturize your skin (and that's fair, because they are called "beard balms," after all). Aloe Vera is widely known to have a ton of benefits for your skin, and can hydrate and relieve some beard itch, and it's a great addition to any beard balm—and it's kind of weird that more balms don't include it;

Camelina Oil. While not as well-known as Aloe Vera, is also great for skin and hair, and is known both as a moisturizer, and as a treatment for dandruff and flaky skin. Another great inclusion for a beard balm; and finally

Green Tea. This is another interesting inclusion, and there have been studies that show green tea can have anti-inflammatory potential, and that, too, is good for skin.

All together, those ingredients—plus the others in the formulation—add up to a very capable beard balm. It feels soft and light—more on that in a moment—and it doesn't feel greasy, which is a trap that a lot of balms fall into. It's easy to work into a beard, it felt like it absorbed pretty quickly, and the beard felt fuller and a little more bushy. It's pretty easy to wash out, too, which is also nice—and something else that's not true for a lot of typical beard balms (and, by the way—if you're interested, you can read our list of our top beard balms here). 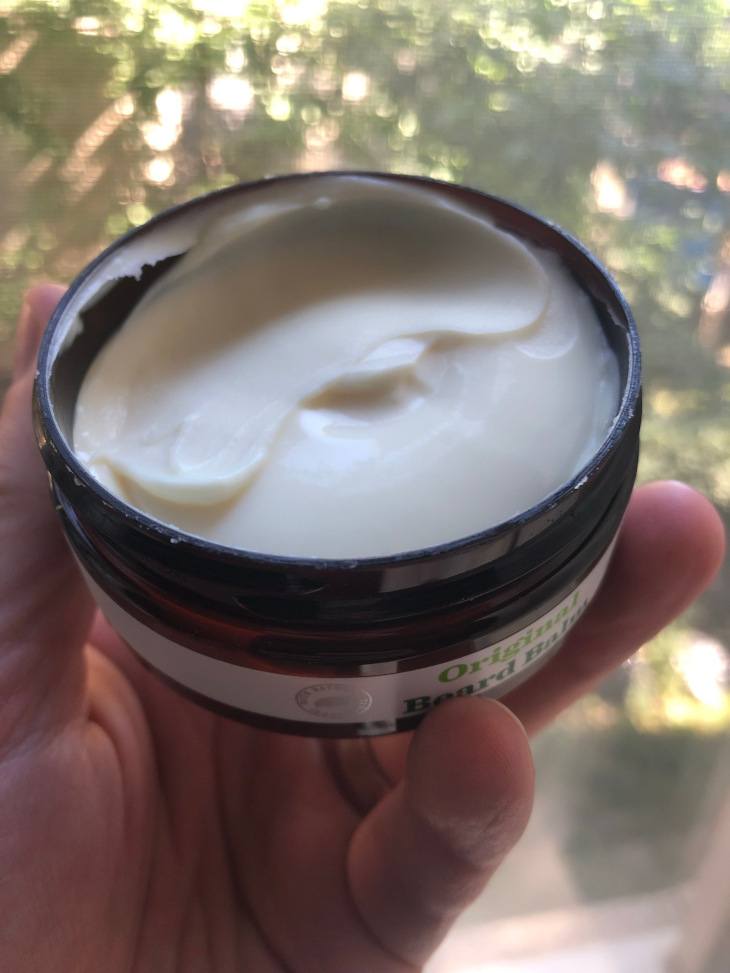 It Has a Great Texture—It's Smooth, Like a Beard Butter

Beard balm typically has a thick consistency, and that's because it almost always contains a wax of some kind. It's usually beeswax, but some companies use carnauba wax or candelilla wax, or a combination of all three and others.  Bulldog Beard Butter is a unique type of beard balm in that it doesn't contain any wax of any kind, and that gives it a smooth, creamy texture—very different than most beard balms.

The good news is, that lack of wax makes it *really* easy to work into your beard, and you don't need as much effort to work it into your whiskers and onto your skin. Some beard balms—particular those two with two or more types of waxes—can take a lot of effort to use, and it can take forever to work them into your beard (and to wash them out later). 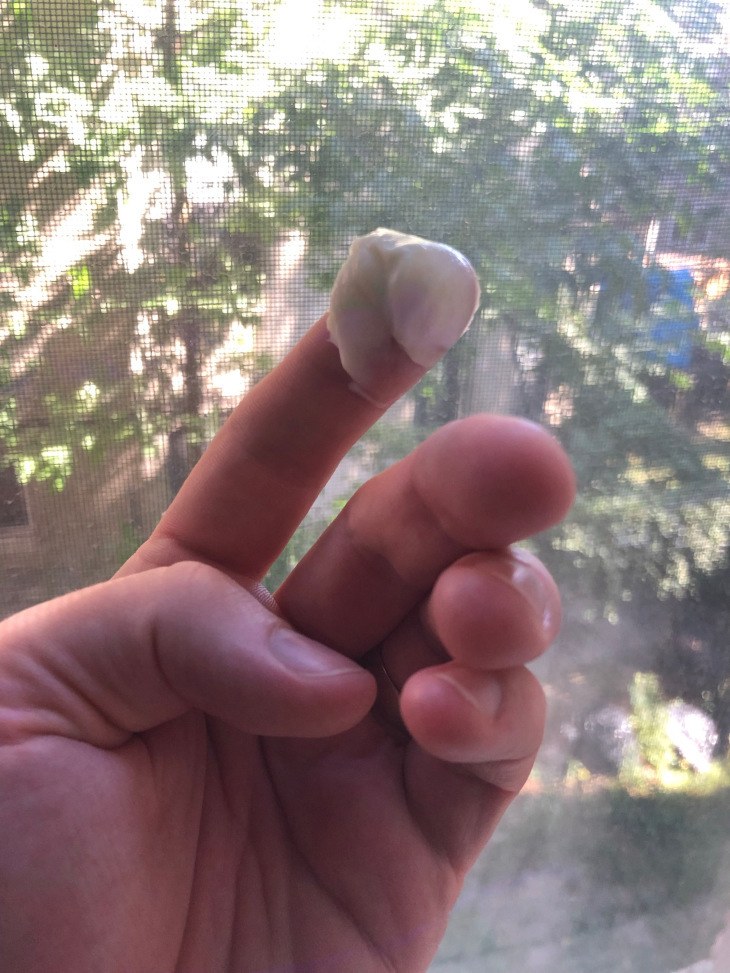 So, if you're looking for a more "traditional" beard balm, you may want to check out Viking Revolution Beard Balm—it's a more typical balm, with a higher wax content capable of providing a little more hold, and it has a bunch of ingredients that can moisturize your beard and hydrate your skin. We're big fans of their Viking Revolution Beard Balm Four-Pack (affiliate link), because it comes in four scents: cedar and pine, bay rum, sandalwood, and clary sage.

The Fragrance is Pleasant but Not Overwhelming

It's always difficult to describe signature scents—that is, the fragrances that companies make for their own products. It's hard to describe what a single smell can evoke, let alone many smells put together. So, we'll do our best:

This is a "clean" smell, but not soap-y; it's got a little hint of sweetness, but it's not at all perfume-y; it's natural-smelling, like an aloe, but without being earth-y or heavy. One of our wives said it's a little reminiscent of baby powder, and that makes sense. It has that kind of gentle feeling to it (and that sort of delicate-ness might not be what you'd expect from a product named "Bulldog," but it's what we got!).

The best thing about it is that it's not too aggressive—there are some beard balms out there that are pretty powerful, and putting them in your beard—and leaving them there all day—can be "a little much.” It can get distracting.

So, this can be a great option if you're looking for a beard balm, but you 1) don't want to get knocked over by the scent, but 2) want *some* scent, and don't want to choose a "fragrance-free" option. It's a good enough for a slight whiff of scent and not much more.

So, altogether—nice! It moisturizes really well, it's easy to use and can make a beard look healthy and hearty, and it has some ingredients that are known to be good for skin and hair. It also smells nice and isn't overwhelming in that way that many balms can be.

That said, there are a few mild criticisms we have, so we should mention...

As we mentioned, the consistency of Bulldog Beard Balm is a lot different than regular beard balms, in that it's a cream—it doesn't include any waxes, and waxes are what 1) make the formulation firm, and 2) provide a little "sculpting power" for your whiskers. As Bulldog doesn't have any beeswax, it's not the best option if you're looking for hold. It can tame a few flyaways, but when it comes to hold, it's not the best balm we've found, and some of the more traditional beard balms—like the Viking Revolution we mentioned above—can provide you with a bit more styling capability.

It Tends to Go Quickly

We mentioned above that this feels a little more like a beard butter than a typical beard balm, and that's a good thing—beard butters are awesome—but there's one way in which it's a drawback: it's packaged like a beard balm, in a smaller tin, and that means you can end up running out of it more quickly than you would a normal balm.

That idea takes a bit of explaining, so here goes:

Beard balms are usually thick, and a little goes a long way, so they come in smaller containers that are wide, circular, and usually pretty flat.

Beard butters, on the other hand, are creamy and fluffy, and you need a good bit of it to work into your beard, so they usually come in contains that are wide, circular, and TALL.

Bulldog Beard Balm comes in a container that's 2.5 ounces, and that's only a little bit bigger than the average beard balm tin—and it's a lot smaller than most beard butters out there.

Maestro's Beard Butter (which we'll talk about in a minute) comes in 6- and 8-ounce tubs, for that very reason—you need a lot of it, so you tend to go through it pretty quickly.

Again, it's not the biggest deal in the world, but 1) beards require a lot of upkeep, and 2) it seems like they *constantly* need more products, so if you want to be frugal with your dollars, it can make sense to go with an actual beard butter that comes in a larger container.

With that in mind...

If You're Actually Looking for a Beard Butter...

There are a few great ones on the market. Our two favorites are:

Maestro's Beard Butter (affiliate link), which has a great texture—a little more creamy than the Bulldog—and a really fascinating scent: it's grapefruit, black pepper, and bergamot (which is a citrus that smells like something between a lemon and a lime). You'd think that would be a really powerful smell, but it's actually really calm and stately—we use it when going to formal events or getting dressed up.

Every Man Jack Beard Butter (affiliate link), which comes in three different scents—sea salt and citron, sandalwood and vanilla, and hemp + clary sage + bergamot. The hemp formulation is actually a surprisingly good option, because it can relieve dry beard and/or itchy skin—the non-THC help seed oil is a great moisturizer.

Unfortunately, beard butters are a little more rare than beard oils and beard balms, and there just aren't as many out there, so your choices are a bit limited. We think those two are fantastic, though.

If you really want to get wild, you can try a beard jelly, like Bossman Beard Jelly (affiliate link). That's actually one of our favorite beard products—it's *really* easy to work into your beard and onto your skin, and as far as we know, Bossman is the only company that makes a beard jelly.

That's All We Got for You Right Now

As far as balms go, Bulldog is unique, and we think it's a great option if you 1) aren't crazy about the firmness/waxiness of regular balms, and want something easier to use, 2) are looking for something with a *hint* of scent, and 3) want a very capable beard and skin moisturizer. If you're looking for sculpting capability, you may want to opt for a more traditional wax (like Viking Revolution).

There you go—we hope something in our Bulldog Beard Balm review helped inform you. Be good, have fun, and happy beard!

Beard Balm: Before and After Pics