Viking Revolution! What does that name mean, exactly? We don't know. Is the company named after a particular Viking revolution? Or does "revolution" simply general Viking shenanigans? We're not sure, and we checked on Viking Revolution's "About" page, but they told us nothing. So maybe we'll never know.

What we do know is that we like (most of) their products a great deal, and here we'll discuss their beard balm four-pack. Does it contain the bests balms we've ever used and we're in love with them? Or are they the absolute worst and we hate them? We're sure the suspense is agonizing for you, so details and more follow in our Viking Revolution Beard Balm review below.

We'll start with the most important aspect of a beard balm, and that's the ingredient list: 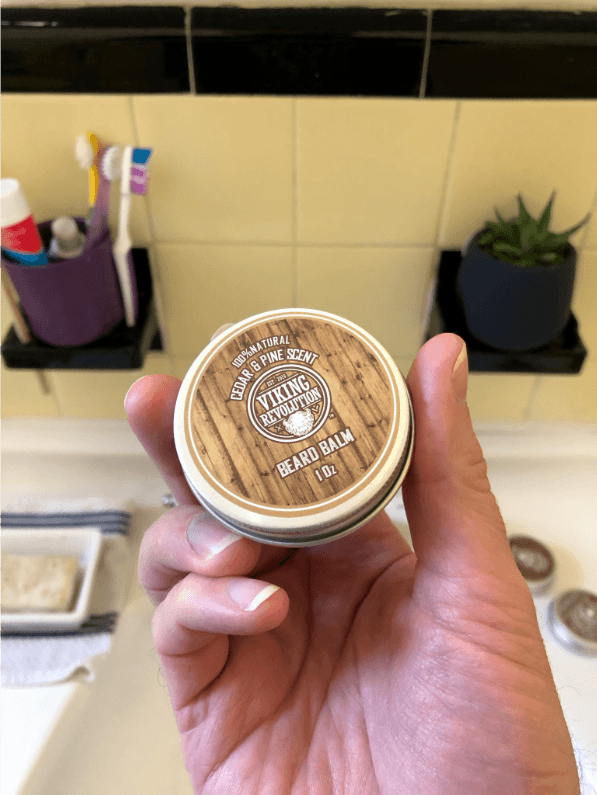 The Formulation is Brief but Full of Good Stuff

(Note: for whatever reason, we couldn't find the recipe for bay rum on the VR website. Kind of odd they didn't include, but whatever.)

There are two great things about these ingredient lists:

1) They're chock-full of great things. Argan oil imbues moisture into both skin and hair, and it's including to give your beard a fuller, healthier look, and jojoba oil—one of our favorite ingredients—is actually really similar to the oil (called sebum) your skin naturally products, and it can help to unclog pores and regular balance.

You'll notice that the ingredients are pretty similar across all three formulations—they only way they deviate is in the scent ingredients. That may be why Viking Revolution is able to keep all of them feeling "light" on the skin (and we'll talk about that later).

It Features a Nice Range of Scents

There are a lot of companies out there that make beard balms, and it's interesting to see how each company approaches scents. Some get really creative, whereas other companies tend to keep it simple, and stick with the basics. That's the choice Viking Revolution opted for, and they got a nice round-out of "bright" scents (and that would be the Cedar and Pine), "earthy" scents (that would be the Clary Sage), and "mellow" scent (the Bay Rum), and clean/"classic" scents (which would be the sandalwood). Here's how it shakes out, in our experience:

> Viking Revolution Beard Balm Cedar and Pine Scent: Most beard companies usually opt for a fir scent or a pine scent, and we're glad that Viking Revolution went with cedar and pine. It's gentle—some balms really embrace the "forest" idea and go heavy on the cedar/pine/fir, and overdo it—but this is pretty gentle. This smells, to us, a little bit like a candle, somehow? But in a good way.

> Viking Revolution Beard Balm Clary Sage Scent: Most sage balms are pretty mellow, and that's the case here. It's not like the experience of sniffing some sage from your kitchen spice rack—it's much, much, much more toned down. It has kind of a sweet, fragrant smell, but not soapy.

> Viking Revolution Beard Balm Bay Rum Scent: This is a commonly misunderstood scent—people hear "rum," and they think party! / excitement! / good times!, but our experience of this scent is a lot more relaxed. It's got a nice, mellow scent, that's sweet and calming, and there's even a little hint of cinnamon in there. This was a nice surprise, because it's not a "typical" bay rum. Very pleasant.

> Viking Revolution Beard Balm Sandalwood Scent: Of all the scents, sandalwood is probably the best-known, most old-school scent. The word that's usually used to describe sandalwood is "clean," and that's appropriate. It has a fresh, tidy scent, that's not antiseptic. People also describe this is the smell you experience in a barbershop, and that's probably right too.

So, that's a nice mix! Some lively and bright, something earthy, something mellow, and a good-old classic scent. Keep in mind, none of the scents are very powerful—but that's not a critique, rally; beard balms usually have a somewhat muted scent, and they're not like beard oils, which tend to be more robust.

What's interesting, though, is what the Viking Revolution packet doesn’t include: 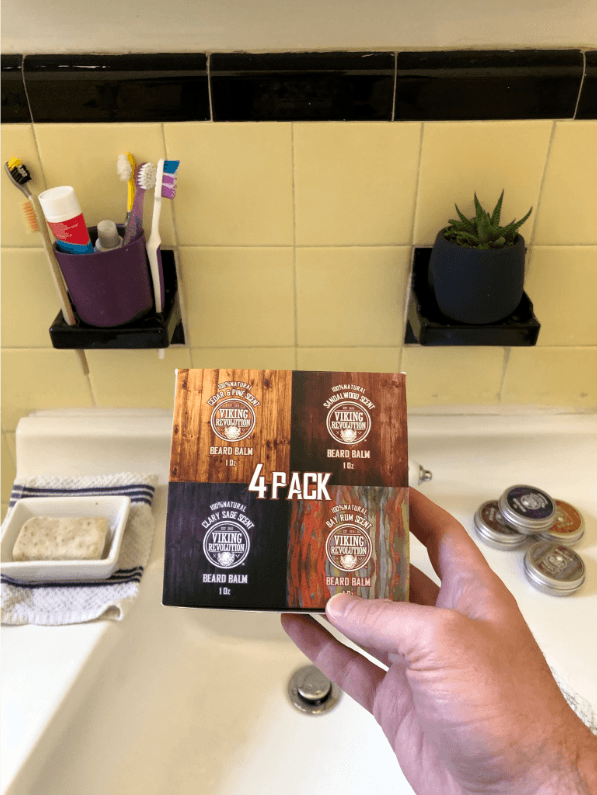 The 4-Pack Doesn't Include Viking Rev's Main and Most Popular Scent, and...

...that's kind of weird! We're not sure why they omitted it. Maybe five balms is harder to fit in a package and mail? Maybe they have enough people wearing their main scent, and they want to push the others? We're not sure.

In any event, their main beard balm—Viking Revolution Beard Balm—has a citrus scent. As we mentioned above, the scent isn't very strong—when people hear "citrus," and they usually think of a strong orange/lemon/lime smell they get from fruit—but it's more like a "hint of citrus." It's pleasant, but it's not going to knock you over.

Next up in our Viking Revolution Beard Balm review:

That's a nice surprise. Balms, after all, are made with ingredients that can weigh you down a little bit—usually shea butter and/or beeswax—and even when they feel great, you can definitely feel them on your face. Some people don't like that, but it drives some people crazy (and that feeling is not uncommon with some lower-tier beard balms). That greasy, stuck-on-your-face feeling can be awful.

Viking Revolution actually feels pretty light, and that's fantastic. It doesn't feel like it coats your skin or your hairs, and that's a real "pro" for Viking Revolution. We think—we're not sure, but we think—that's because there's no shea butter in the recipe. Shea butter gives a balm a LOT of hair and skin benefits (and that's why so many beard companies use it in their balms), but it can give balms a weighty / greasy feeling.

The ingredient list, as we mentioned above, is pretty sparse, and that may imbue it with that "light and airy" feel. Whatever the reason, we think it's one of the best aspects of the balm.

That said, the lack of shea butter does come at a price, because...

It's Only OK for Hold or Sculpting

While it might seem obvious, it's worth noting that beard balms are not all made the same way. Not only are their ingredients difficult, but even among beard balms that use the same ingredients, the AMOUNTS of those ingredients can vary widely. One of the most common ingredients in beard balm is beeswax, and the amount of beeswax used has a great deal with how "binding" the balm is.

We don't have exact numbers for this—mainly because beard balm companies are required to tell us the ingredients in a recipe, but not the amounts—but we suspect that Viking Revolution doesn't have much beeswax in it. That's not to say it doesn't have other great stuff in it—it does—it just doesn't seem to have a lot of beeswax in it.

So, if you're buying this solely for its sculpting properties, we might suggest you look elsewhere. Cremo Beard Balm offers pretty decent hold, and if you're really looking to keep your beard (or even just a section of it) in place, you can always option for a beard wax (and we usually recommend Honest Amish Beard Wax for that sort of thing).

The Scent Doesn't Last for Too Long

...so you may need to reapply. If we had one critique of beard products as a whole, it's that scents seem to flitter out pretty quickly. That, in our experience, is true here. It may be because of that lightweight formulation—maybe more shea butter and more beeswax would keep the scent for longer—but for whatever reason, the scent seemed to wear off after a while.

Again, we realize that may actually be a pro for some folks—not everybody loves scent in their face all day long—but it's definitely something we thought we'd mention.

The Tins in the 4-Pack are Single-Ouncers

(NOTE: This pertains to the tins in the four-pack, and not the tins that are sold solo, which are usually two ounces).

This is important to mention, because a lot of people overlook it: the tins in the 4-pack are 1-ouncers, instead of the usual 2-ouncer. Most beard balms are sold in those 2-ounce tins, and if that's what you're looking for, this ain't it. Not much more to say about that... or anything else, actually, so...!

To sum up: we think Viking Revolution is a great option, because 1) It's got a very pleasant—although somewhat muted—scent profile; 2) it has a short-but-great ingredient list; and 2) it has a nice, light-weight feel, and doesn't feel like it's coating your skin or hair. It's not great for hold, but in all other respects, we like it a great deal. We hope that helps—good luck, have fun, and happy beard!