Before we jump into our Striking Viking Beard Balm review, we should probably mention:

There are a lot of beard brands that use the word "Viking." There's Viking Revolution, Viking Honour, and Smooth Viking, and there's probably a dozen more. That makes sense—Vikings were famous for only a couple of things, and beards were definitely one of them, so why not? It's a pretty easy way to get people to understand what you're about.

"Zeus" is another popular one—Zeus was all about throwing lightning bolts and growing his beard as long as he could, so there are a lot of products named after Zeus. It follows, if you think about it.

Here we're going to discuss Striking Viking, and their beard balm, and in particular, the Striking Viking Beard Balm Four-Pack. It's an interesting product, and they took a really unique approach to the fragrance they imbued into their balms.

It's probably the most unique thing about their beard balm, so we'll start there:

Their Scents Are... Very "Very"

That's not the case here—moreso than most other beard balms we've used, the scents that Striking Viking includes in their four-pack REALLY smell like what they're trying to smell like. Here's how it shakes out:

Vanilla. As far as scents go, vanilla is a very popular option for all sorts of beard and male grooming products, because it's well-known, it's sweet, and it's inviting. But what you usually get is a "vanilla extract" smell—that liquid-y vanilla smell you get from baked goods. And that's great, and a lot of people like it, but that's not what we experienced here—this is less like vanilla extract, and more like vanilla pudding pop (in fact, upon first usage, it seemed like it would be a delicious thing to eat. Obviously, don't eat this). It's a REALLY exaggerated vanilla scent, much sweeter than most other vanilla beard balms. Some people will like that, and some people won't, but it's a really interesting decision by Striking Viking.

Sandalwood. This is another scent that's used often in beard and shaving products, and that's for a reason—it's a scent that's very common in barbershops (and in fact, a lot of guys actually describe this scent as "barbershop"). It's usually clean and calm and quiet. This, however, is not like that—it's a little more floral and perfume-y, and one of our wives actually said it smelled like sen-sen (licorice), which was surprising. It's not a typical sandalwood (and if you're looking for a traditional sandalwood beard balm, we'd recommend another Viking—The Viking Revolution Sandalwood Beard Balm, which smells more like what people expect from sandalwood).

Citrus. This is our favorite of the bunch, because it REALLY smells like citrus. Orange, to be exact. Very often, you get a citrus blend, and it's reminiscent of citrus, but not quite there—and that's even for stronger citrus scents, like verbena lime. This is very sweet and over-the-top—it actually smells a little bit like one of those orange creamsicle bars you get when you're a kid, and it's really pleasant and enticing. This, too, keeps with Striking Viking's apparent aim to make their sweet scents smell REALLY sweet.

Cedar. This one is a little odd—in the tin, it didn't smell like anything at all, and that's weird, because cedar/pine/fir scents usually smell really strongly (and it's one of the reasons companies that make beard balms include it—it's pleasant and it's noticeable). But while it didn't smell like anything in the tin, when we used it, it smelled like a campfire, somehow. We don't know how they did that—and we also don't know if that's how other people experience the scent, because the experience of scent is wildly personal—but that's what we got. It was a pleasant smell, to be sure—just not what we usually get with a cedar smell. Usually they're a lot more "pine-y," and this wasn't. Very unique.

What's fascinating about these selections is that they seem like the scents you'd get in other four-packs—most packs usually have a sandalwood, and a citrus, and some kind of outdoors-y fragrance—but Striking Viking's take on all these scents is really unique and unexpected.

We really like that difference; others may not. As we mentioned earlier, scent is amazingly subjective, so here's how we'd summarize things: it can be worth a look if you're 1) really into sweet scents; and/or 2) looking for scents that are a very different take on the "norm"—that is, what most other beard balm companies make. 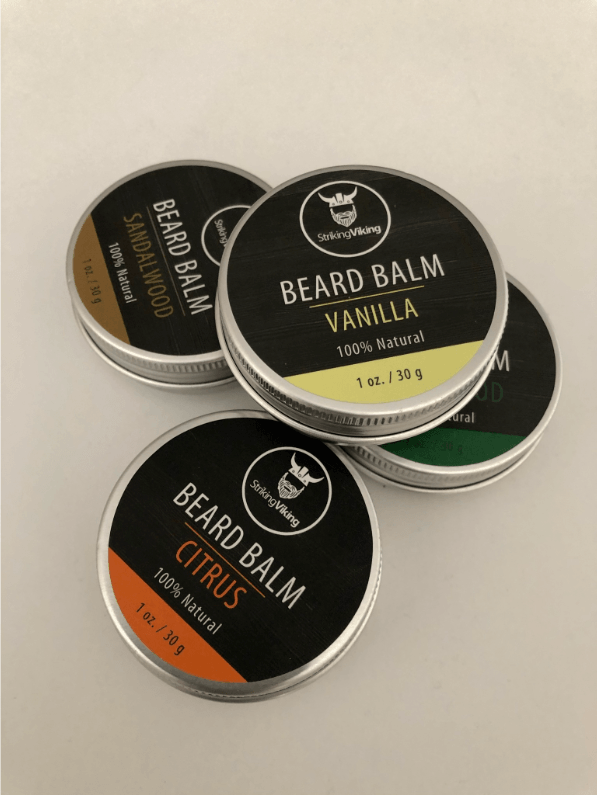 With All Talk About Scents, We Should Mention They Make an Unscented Version

We just gabbed on about all the scents and how powerful they are, but it's worth mentioning—especially because so many guys don't want scent at all—that Striking Viking also offers an Striking Viking Unscented Beard Balm. That unscented version—just like the scented ones—is actually a really good balm, and it looks like we haven't really talked about that yet, so...

It Does A Great Job of Moisturizing

We tend to get hung up on fragrance, but the real job of a beard balm is to 1) moisturize your beard, and keep it from feeling dry and hay-like, and 2) hydrate the skin underneath your beard.

Striking Viking—in our experience, anyway—does a very good job of both. Upon application, it's not greasy or runny, it melts pretty easily between your hands (and that's probably because of the high oil content, which we'll talk about in a moment), and it's relatively simple to work into beard hair. It's kind of a trick to get it onto the skin, but that's really true of most (if not all) beard balms. It takes a little bit of effort to work it onto the skin.

The nice thing is, the balm seemed to do its job even the next day. After application, a few hours of wear, a shower, and then a night’s rest, the beard still felt bushy and moisturized the next. That's really all we can ask for, and we imagine balm worked so well because...

The Got Some Great, All-Natural Ingredients

As per their website, the folks at Striking Viking attest that their beard balms are made from made from all-natural ingredients, including:

This is a fantastic line-up of natural ingredients, and there are a few things that stand out to us about this formulation:

> First and foremost, it's all-natural. That's great. There are a few balms out there—typically older ones, like Clubman Pinaud—that have a lot of synthetic ingredients, but this is juuuuuust natural stuff. That's fantastic.

> Shea butter is the first ingredient, and it's a great inclusion—it's a powerful moisturizer that can really imbue a good deal of moisture into a beard, and give a lot of bushiness and shine.

> Beeswax is right behind it, and that's noteworthy too—usually, a wax comes later on in the formula, making it a little weaker. Striking Viking actually provides a good bit of hold, and that's a nice surprise, because a lot of beard balms don't; and

> It has a lot of oils—grapeseed, argan, jojoba, coconut, and cedarwood—but it doesn't feel slick or fatty. The shea butter and wax content must be very high, because this didn't come across as greasy.

The only bummer is the grapeseed oil—that can sour a little more quickly than the rest of the ingredients, meaning that the balm could expire sooner than balms that don't feature grapeseed oil. So, just to be safe, give it a sniff before you use it, and make sure it's still good.

Other than that—nothing to complain about. That's a really solid line-up of ingredients. 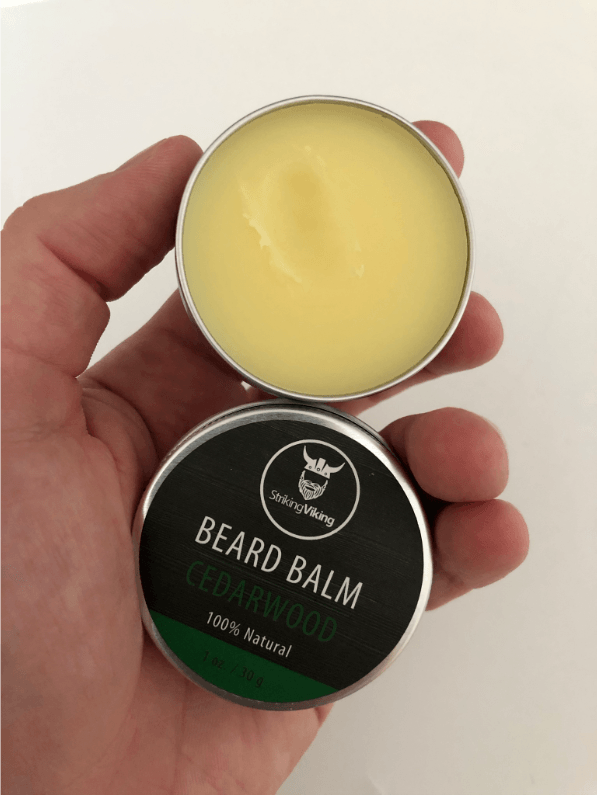 At the end of the day, we just really love having a beard and using beard products, so most of our reviews sound a little gushy (and we tend to only review products that we like in the first place).

That said, if we had to provide some criticism in our Striking Viking Beard Balm review, we'd say that the scents probably aren't for everyone. If you only love classic sandalwood, classic vanilla, and the classic take on citrus—which we would describe as "whiff of citrus" rather than "juicy orange in your hand"—then you might not like these. Or you might like their spin on it—who knows. Appreciation of scent is really tough to predict.

The only other criticism we'd offer is that the logo is... a little bit lazy. When you think STRIKING VIKING, you think of axes and long beards and hair and muscles and that sort of thing. Norwegian Death Metal, in other words. The Striking Viking logo is just basically a line drawing of a Viking with a horn helmet. It looks nice, but it's kind of bland. If *we* were in charge, we'd have a logo of a Viking with a huge beard and a sword getting struck by lightning, or something like that. Liven things up a bit.

That, of course, is absolutely neither here-nor-there, and the most important thing is how the balm works, and if asked, we'd say, "It works very well."

The Viking is Striking

So, there you have it! A great balm, great moisturizing capability, and delivered with some really unique takes when it comes to scent. That scent might not be for everyone—and if you're looking for a more traditional line of scents, also in a four-pack, we'd suggest the Viking Revolution Sandalwood Beard Balm—but other than that, a quality pick.

We hope that helps—good luck, have fun, and happy beard!