Clubman Pinaud is a fascinating entity: in the world of beard care products, most companies are only a few years old, and many of the "senior" members are about a decade old. Clubman is more than two centuries old, and there some real pros—and some cons!—that comes with age.

Clubman Beard Balm has a lot going for it: it's got the "classic" barbershop scent that's clean and crisp and refreshing. It's also got a surprising amount of hold, and an almond-sized dab of it can provide some real sculpting potential for medium-sized beards (larger beards will obviously take a lot more). Clubman is an older company, and the ingredient list has some chemical-y ingredients in it, so you may want to check out some alternatives if you're looking for a more all-natural product (and we discuss suggestions below). Overall, a very good formulation, and one that provides more hold than most beard balms out there.

Our Absolute Favorite Thing About Clubman Beard Balm, and All Clubman Products

...is that it is *the* classic barbershop scent. If you've ever experienced that fresh-out-of-the-barber's-chair scent, Clubman is very similar to that scent.

In fact, Clubman may actually be that scent—after all, a loooooot of barbershops use Clubman products. Not only have they been around forever—the company was founded in 1810 in France, more than two centuries ago, which makes it only 34 years older than the United States, and that's wild—but they feature a wide range of products, including their Clubman Pinaud Powder (affiliate link), which is a stable at American barbershops. Have you ever gotten a haircut, and the barber whisks off your cut-off hairs from the back of your neck and powders you off? Chances are very strong he was using Clubman Pinaud Powder.

So, the scent is perhaps one of the most "old school" scents you'll find out there, and a lot of guys love it for that reason. It's cool, clean, and refreshing. It may not have a great date-night vibe, or "going out" vibe, but for everyday usage, it can be a great option.

We should mention, if you're not familiar with that classic barbershop scent, we'll try and describe it: it's a mix of very light menthol—that kind of cool, minty scent—along with a very light soapy scent. It's not perfume-y, and it's not too powerful, but it is a "wakeful" scent that people often describe as energizing.

Con: There Are a Lot of Straight-Up Chemicals in the Ingredient List

If you look at most of the beard products that have popped up over the last decade, you'll see that many of them market themselves as all-natural, organic, non-GMO products. This is true for beard balms, but especially true for beard oils—manufacturers of these products seem to take a lot of pride in using naturally-sourced, "virgin" ingredients.

And that makes sense—if you're using it in your hair, and rubbing it into your skin, it makes sense to use all-natural ingredients. And if you've got sensitive skin or allergies, it DEFINITELY makes sense, and using products with the wrong ingredients can wreak havoc on your skin, or worse.

Clubman, on the other hand, came around waaaaaaaaaaaaaaaay before that "trend to natural" came around. Like a lot of products that have stood the test of time, it's ingredient list features may more odd-sounding, chemical-y ingredients than you'll find in newer products (and this is true of most of Clubman's products, by the way).

As you can see, it's all oils and butter and wax, and even the single chemical-y sounding ingredient—d-Alpha Tocopherol—is natural (it's another name for Vitamin E).

Now let's compare that to the old-school Clubman recipe:

There are a number of natural ingredients in there, for sure, but there are some non-natural chemical compounds as well. Propylene Glycol, for example, is a synthetic that absorbs water, and it's used in a wide range of cosmetics. The FDA has classified it as "generally recognized as safe" but it's a synthetic ingredient, and if that's not your bag, it's worth knowing about.

There are some good aspects of synthetic ingredients, though, and that leads us to our next section of our Clubman Pinaud Beard Balm review: 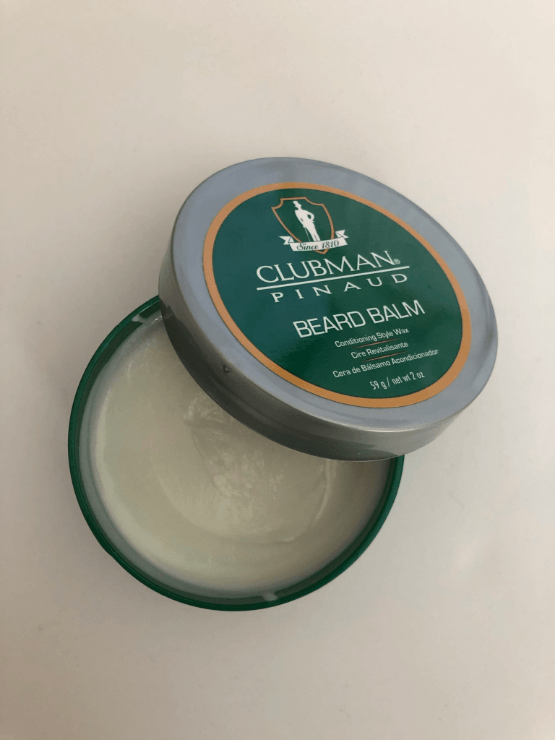 That sounds like something all beard balms should be able to do, but that's not the case—some focus more on hydration (like the Viking Revolution Beard Balms), and others on fortifying beard strength with nutrients (like Cremo Beard Balm). Clubman is actually a real stand-out when it comes to shaping, and we think that's fantastic.

There are some things we should note, though, because that styling capability makes it different from other balms, and you may want to keep in mind the following:

> It feels different. It's a little more tacky, and it feels a little more—creamy?—than other balms. Other balms—perhaps because of their high wax content—"chip" a little when you scrape them out of the tub, but Clubman's balm is a little more... gooey, for lack of a better term.

> Because it's a little more gooey, it takes a little more work to integrate it into your beard. Other balms penetrate your beard hairs with more ease, but you're probably going to need to work this in a bit. That's not a problem, and any true styling agent is going to take a little bit of effort, but it's worth noting—and it's worth noting that a beard comb (one with wide-set teeth) can help you in that endeavor.

> There are a lot of balms that aren't a good match for longer beards. They just don't provide enough support, and that's a bummer. If you've got a very long beard, Clubman can actually be a solid option:

Your results may vary, of course, but there you go.

Small Complaint: The Tin is a Bit Tall

And here's what we mean by that: The tin—or in this case, the plastic tub—that contains the beard balm is actually a little large, which makes it less-than-ideal for toting around during the day. Most beard balms come in tins/tubs that are wider and flatter, so you can put them in a back pocket or a jacket pocket, and that's wonderful if you want to re-apply it during the day. The Clubman Beard Balm comes in a tub that's actually pretty tall, and it can make it difficult to store on your person.

It's the biggest deal in the world, but if you're somebody who likes to reapply beard balm during the day—and guys with really long beards often do—just a heads up.

Beard balm is... well, it's for beards. It's for facial hair that's got some length to it. There seem to be a few beard balms out there that suggest users should start using their balm as soon as there's any growth at all, and that's not right. Even if the balm provides some skin-moisturizing properties, a beard oil (or a simple moisturizer) would be a much more suitable pick.

So we appreciate the following instructions from Clubman's Beard Balm page: "Begin using beard balm 2-3 months after you start growing your beard." Way to be, Clubman! We appreciate your honesty!

Alright, that about wraps it up for Clubman Beard Balm. We think it's a great option if you're looking for a classic scent that provides a very decent bit of hold, but you may want to look elsewhere if all-natural ingredients are very important to you. Alright—good luck, be good, and happy beard!