You may have heard of Clubman Pinaud—they've been around for a long, long time, and their products have a very memorable scent—and they're in a LOT of barbershops. It’s actually kind of difficult to avoid them.

They're probably best known for their aftershave, but they've got colognes and shampoos and shave gels, and we recently picked up one of the lesser-known offerings: their beard oil.

It has a lot of fans, but... is it worthwhile? What does it smell like? And what does "Pinaud" even mean?

Below, we’ll provide our Clubman Pinaud Beard Oil review, and dive into each issue and do our best to answer all your Pinaud-related questions. We’ll start with some thing we like, and then complain a little bit, before wrapping everything up.

Pro: It's Got Some Great Ingredients That Are Actually Pretty Unique in Beard Oils

The ones we don't usually see are the three that are in Clubman Beard Oil: macadamia oil, maringa oil, and kukui nut oil. Those are pretty rare for a beard oil, and they each offer some pretty fantastic qualities:

> Macadamia oil has a lot of linoleic acid, which is believed to have skin rejuvenating properties;

> Maringa oil is pretty gentle, and it acts as a barrier to help seal moisture in your skin; and

> Kukui nut oil isn't actually really well-known, but it's a Hawaiian oil that contains essential fatty acids, vitamins and antioxidants, all believed to be good for skin and hair.

That's a nice trio right there, because in addition to making your beard look full and hydrated, beard oil is designed to give you skin some nourishment. We tend to forget that and focus on the beard-fortifying aspects of oil, but it's also about skin are, and those three oils can soothe dry skin, prevent flaking, and relieve some of the itching that comes with owning a beard. More than anything else, those ingredients are our favorite aspect of Clubman oil.

Pro: It's Noncomedogenic—Meaning It's Designed Without Ingredients That Can Give You Acne

We absolutely love this feature of Clubman's beard oil—it's made from non-comedogenic ingredients, meaning that the ingredients in the formulation are not known to cause acne. That's a great feature, and it's interesting, because a lot of beard oils use all-natural ingredients that are not known to cause acne, but they don't really discuss that as a benefit of the beard oil. We're not sure why—you'd think those other beard oils would advertise that feature, because using a product that doesn't cause acne is really, really important to a lot of guys.

Anyway, the ingredients in Clubman beard oil are not known to cause acne, and that's a wonderful thing.

Before we go on, though, we're going to ask you to re-read that last sentence, because it's important. Here it is: "the ingredients in Clubman beard oil are not known to cause acne."

There's the rub. The beard oil doesn't fight acne—it simply doesn't use ingredients that are known to cause acne. There's a subtle but very important difference. The word "comedogenic" means "acne-causing," and believe it or not, a LOT of beauty/grooming products use ingredients that cause acne. Beauty/grooming products do this because 1) those comedogenic ingredients serve another function—they either make the product last longer, or give it a certain texture, or a certain color, something like that, and 2) only some people get acne because of these ingredients—the great majority of people are OK with these comedogenic and don't break out—so it’s worth it to the beauty/grooming companies to use them, even if some people break out from them.

So that's what "noncomedogenic" means—it means it doesn't cause acne, and if you have acne, it doesn't necessarily mean it'll get rid of it. It just means that it doesn’t directly create acne.

Sorry for the long explanation, but we want to be very clear about that (and if you'd like to read more about comedogenic/noncomedogenic products, you can do so here.

Now to those mild complaints we mentioned earlier: 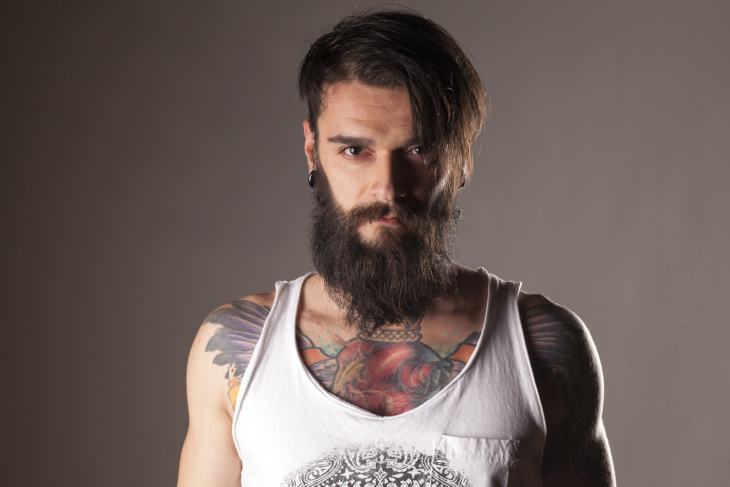 Con: Clubman Doesn't Offer the Beard Oil in a Wide Range of Scents; In Fact...

...they only offer it in one scent, and that scent is "Clubman Pinaud." It's their signature scent, and it represents an old-school approach to masculine scents. Brands used to have a single scent, and that's what they offered. The whole idea of dozens of different scents—and there are a lot of beard oils in a variety of creative scents, with citrus, liquor, coffee, lavender, and so on—that whole idea of different scents is pretty new. Older brands like Clubman Pinaud—which, as we'll discuss in a moment, is a very old company—tend to stick to single, classic scent.

So, what does it smell like? Well—some people have said it has a "barbershop" smell, and we think that's actually not far off. It's got a sort of cologne-ish smell—maybe a little bit menthol-y?—but not overbearing (and it's worth nothing, it doesn't last that long either). It's not musky, really... in its most general terms, we would describe it as an old-school, masculine-but-gentle scent. Very pleasant, in our humble opinion, and it smells like a lot of their other products, which is GREAT. Sometimes you don't want a bunch of scents jumbled together, you want to go with a single scent signature.

So while we give it a thumbs down in terms of variety, we do like that all the scents match. That's fantastic.

Before we jump to another “Con,” we actually have one more “Pro” for our Clubman Pinaud Beard Oil review:

Pro: There Are Dozens—Literally Dozens—Of Grooming Products in the Pinaud Line

Believe it or not, as a company, Clubman Pinaud is more than 200 years old. You read that correctly—200 years. They were founded in 1810, which is just two or three decades after the founding of our country. It's kind of wild, when you think of it in those terms.

Anyway, in the ensuing two centuries after their founding, they've made quite a few products, from fragrances to creams to masks to razors and shavers. They even make quite a bit of tonsorial gear, and you may have seen their products in your local barbershop.

Here's why we mention this as a "pro": a lot of guys—ourselves included!—exhibit a lot of brand loyalty. If one product is good, they want to explore other products from the same company. We're like that, and we loooooove a company with a deep line of products (and sadly, a lot of beard/shaving companies don't really have a wide product list).

Clubman does have a wide product list, so if you find that you like their beard oil—and in particular, its scent—there's plenty else to explore (and much of it has that signature Clubman scent).

Con: It's Got Some Ingredients with Some Funny Names

This is worth nothing—it's not as organic as many other formulations, and it's got some long-named ingredients that you just don't find in most other beard oils. There have been literally dozens of new beard oils that have come to market over the last decade or so, and the overarching theme to almost all of them is that they're all-natural. Most just use a handful of ingredients and that's that.

Clubman is, as we've mentioned, an older brand, and they may not have seen the need to switch things up. The two ingredients that they use that are Cyclopentasiloxane Dimethicone and Phenyl Trimethicone. Cyclopentasiloxane Dimethicone is considered safe for the skin, and is known for its emollient and water-binding properties, and Phenyl Trimethicone, also considered safe for the skin, is known for its haircare properties.

These ingredients are safe for most people, but there's been a push in recent years against using chemical-y sounding ingredients in hair and skin care products—and, of course, your beard oil is going to go right on top of and into your skin—so we thought we'd mention it. Some guys really don't like that sort of thing, and want to stick to all-natural formulations.

Again, not a big deal to most guys, but something we thought we'd mention.

Pro/Con: This is an "Accessible" Formulation

We kind of hinted at this "con" in the last section, but we'll be more explicit here: despite a relatively classy-sounding name, Clubman Beard Oil is not a super-deluxe, and there are plenty of higher-end options available, if that's what you're looking for. It doesn't have a lot of the fancy ingredients that some other "gourmet" formulations include, such as jojoba oil, Vitamin A, Vitamin C, Vitamin E, and some guys really want that sort of thing.

This is a more basic concoction, but we don't want to list that as a straight-up negative—this is the kind of thing that's great for everyday use. Some of the higher-end options are simply not. When you think of a deluxe option like Tom Ford Beard Oil, which is super deluxe—most guys can't wear that every day. Clubman Pinaud is actually a really great option as a go-to oil.

What Does "Pinaud" Mean?

It's actually the last name of the guy who started the company in 1810. Now you know!

Clubman is a really fascinating company, and we're big fans of their beard oil (and what is perhaps their best-known product, which is their aftershave). We think this is a solid choice as an every-day beard oil. Not too fancy—so if you’re looking for an oil for a big night out of a special event, maybe you want to go with something a little more top-shelf—but a great option in a great, clean, memorable-yet-familiar scent.

There you have it. Good luck, have fun, and happy beard!

Argan Oil: Everything You’d Ever Want to Know About Argania Spinosa, and Then Some

Our Ranger Grooming Company Beard Oil Review (and Their Other Products, As Well)