Before we jump into our Zeus Beard Oil review, we should note: when it comes to beards, it's hard to outdo Zeus.

When you think of historical figures with beards, you think of Abraham Lincoln, maybe Ernest Hemingway, and... Zeus!

And—really, having a beard amounts to half of what most people know about Zeus. He had a beard and he was into lightning. Can you name another thing about Zeus, off the top of your head? We can’t.

This is all to say, we love the name "Zeus" for a line of beard products. In another life, the writers of Rough and Tumble Gentleman were marketing executives, and we’re obsessed with the marketing aspect of male grooming products. We should probably focus less on marketing when we do our products reviews, but—hey, we gotta be us.

So how does Zeus Beard Oil stand up? Is it worth it? Here's our opinion. There are some things we like and some things we think are mildly disappointing (but overall, we give it a big ol' thumbs up).

We'll start with the most important aspect of a beard oil: the formulation.

It's Chock Full of Fantastic Ingredients

We'll start with the ingredient list, because that's the most important feature of beard oils—it's really whole gig, when you think about it. Like most beard oils, it's only got a few components, and they are:

> Argan Seed Oil. Argan is a heavy hitter when it comes to beard oils, because it serves multiple functions. It's great for facial hair—the molecules of argan oil are actually smaller than many other oils, which allows them to penetrate hair cuticles and condition/fortify them—but it's also great for skin, because it moisturizes and seals in hydration. You'll actually find argan seed oil in a lot of well-made beard oils, because it's a two-for-one ingredient, and it helps your beard hair AS WELL AS the skin beneath it (and people tend to forget how important that is!).

> Safflower Seed Oil. Safflower is a little more rare in beard oils—not many seem to use it—but it's great for skin, and it can help create an environment where whiskers grow, because it penetrates and nourishes the hair follicles that support your beard. It won't help you grow a beard—your genetics and hormones determine that—but if you can already grow a beard, it can create conditions on your skin that promote growth and fullness. And, just for clarification, it's SAFflower seed oil, and not SUNflower seed oil—that's different, and it's not included here.

> Grapeseed Oil. Grapeseed is included primarily for your actual whiskers (although it, too, can help skin). It's high in Omega-6 fatty acids and antioxidants, and provides a lot of the same benefits that you’d get from a regular “for-your-heard” shampoo/conditioner: it seals in moisture, keeps hair hydrated and strong, it adds a shine that can make hair look healthy and lustrous, AND it can maintain natural curls (which is pretty common feature in beards). Another heavy hitter. Lastly, it's got...

> Vitamin E. All of these ingredients are great, but the real standout may be Vitamin E. Vitamin E has a crazy-long list of benefits (and even benefits beyond hair and skin care), and it's included in a LOT of beard oil formulations. Not only does it strengthen and fortify hair, it also has some healing properties, and can even provide cellular restoration for everything from sun damage to scars. Vitamin E is another ingredient that punches above its weight, so to speak, and it's fantastic to see it here.

So... that's a lot of nice stuff right there! It's one of the reasons—in addition to the scent palate offered, and more on that in a sec—we'd put this in the "deluxe" category of beard oils. It's got a lot of really fantastic ingredients. The one thing it does NOT include is jojoba oil, and that's kind of a bummer—jojoba is another two-in-one ingredient—but given all the rest of the ingredients, that's fine. 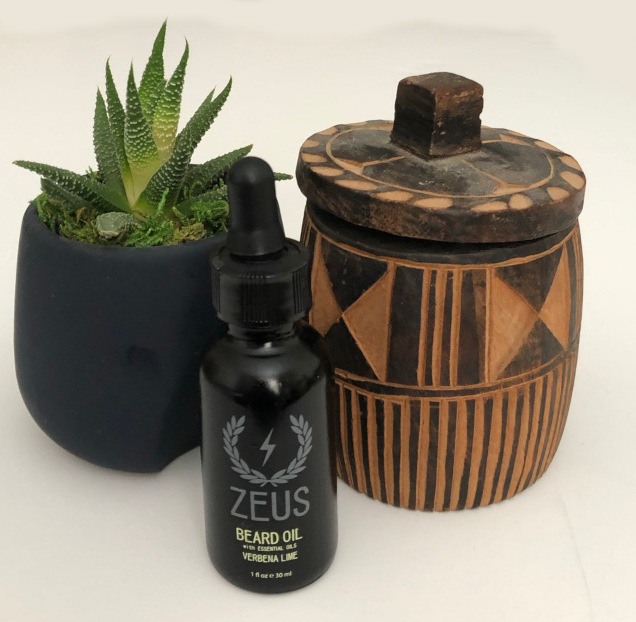 It’s Made in a LOT of Scent Options

We'll start here: there's something for just about everybody. You've got:

> Verbena Lime: Soft and lively, and not overpowering, but with plenty of citrus;

> Sandalwood: Clean and warm, and comforting—but without feeling "sleepy";

> Vanilla Rum: Pleasant and sweet, but without making you smell like a bakery;

> Spiced Maple: Sweet and mildly spicy (but NOT woodsy, as the name might imply);

> Woodsy: Woodsy, as the name directly implies, but also a little perky and citrus-y;

> Tea Tree: VERY perky—almost minty—and one of the stronger scents; and finally

> Italian Cypress: Probably the most complicated of the scents that Zeus offers, it's got a little of everything: mint, citrus, basil, and some woodsy notes. The Zeus Italian Cypress Beard Oil (affiliate link) is one of our favorites.

We've reviewed a loooooot of companies that make beard oil, and most don't offer such a wide range of aromas. That's fantastic, and if you find that you like one, you can test your way through all of them.

The strength of most of these scents (and we'll discuss the exceptions below) is that they're strong but not too strong. That can be tricky, because to make a scent "just right" you need to stabilize it with other scents—while not losing the original scent that you're trying to express. Zeus (in our humble opinion), has done just that, and the Verbena Lime is a great example of what we're talking about: you get that pleasant citrus-y green aroma, without feeling like you just bit into a lime peel.

The exceptions to that statement might be the Spiced Maple—that can be a little bit strong, and because it's not a common scent, it can be a little challenging for some people. It has its fans, but it's not one of the scents that everyone seems to love—and some folks don't like it. The other is the Tea Tree—we love it, but there are some folks who find it too "pushy." Minty / menthol-y smells can be like that.

One last thing as we're talking about scent: we have a minor—and by minor, we mean very minor—gripe with Zeus's scent line: there's no "signature" scent. These are all "classic" scents, but it would be great if Zeus came out with something unique. Other beard oils—like Honest Amish and Spartan's Den—have created complicated scents that are unique to their brand. Zeus is a great company, and we're sure they could create something really unique and enticing. Again, that's not a serious complaint—the scents offered are fantastic and cover everything we'd want to see—but it would be nice to have.

There's one scent we didn't mention, and that's "no scent." That’s actually a noteworthy thing to mention in a Zeus Beard Oil review, so…

Zeus Makes It in an Unscented Version

This is another strength. From a business standpoint, creating a zero-scent beard oil can feel like a gamble: People tend to want interesting products that are unique and enticing. Who would want something scentless and bland?

The answer is, a lot of people! Scented oils are wonderful, but if you've dressed yourself in a variety of scents—your deodorant, perhaps some aftershave, and maybe a cologne—you really don't need anything more (and in fact, that's probably way too much to begin with!). So having an unscented beard oil that can provide all the *original* benefits of a beard oil—that is, it can condition and moisturize beard hair and the skin beneath it—that's appealing to a looooot of dudes. So, thumbs up to Zeus for making an unscented version.

It's Viscous, Even for a Beard Oil

We're not sure if we would list this as a "pro" or a "con," because the consistency of oil tends to be a personal taste: some guys like a thicker oil, some like a thinner oil. Thicker oils tend to do a better job hydrating, but they take a while to work into a beard, and they get used up quicker.

So, while *we* like a thicker oil, you may not, but we would definitely categorize this as a "thicker" formulation (as most high-end oils are—the "mid-range" options tend to be a little thinner).

It's Cruelty-Free and That's Fantastic

Here's why "cruelty-free" is a good thing, and what it means: that the product itself was not tested on animals at any point in its creation.

For a very long time, cosmetics companies of all stripes would use the product on animals to see if the animal had a reaction to it, and while that doesn't sound so bad, the tests were often really cruel and basically amounted to torture. We won't get into the details—it can be really disturbing—but you can do some research from some reputable sources to see what we're talking about.

So that's the good news. Now for the bad news: "cruelty-free" doesn't really have any legal meaning. There is no legal definition for what "cruelty-free" or "not tested on animals" means, so there are plenty of ways that companies can actually still test their products on animals and still say their products are “cruelty-free.” We're not saying Zeus has done that—in fact, it seems like Zeus is leading the charge when it comes to marketing cruelty-free products when it comes to beard and facial hair needs—and we think that's great.

If you want to read more about cruelty-free products, you can do so here.

The Bottle is Handsome

We mentioned above that we’re obsessed with marketing, so allow us to opine for a moment:

The bottle on Zeus Beard Oil is really handsome. A lot of beard oils simply get a glass bottle and slap a sticker on it—and that's true for some beard oils we actually really like, like the Grave Before Shave oils—but Zeus went the extra mile and grafted their logo directly onto the bottle itself, along with a satisfying "brushed matte" surface. Take a closer look at the bottle—from an aesthetics + design standpoint, it's very well-conceived: 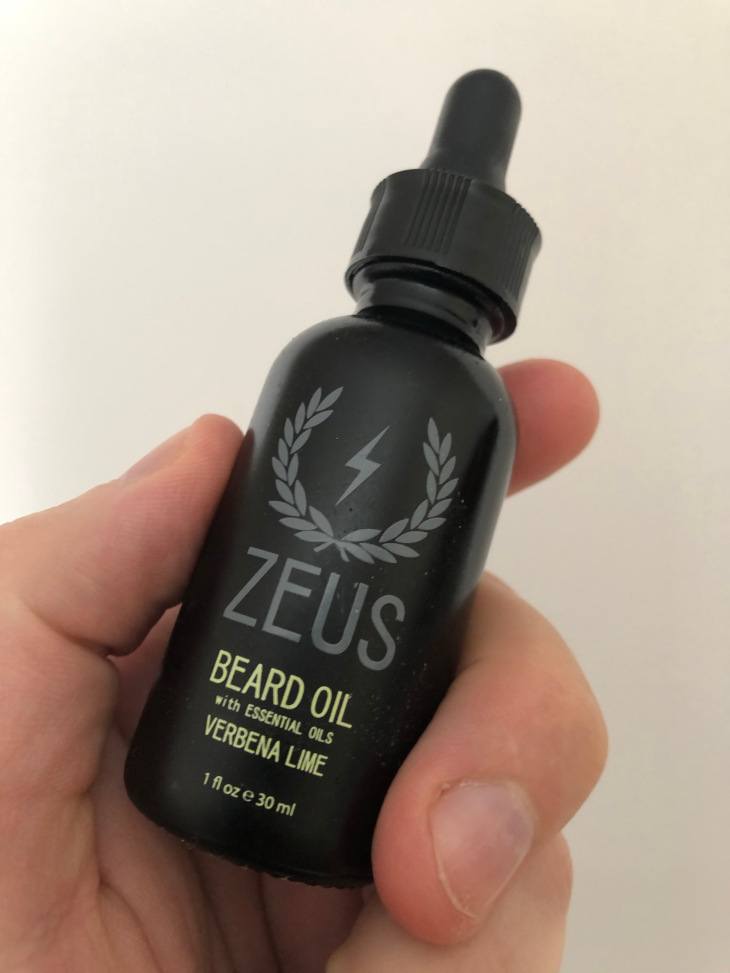 You may want to use it sparingly. It's a little more "deluxe" than other formulations, and Zeus, as a company, tends to be a little "fancier" than other brands. The bottle—like so many beard oils—comes in a single-ounce container, and that can make it run out pretty quick if you're not conserving it.

We tend to use oils like this as a sort of special treat—we have other more "ordinary" beard oils for everyday use, and we use the Zeus on special occasions of when we want to kick it up a notch.

Let's wrap this one up with two questions:

Is Zeus Beard Oil worth it?

We think so. It's a high-end beard oil made with a lot of great ingredients believed to fortify skin and hair, and it's got some great scents.

So, which one should I choose?

Alright, that's it for us. We hope something here helped you—there are a lot of beard oils out there, and choosing one can get a little overwhelming, but this is one of the options we happily recommend. Have fun, be good, and stay safe!