Hello there! Here we'll be looking one of our favorite beard oils: the Viking Revolution. We like a great deal (and have only a few critiques), and we'll go into details below, but for you bearded people in a rush, here's our...

A very solid option, made in some fantastic scents: sandalwood (of course), pine and cedar (a nice combo), and clary sage (great but not for everyone). It's got a relatively simple formula—argan oil and jojoba oil seem to be the base ingredients across most of their formulations—and that's pretty solid. There are plenty of beard oils that offer a wider range of ingredients, but those are the two we'd hope to see. The Viking Revolution logo and packaging are a little underwhelming, but the product itself feels great and the dropper is TOP-NOTCH (and leaky droppers are the absolute worst). A great offering, in our humble opinion, and definitely worth consideration.

We'll get to the most important critiques first, and then move on to the secondary/not-as-important ramblings. First up:

There are a lot of beard oil makers out there that offer a wider range of scents, but Viking focuses on the basics. Their "core" oils are definitely the ones you want to cover, and they include:

Sandalwood. This is, perhaps, the "classic" beard oil scent. It's something you'll find in shaving creams, beard balms, waxes, and so on. The Viking Revolution sandalwood is a calm, "clean" scent that doesn't feel too antiseptic. It's not a bold scent, and we don't really know too many people who dislike it—it's sort of a "neutral" scent. If you're wearing other scents, like a deodorant or a cologne, this can go well with it, because it's not too overwhelming.

Pine and Cedar. This is a personal favorite. It's fun and lively and it reminds me of... well, of being outside! It's a nice thing to wear if you're going to be indoors/outdoors during the day or night. If you're going on a hike or something it's probably not worth it, but otherwise it's a comfortable, familiar smell. Cedar is a calmer smell, and pine is a little more bracing, and these two complement each other well into a nice note.

Clary Sage. Some people love sage and some people hate it, and we usually urge people to smell some sage products before buying a beard oil with it. It's not overwhelming, but I find it a little more powerful that sandalwood, which tends to be nice and mild. It can have a nice woodsy feel to it, and Viking does a good job (in my most humble of opinions) in creating a balance with it.

Viking manufactures all of these in a Viking Beard Oil Variety Pack, but you can mix and match as well.

If we had to choose a stand-out, it would be the Pine and Cedar. Most beard oil makers offer a few different "tree scents," but they all seem to go about it differently. Some make a pine and a cedar separately, some focus on tea tree (which is much more minty), and some go for eucalyptus. Merging pine and cedar is a really good idea, and it has that sort of lively, outdoor feel to it. It's refreshing and lively without being overwhelming.

Update: Viking also makes a Bay Rum scent, but we haven't tried that, so you're on your own with that one.

Next up in our Viking Revolution Beard Oil review:

The Feel: Slick and Not Sticky (Which is Just Right)

Some "lower-tier" oils tend to get globby, and it can 1) be difficult to work into your beard, and 2) stay on your fingers and palms afterwards. That's not the worst thing if you're in front of your mirror at home, but it's a pain if you're out and about. The Viking beard oils tend to apply smoothly, which is wonderful.

That formula works because of...

The Ingredients: Very Good (But Not Great)

The main ingredients are argan oil and jojoba oil. Those are two heavy-hitters in the beard oil world, and you'll see them in most formulas, because...

Argan oil provides a lot of benefits to your skin. It moisturizes, provides some protection from the sun, and has some skin-healing properties. We often focus on our whiskers and forget the skin underneath, so that's a really nice touch. Argan oil can also give whiskers some volume and luster, and

Jojoba oil can act as a moisturizer, and make your whiskers a little fuller and less tangled.  Jojoba has a wide range of uses, from hair to skin to nails, and it's something of a "multi-tasker." If you're only to have a few ingredients in a beard oil, those are two very strong candidates. There are plenty of beard oils that include other ingredients, and some of those ingredients can be very helpful—Vitamin E is a personal favorite—but those are the heavy-hitters we hope to see in a formula.

The Bottle and the Dropper

First, the bottle: it's a one-ouncer, as are most Viking beard oils, and as are most beard oils in general. That's... OK. Two ounces would be fantastic, especially if you use this stuff a lot—it can go quickly. Striking Viking (affiliate link) makes a good 2-ouncer that I like, so you may want to check that out if you're looking for more product.

Second, the dropper: this sounds like a secondary concern, but I find it to be hugely important, and the dropper on the Viking Revolution is FANTASTIC. Let me explain: 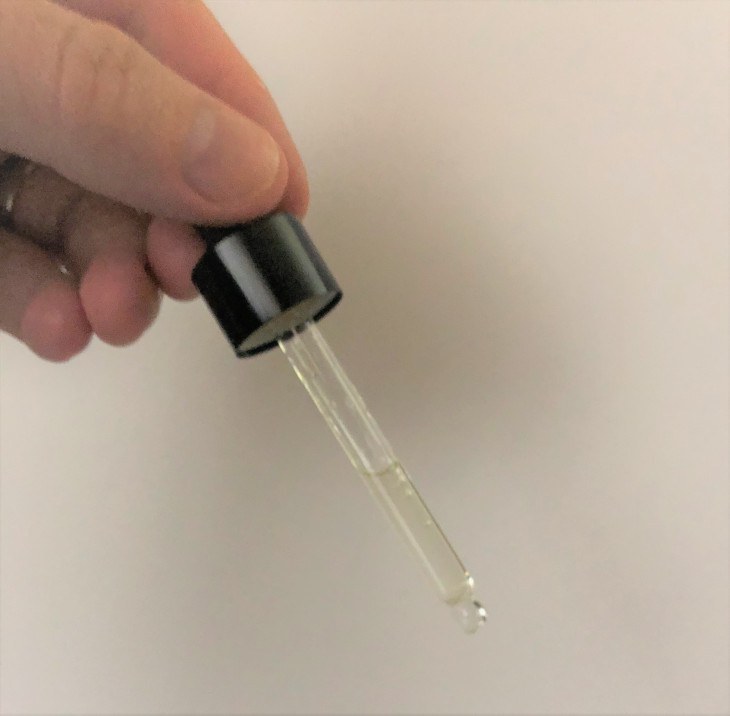 Some of the droppers you get with a beard oil are really frustrating. You squeeze the rubber bubble at the top, and try to vacuum up some oil, and it doesn't work—or even worse, it works, and then it dribbles out of the dropper before you can get it to your hands, and you've wasted some of it. That drives me absolutely nuts.

So I'm very happy to report that the Viking Revolution dropper both ably sucks up oil, and then keeps it inside the dropper until you release it. Aside from the actual product itself, that's one of the most important features of a beard oil, and Viking does a GREAT job with that. A+.

Alright, those are the "big questions" about Viking Beard Oil. All in all, I think it's a great option. Here are those secondary concerns/ramblings I mentioned earlier:

The Unscented Version is a GREAT Option, and...

...I wish more beard oils were manufactured in scent-free versions. In fact, I wish *all* shaving products were offered in unscented versions. Here's why:

Many of the scents that modern shaving products embrace—lemon, lime, vanilla, lavender, sandalwood—are great. They're pleasant, and they're not too strong. One of the (bonafide) complaints of "old school" shaving products is that they were waaaaaaaaaaaaaay too strong. And not only that, but men seemed to use waaaaaaaaaaaaaay too much of them. Maybe it was because people didn't shower as much as they do today, and in order to small—not offensive—you needed to rather slather the stuff on. I'm not sure that was; I wasn't around back then. All I can tell you is that some of the older gentleman I know, both in my family and at work, really go heavy on their scented goods.

Point is, today's products are much easier on the nose. But that's the problem, especially with something like a beard oil—the place where you apply it is literally right under your nose. That means that you're going to smelling it ALL day, or until it odors itself out.

Even for a scent that you actually like, that can be a little overwhelming. Constantly smelling something like that—literally right under your nose—can be a little but much.

Which is why an unscented version is such a great option. It gets the job done, and you never feel overpowered by the scent, AND it won't conflict with any other scent you actually do want to come across.

So, a big thumbs up to folks at Viking Revolution—I truly like that.

The Decor: Unimportant but Underwhelming

This, perhaps, is a personal shortcoming, but I love the marketing materials on beard care products. There's Honest Amish, with the guy smoking a corn-cob pipe, Grave Before Shave with the bearded skeletons, and Kentucky Beard Oil, that looks like moonshine—those are all fantastic images. They're things you'd put on a t-shirt and wear to the gym or something—great marketing.

The Viking decor is... a little meh, to be honest! It looks a little like a wooden plank, or something? Like a piece of wood that you just stained. And that's good and if you're into woodworking, that's fine, but I think that's a loss. They could have had a crazy-looking Viking with a huge beard at the helm of a ship stealing a yak or something, but instead it's just a plank of wood. It's a little meh.

This is a very, very small complaint—and again, I think the product is great, so underwhelming packaging isn't the end of the world—but I think they missed a great opportunity there.

There are so many fantastic shave products out there today, and so many of them have excellent names. "Viking Revolution" is a great one, because it evokes images of Vikings, and what did Vikings have? Horned hats and big beards. It's one of the first things you think of if somebody asks you about Vikings: the hats, the beards, and the plundering. Right off the bat, you know what you're in for.

Zeus Beard Oil is another great example. What's Zeus all about? Throwing lightning bolts and growing beards. That's it. Try to name another thing about Zeus—you got nothing! It's a great, and very evocative, name for any kind of beard product (and by the way, we're big fans of Zeus Beard Oil, and we'll discuss that in a minute).

So, B+ on the name. A good start—"Viking" definitely says "beard"—but a little confusing otherwise.

We mentioned this a minute ago: Zeus Beard Oil is also great. It's a more "higher-end" open when compared to Viking, and it's made in a very wide range of scents—specifically, verbena lime, sandalwood, vanilla rum, spiced maple (YES), tee tree, woodsy, Italian cypress, and unscented (nice). That's a very wide offering, and that's not always the case with beard oils.

It's also made with some really fantastic ingredients: safflower seed oil (to soften whiskers and keep skin from itching), argan seed oil (to give whiskers luster and volume), grapeseed oil (to fortify the skin), and Vitamin E, which has a lot of great skincare properties. That's a lot of nice stuff.

None of this "Viking Revolution vs Zeus Beard Oil" talk is a knock against Viking—Viking is great, and their sandalwood option is just as good as Zeus's sandalwood option—but if you want to branch out into new scents, Zeus is a great option.

Wrapping Up the Viking

There you have it! We hope that helps. We think Viking is a very solid beard oil, and certainly for its range. There are more high-end options out there, but we think Viking is a great option. Thanks for reading—be well, have fun, and smell good!