Behold, the Silly Mustache Guard: What It Is, What It Does, and Why It’s Actually Pretty Useful 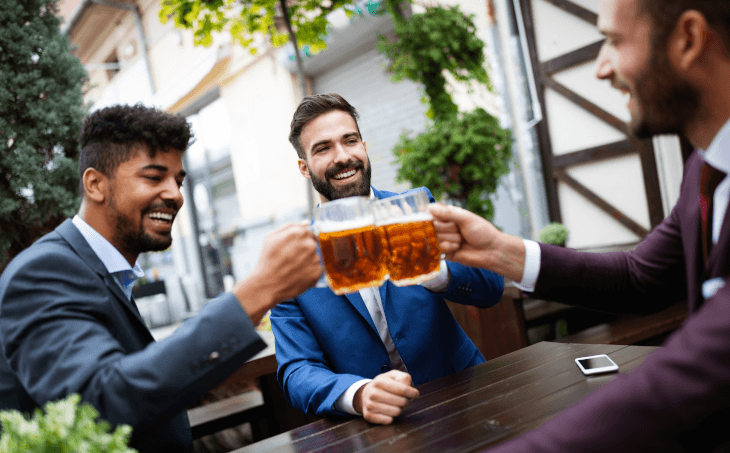 Here at Rough and Tumble Gentleman, it's our job to shine a light on every aspect of masculinity, and while it's an odd task, we take it very seriously.

So here we'll look at a fascinating curio of bygone masculinity: the mustache guard.

Quirky, ostentatious, and surprisingly utile, these were once wildly popular (while at the same time silly) and seem to be making an overdue comeback (while still remaining fairly silly—although perhaps more useful than they get credit for).

We'll give a little bit of history, discuss our picks for best mustache guard, and mention some dude named Poirot a couple times, but for now we'll start at the start:

What is a Mustache Guard?

Mustache guards, aka mustache protectors, are designed to defend the shape and consistency of your mustache. As far as our research goes—and we should mention, there's really not that much research out there when it comes to mustache guards—there are two main types:

1) Cloth pouches that go over your amazing mustache when you're sleeping or out in windy/dusty/sandy conditions. These were much more common in "Super-Big Mustache" eras of bygone days, when people didn’t shower as much, and needed to keep their looks for as long as possible; and

2) Small items placed over mugs and glassware to protect mustaches from liquids. Such items are either part of the cup itself, or an independent piece to be placed on top of a cup upon use. These were/are more common, and you may see some floating around today (and we've reviewed some of our favorites below).

Here's the thing about both types of mustache guards: they're both pretty antiquated, which is why you don't know what a mustache guard is in the first place. Few people really use them anymore, because mustaches are no longer en vogue, and they haven't been for a while. In fact, there were only two great "mustache heydays" in the history of upper-lip facial hair, and that would be America in the 1970s—think Magnum PI, Cheech and Chong, and Billy D. Williams (Lando Calrissian)—and Victorian England.

There are other eras where mustaches may have cropped up, but those are the big two, and if you don't believe us about the popularity of mustaches in English history, check out this oddly star-studded trailer for the film Murder on the Orient Express:

Every man in that movie has a mustache, and when we get to the hero—Hercule Poirot—he's got the biggest mustache of all, to let you know that he's the man in charge.

(And, yes: that trailer may not primary source—it's a movie made in the 21st Century about people with mustaches who murder people—but it's got Kenneth Branagh in it, so we assume the filmmakers did their homework.)

So everyone in the movie has a mustache, and that's because mustaches were incredibly popular, and they were incredibly popular among wealthy people. Mustaches represented a sort of fussiness that only wealthy people could have and maintain, because everybody else was working away in the mines and the factories, and the daily grooming needed to maintain a well-shaped mustache was simply not in the cards for those folks.

But here's the part where mustache guards become so important: one of the primary social niceties of those wealthy people—and in England, that social nicety would be drinking tea—could wreak havoc on a mustache (and not only that, tea in your mustache could drip all over your starched suit and ruin it). So some sort of mustache-protection device could prove very useful.

Noting the need, a brilliant man—an English potter named Harvey Adams—invented the mustache guard in 1830. It fit inside the rim of a teacup, so that an English gentleman could drink tea with dignity and not make a mess of himself. The design caught on, too, and in the years between 1850 and 1900, dozens of different manufacturers claimed different patents, and companies like Royal Crown Derby (still around), Royal Bayreuth (still around), Limoges (still around), made a lot of money from making mustache guard equipment.

So this all to say, mustache guards were a big thing.

But... they're ridiculous for present times, right? It would be silly to reintroduce such an absurd tool nowadays?

Mustache Guards are Both Absolutely Ridiculous and a Great Idea

For starters, they're really vain. By needing a mustache guard, you're implicitly choosing form over function—you're insisting on keeping a look you like, even though that look interferes with you literally consuming the food and drink that keeps you alive. So right off the bat, even the best mustache guards are a little silly.

But try to walk a mile in the shoes of someone with a mustache—or, even more conceivably, a beard, because there are a LOT of people with beards, and beards usually encapsulate a mustache—because here's the truth of it: unless you trim your mustache every single day, that fella gets bushy, and he gets into everything.

Ever see a guy with a big bushy beard and a mustache take a slug off a beer in a pint glass? He comes away with half his slug in his beard. Now imagine you're him, and every. single. time. you take a slug off your beer, you draw out an ounce of beer in your mustache. That's annoying, and kind of gross, because that beer dries eventually and smells like the floor of a frat house. THEN consider that if your beard and mustache has a mind of its own and you need to put a little wax in it to tamp it down, and all that beer mixes with that wax and drips into your mouth, and you'll get an idea of what a drag it can be to eat or drink with a mustache.

All of a sudden it's not so strange that a person would want to remedy that situation, and now you may see the appeal of a mustache guard.

So, there you have it: the reason for the reoccurrence of this odd and dated historical item. They seem ridiculous and vaguely haughty, but if you’re 1) a guy with a mustache and/or beard, and 2) you drink things from glasses or mugs, they actually make a lot of sense. So…

Let's get down to brass tacks: if you've gotten this far, you're probably at least a little bit interested in incorporating one of these puppies into your life, so here's our take on the best mustache guards you can use to protect your ‘stache. The first is a favorite of ours:

Bucardo, as far as we know, is nobody in particular, and in fact, a "bucardo" is actually another term for an Iberian ibex. We know that because "Wikipedia." Here's what an ibex looks like: 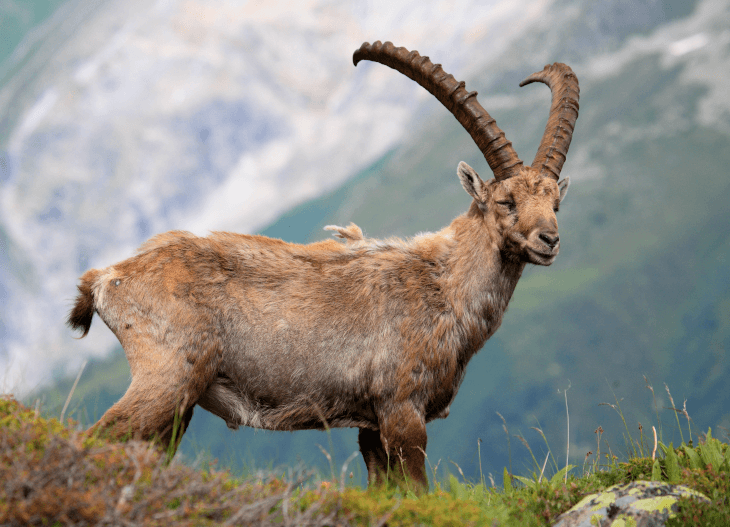 But here, in the Bucardo Cowboy Mustache Mug, "Bucardo" is a grizzled man with an almost impossibly long mustache who lives on a coffee mug, who allows birds to live on his facial hair, but does not seem charmed by them. Perhaps he is named after the proud Iberian ibex, perhaps not. Either way, we like this mug a lot, because it mixes a sort of "rugged caballero" look with the delicate sensibility of a ceramic mug, and that's not easy task.

The mug is also available in black and white, for those you who do not like color. It is here, the Black and White Bucardo Cowboy Mustache Mug, but in this monochrome mug, Bucardo has gussied himself up, gotten rid of the birds, and bought a fancy stopwatch. Way to move up in the world, Bucaro!

The great thing about the Whisker Dam is not its rugged looks, but its transportability: you can slap it down on many different types of beverage holders, from beer pints to tumblers to ice tea glasses. No longer are you constrained to a single type of beverage, as you would be with a coffee mug + mustache guard contraption. Find something you want to drink, slap the Whisker Dam on it, and boom! start drinking (provided it fits, and it doesn't fit on everything, as you might imagine).

You might ask, "Well why do I need a guard? Why can't they make a pint glass with a guard built onto it?" and while that may seem like a reasonable question, a beer purist will scoff if ask him or her (and we know this, because we asked Ted, our beer purist friend-type person, and he scoffed at us). The reason they don't put mustache guards on pint glasses, according to Ted, is because it would mess with the pour—it would make it harder to get the beer into the pint glass, and it would produce a lot of foam.

So there you have it. Plus it comes with a pouch! Nice.

While The MoGuard is very similar to the Whisker Dam, it is manufactured with the colors of the flag, and thus more outward with its patriotism (note: there are solid-color versions made, as well). It's also made of silicon, which is nice, because it can be a little more flexible on mugs/cups/glasses where it doesn't exactly fit. There will be some glasses that simply won't accept it, but what can you do. It's dishwasher-safe, which is a VERY nice touch for those of us who hate doing dishes, and we assume that’s absolutely everybody.

If you are put off by the more "weathered," crude aspects of the Bucardo and the Whisker Dam, and you're looking for something more refined, we might suggest the The LipMaster Moustache Cup. It is, undoubtedly, the most genteel of the mustache guard products we've reviewed here, and the subtle curve of ceramic, lined with gold(colored) material at the rim and base, make this a more elegant option. Refined and stylish—but not dainty or ostentatious. If your personal philosophy of mustache-having is more aligned with above-referred Poirot than the above-referred Bucardo, then we would recommend... the LipMaster Moustache Cup.

The only thing that might give you pause about the LipMaster is that space through which you drink your coffee or tea is a little slim, so you may need to drink at a more leisurely pace—but we imagine a Poirot man appreciates the value of unhasty imbibement.

There are some other mustache guard items out there, but those are the ones we like the best. Feel free to search for others if those don't do it for you.

That About Wraps It Up; Now You Know a Thing or Two About Mustache Guards...

That's all we've got for now—good luck, be well, and guard your mustache!

The Weird and Wonderful Benefits of Having a Mustache

The Best Mustache Scissors for Trimming and Detail Work