Are you a guy? Do you have a beard? Are you willing to wear a product with a name that's purpozefully mizzpelled? If so, you're in the right place.

Here, we'll provide our Beard Guyz Beard Balm Review, and we'll ask the important questions: Did the Beard Guyz do a good job with their beard balm? What makes it unique among other beard balms? And who are these beard guyz? We looked on their "About" page, and it didn't quite tell us. The guyz at Beard Guyz want us to protect their privacy and remain anonymouz, and we're fine with that.

So, anyway, here we go. We joke a little, but we actually like this product a lot—although have a few reservations—but we'll get into all that below (affiliate link in image):

We've used dozens of beard balms and reviewed many of them, so—as silly as it may sound—we've developed a short list of ingredients we hope to see in a beard balm.

Beard Guyz have included a number of these ingredients, including...

Jojoba Oil: great for skin, and can help balance oil in pores;

Shea butter: chock full of vitamins, and includes fats that are great for hydration beard hair; and finally

That's a nice mix of nice items, all included to seal in moisture and keep your beard hydrated and healthy-looking, and to keep your skin nourished and pliable. That's really all a beard balm is supposed to do, and everything else is extra, and that's a powerful list of ingredients.

The one way that Beard Guyz stands out is that it seems to make beards softer than a lot of other balms do. Other balms seem to focus on hydration, or skin care, but we found that this did a great job on making beard hair soft. If you've got an especially rough or crunkly beard, it may be a good option.

Keep in mind, this is not an all-natural formulation—and we'll talk about that later—but it includes a lot of great stuff.

It Doesn't Offer a Ton of Hold, and That's Disappointing, But Only Mildly So

We're actually a little surprised by this, because on the ingredient list, beeswax is the second ingredient, but that was our experience—it didn’t provide too much hold. It does provide a lot of *heft*—it provided a lot of body, and made things look healthy—but it didn't really hold anything in place.

That may make sense, though—beard balms aren't really *supposed* to be styling agents, and the only ones that do offer some hold either have many different types of waxes (Smooth Viking has three different types of waxes, and it's pretty decent) or it has a lot of syntenic ingredients to provide hold (and that's the case with Clubman Pinaud)—it's got a lot of chemicals in it, but it can make your beard crispy and crunchy and keep it in place). Beard Guyz Beard Balm has a bunch of natural ingredients, and only one type of wax, so it makes sense it's not great for sculpting (in our humble experience, of course).

Again, it provides plenty of body and can make beards look healthy and full, but it doesn't do much for shaping. If you really want to shape your beard, we'd suggest an actual beard wax (like Ladies Man Beard Wax, which we like a lot).

Honestly, we don't know! Emblazoned right on the top of the tin, on the left-hand side, it says "WITH GROTEIN (TM)." You can see it here, on the left side of the tin: 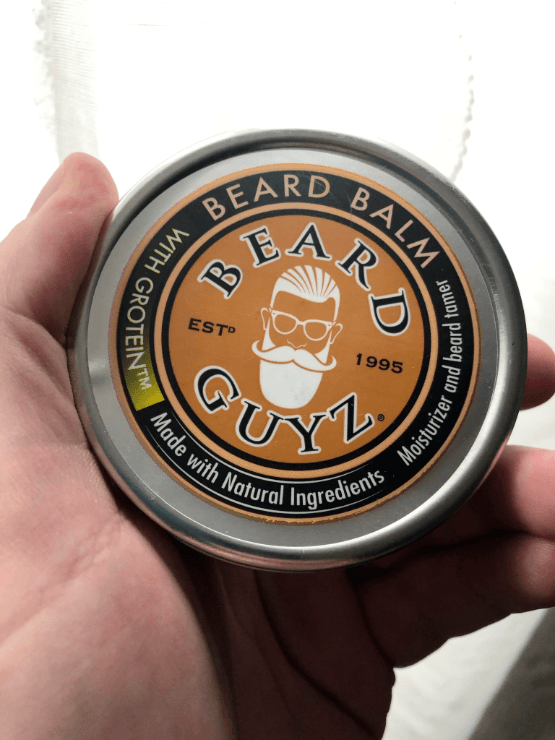 But... what is that? It didn't say on the package, and it didn't say on the Beard Guyz website, so we don't know. It sounds like a portmanteau of "growth" and "protein," so maybe it's a protein included to enhance beard growth? Who knows.

We're generally suspicious of any product that claims it can promote beard growth—most products that promote beard growth don't actually make your beard grow; instead, they encourage a healthy environment on your skin, so that your whiskers can grow, IF you're already capable of growing them—and when we use this, we didn't see any particular increase in whiskers or whisker volume, so the meaning of "Grotein," along with the identities of the Beard Guyz themselvez, remains a mystery.

This is a good segue, however, to something absolutely knowable: it's weight.

...and while that may not sound like the biggest deal in the world, it's something we actually appreciate. Most beard balms themselves are put in two-ounce tins (and even one-ounce tins, if you buy four-packs, like the balms from Viking Revolution and from Rocky Mountain Barber Company), and... we find that lacking! If you've got a big beard, you can go through two ounces of beard balm in just a few weeks.

Ideally—ideally—we'd see beard balms packaged in 5-ounce tins, because it seems like we're almost constantly needing to buy more of the stuff (so, Beard Guyz, whoever you are, if you're listening...). We'd love to see larger tins, but in the meantime, we'll take every size increase we can get, and we appreciate the 2.25-ounce tin and the 3-ounce tin.

It Contains Sorbitan Oleate, and That's Good, or Bad, Because...

...it helps the beard balm keep its consistency. Sorbitol Oleate is a chemical compound that acts as an emulsifier, meaning that it's included in the ingredient list to keep the product from separating into oils and waxes.

That's actually a big problem with beard products—and most cosmetics, and a lot of foods—because products without an emulsifier tend to fall apart, or congeal, or clump up, or just generally look bad, in their packaging. There are actually beard balms that have that issue, and Honest Amish is actually one example. It's got an all-natural ingredient list—and therefore no chemical emulsifiers—and it can separate in the tin into oils and wax, instead of a nice, even balm. It doesn't happen often, but it can be a real pain.

So we like that Beard Guyz include that agent, and it can make the balm a great option if you live in a very warm clime. If you find that beard balms end up becoming wet oily messes, you may have better luck with this one. No promises, obviously—your experience may vary—but Beard Guyz Beard Balm is made with ingredients that help it maintain its consistency, and that's not the case with a lot other beard balms.

One last thing: the inclusion of that emulsifying ingredient keeps it from being an all-natural product—so if you're looking for all-natural, you may want to check out another balm, like Honest Amish or Rocky Mountain Barber Company.

absolutely hate it. And that's kind of what happens when you create a signature scent.

A "signature scent" is one that a beard balm company creates for its balm and its balm alone—it owns the scent, and no other companies are allowed to make balms with that scent. When you make a unique scent, some people think it's wonderful, and other people think, “What's wrong with those people who think it's wonderful?” Probably the best-known example of this is Honest Amish and their clove/anise scent. It's absolutely unique—making it hard to describe—and we absolutely love it, but it has its fair share of people who think it smells loathsome.

From a business standpoint, it's kind of a gamble for a beard balm company—or any company that makes a product with fragrance—to make a signature scent. It's not like a universally-recognized scent, like mint, or lemon, or something like that—those are natural, single-tone scents, and it seems like most people like them. They're a fairly safe bet, and it takes a little bravado to make a scent that people may not like.

So, 1) We think it's fantastic that Beard Guyz made a signature scent, and 2) we feel the need to inform our readers that not everyone likes it. We don't usually publish notes like that for single-tone scents, because it seems like most people like them, but it seems like the most "controversial" scents—that is, complicated signature scents—are the ones that people either love or hate.

So there you go. You may like the scent, you may not. How's that for informative? 😉

As we near the end of our Beard Guyz Beard Balm review, you may be asking…

By and large, yes! We actually lent our tin around to a few friends and see what they thought, and we got ten likes and two dislikes.

When we asked what people liked, here were a few replies:

> "Smells earthy and kind of woodsy"

The two "dislikes" described the scent as:

> "something like a spice you'd use in food" and

> "having a very faint curry smell."

Again, scent is an entirely subjective experience, and we can't tell you if you'll like it or not.

You may have noticed that the Beard Guyz make more than one balm. There's the one we've been discussing, which is for "regular" beards, and there's Beard Guyz Beard Balm 25, and that's a little bit different. It's made specifically for guys with normal-to-fine facial hair, and it's got 25 conditioning agents (butters, oils, and extracts) to imbue moisture and hydration into your beard hairs. This isn't a full "Beard Balm 25 Review" and we apologize about that, but it's got a lot of the same ingredients as the normal beard balm, along with a few more.

This is One of the More Unique Beard Balmz We've Seen

If you're looking for something a little more unique, you may want to try this one. It's got a signature scent that's really fascinating, it's got some great skin-care and hair-care ingredients, and perhaps more than other balms we've used, it softens very well. A good option, in our summation.

Alright, guyz! We hope that helps. Be good, have fun, and enjoy your beard!