Honest Amish Beard Balm Before and After Photos

Honest Amish is one of the most popular beard companies out there, and they imbue each of their products with their signature scent—a mix of clove, cedar, and anise, that's sweet (but not too sweet) and pleasant (but not overpowering). It's the go-to balm for a lot of bearded gentleman, but for whatever reason, there aren't really many images online of how it looks in an actual beard. That's weird, but that's where we come in.

Here, we'll use our favorite beard model and you give you a few Honest Amish Beard Balm before and after photos. We'll then take a really close look at the photos and describe what Honest Amish Beard Balm does very well, what it has trouble doing, and what other products you may be interested in. Your results may be different, but here’s what we got. Let's jump in:

So here's Honest Amish Beard Balm in the tin:

It's nice and soft and pliable, and you can see the fingerprint where we scooped a dollop out.

Now let's take a look at this beard *before* Honest Amish Beard Balm. Here it is: 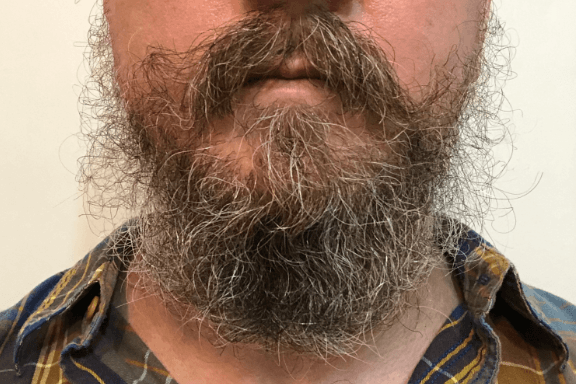 This is a nine-month-old beard, maybe a little bit older, and it's a mess, but it's nice and bushy.

It could use a trim—we'll talk about that below—but it's got some nice body, and it elongates his face a little bit and makes his chin look more prominent, which is one of the real jobs of a beard—to make the jawline look more masculine.

He's got a full mustache, some good growth underneath his chin, some whiskers at the soul patch, and some growth at the sideburns.

So, those are the positives.

Can you tell all the things that are going wrong here?

Take another look if you need to—really zone in and pick things apart:

Here are a few of the issues—and you could probably find more:

> There are lots of loose fly-aways at his sideburns. There's some decent growth there, but mostly it's just straggly whiskers pointing out everywhere;

> The hair at the soul patch points every which way. Ideally, it would be brought together and point downward;

> The mustache curls way too far over the lip, and that's not a great look—at least, not most of the time—and it probably makes it hard to eat, with a lot of food getting stuck in all that hair;

> There are some white beard hairs there, but that's not a problem at all—in fact, almost all the time, white beard hair looks really manly and attractive, so that’s fine;

> The whole thing needs a trim—it just looks sloppy. It has that just-rolled-out-of-bed look, or that "I've-been-working-in-a-dusty-warehouse" look, followed by a "then-I-went-into-a-windstorm" look. Not great.

More than any single product, this beard just needs some attention and some grooming. Beard balm may be able to help, but what would really help would be trimming all those fly-aways around the perimeter of the beard.

But that's not what you came for—you want to see Honest Amish Beard Balm before and after photos. So let's balm this guy up and see what happens.

The results aren't amazing—again, this handsome beard needs some grooming more than anything else—but there are a LOT of positive changes! 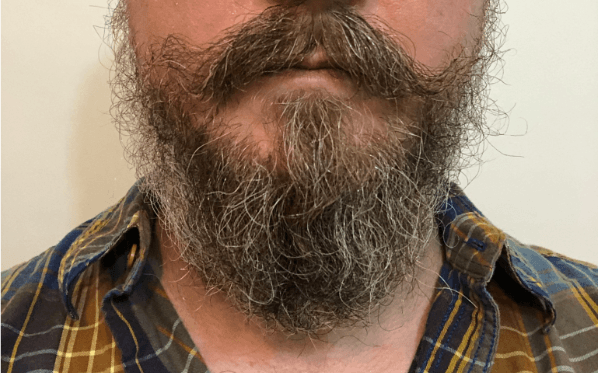 Again, the beard isn't perfect and it still needs some work, but there are a lot of good things happening here:

> The balm has tamped down those flyaways a bit. They're a lot closer to the face than they were, and they don't form as wide a perimeter around the face as they had. We can actually do a lot better with those fly-aways with some beard wax, and we'll talk about that in a moment;

> The hair and the soul patch are gathered nicely and pointing downward. It's not perfect, and it could be a little bit tighter, but it's a looooot better. That, too, could use some wax, and we'll get there in a minute, as well;

> The mustache is in a better spot, and the balm has given it a bit more shape. It still hangs over the lip a little bit, but it's "tightened," and it doesn't look like it's traveling in every direction;

> The ends of the mustache are a little more gathered, too. They're still not perfect—if you look at the left side of the mustache (your left / his right), you can see that it frays a little bit, and there's room for improvement there;

> The beard itself—all of it—looks a little bit more lustrous—it doesn't look as dry as it did in the first photo; and finally

> If you look at the entire beard as a whole, it points in a downward direction, and if you compare it to the "before Honest Amish" picture, it got a much nicer triangular shape.

All in all—a huge improvement! Not perfect, but much, much better—the beard balm has done a very good job of "organizing" the beard and giving it some shape. The balm—in this case, Honest Amish Beard Balm—has added a lot.

But—and we mentioned this earlier—it could still use some work (aside from a good trimming and some general grooming). The one thing it could really use is beard wax. MOST of the beard is fine, but there are still some flyaways at the sideburns, and the soul patch could be a little tighter, so let's see what wax can do.

Here we'll be using Honest Amish Beard Wax. Here's what it looks like in the tin: 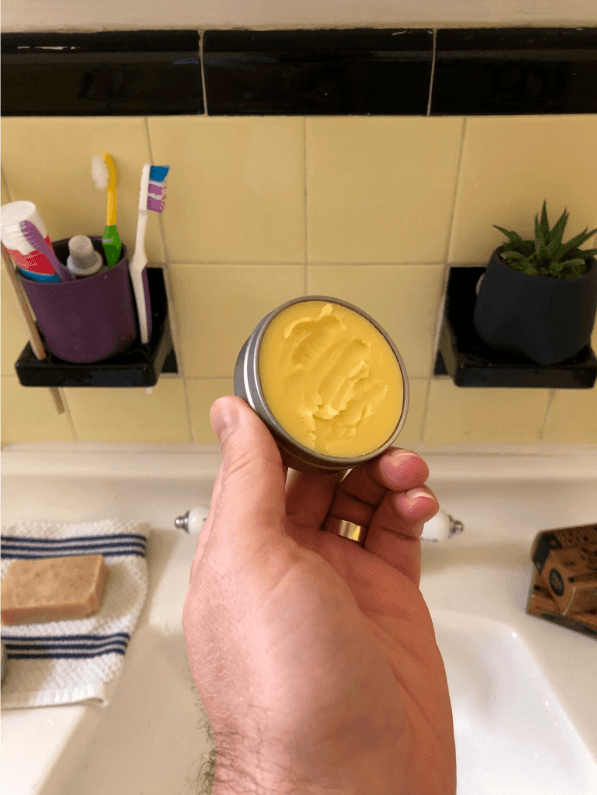 If you're unfamiliar with beard wax, it's literally a wax, and that means it's really stiff. You can't just scoop it out—if you try and scoop it out of the tin like you did your beard balm, you'll find very quickly that it ain't going nowhere.

It's not as hard as a candle, but it's getting there, and you'll need something to scrape it out with. A lot of guys use a guitar pick or something like it (and waxes often come with a scraper you can use), but your fingernails can do the trick if you don't have anything.

It really is stiff—take another look at that photo, and you'll see that it's not like balm, which you can scoop out—you really have to chip it out.

After you've got some on your fingers, and you've rubbed your fingers together to warm it up, you can apply it—and here's what this guy's beard looks like with beard wax at the sideburns and on the soul patch: 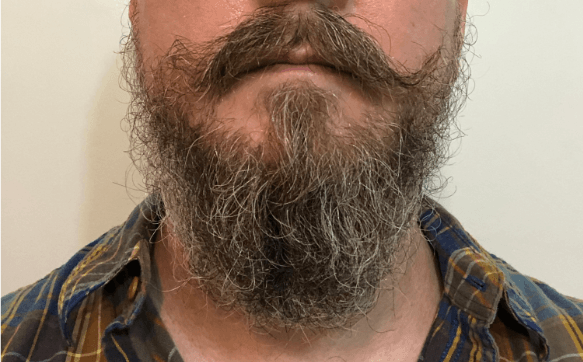 As you can see, the wispy whiskers beneath the sideburns are in much better shape. They're not perfect, but they look a *lot* better, and they actually resemble a beard, instead of a bird's nest.

The soul patch, too, is in better shape—it points directly downward in a sharp "V" and it actually has a little shine to it, which is always a nice plus.

Again, what really needs to happen here is some good-old-fashioned beard grooming—this fella needs to trim some of those fly-aways at his sideburns and underneath his chin, and things would look a whole lot better immediately—but the beard balm and the beard wax really did a lot to get this beard in line.

What Honest Amish Did Well and Didn't Do Well

Alright! So let's break this down. Here's what Honest Amish Beard Balm did well:

> It gave the beard some structure—it gathered all those errant beard hairs, and gave them some shape;

> It gave the beard a little bit of luster—it looks flat in the first photo, and the balm made it look shinier and healthier;

> It moisturized the beard very well. This doesn't really come across in the photos, but the beard balm hydrated the beard hair very nicely—and that's really the true purpose of a beard balm, is to hydrate skin and hair.

Altogether, there are a lot of positives. Your results may be different, but we were able to get the changes above.

Here's what it needed a little help with:

> For those beard hairs that were truly wild, the balm wasn't really up to the task to keeping them down, and we needed to bring in the big guns—the beard wax—to tone them down a little. It should be noted, though, that no beard balm out there—at least that we've used—would have been able to keep those beard hairs down, and you’d need a wax to do so;

> It wasn't able to get gather the beard into a sharp point at the bottom—more wax (or better grooming!) would be necessary for that.

We've written about a lot of beard balms, and we've written our Honest Amish Beard Balm review here). We think this is a great option—not only does it smell sweet and enticing (and totally unique from just about every other balm out there)—but it does a very good job of hydrating a beard and giving it some shape. It may need a little help if you've got some serious fly-aways (which the fella above most definitely does) and you can use a wax for that, but in our opinion, Honest Amish Beard Balm is still the reigning champ overall when it comes to beard balms. Two thumbs up.