Beard butters are kind of a "niche" product—most guys seem to use beard oil or beard balm, but butters get overlooked. That's a shame, because they're one of the best ways to moisturize a dry and tangled beard. They're usually chock full of ingredients that adhere to a beard—and the skin beneath it—and permeate it with hydration.

So here we'll look at Every Man Jack Beard Butter. It's a unique product, and they've made some interesting decisions putting it together—specifically, using hemp as a hydrating agent. Is it any good? Is the use of hump kitschy or actually helpful? And is there a real Jack behind Every Man Jack? (as far as we can tell—no).

All this and more, but if you're in a hurry, here's a quick rundown:

We consider this a solid option, and one of our overall favorite beard butters. Every Man Jack makes the butter in three unique formulations, including Hemp with Clary Sage and Bergamot (that is, hemp + an herb + a citrus scent), sea salt and citron (another citrus scent, that’s somewhere between a lemon and a lime), and sandalwood + vanilla, which is a neat spin on the classic sandalwood scent. All that is nice, but the real benefit is the hydration potential of the ingredients: the formulations contain a lot of butters and moisturizers, that can hydrate a beard and relieve some of the itch on your skin (and the hemp formulation may be your best bet for that). The scents are unique and they may not be for everyone, and the tub is kind of an odd shape that's tough to throw in a backpack or a satchel, but overall, it's a solid pick for a beard butter.

Alright, we've got pros and cons, so let's start with the plusses before we head to the minuses:

Beard butter really only needs to do two things: hydrate your beard and skin, and smell nice (or not smell at all, if you're looking for an unscented option). Jack delivers on both of those points, so let's start with:

For whatever reason, most companies that make beard butter create very unique scents. They aren't really that many single-scent options when it comes to beard butters, and companies tend to get very creative when making them. Maestro is a good example—Maestro's Beard Butter is a mix of grapefruit, pepper, and a citrus named bergamot, and it's a really distinct fragrance.

Every Man Jack does the same, and it makes three different varieties of beard balm:

Hemp with Clary Sage and Bergamot. This is perhaps their standout variety, and we don't really know of any other beard butters that feature a hemp scent. It's not what you'd imagine when you think of a hemp scent, and it's paired with clary sage, which has an earthy, "herb-y" scent, and bergamot, which we just mentioned—that has a citrus-y scent, which is sweet but also a little tart. Altogether, the fragrance is kind of surprising—it's clean and light and soft and it kind of smells like... outside, maybe? Not necessarily a forest, but open air. It's pleasant.

Sandalwood, Vanilla, and Cocoa Butter. Sandalwood is that classic essence that most people associate with barbershops, but the sandalwood in the Every Man Jack Cocoa Butter is kind of a spin on that classic scent (and we talk more about that below). There's a reason it's so widely used in men's grooming/shaving products—it's sweet, low-key, and calm, and very comforting.

Sea Mineral & Citron. This is another unique one—sea salt and citron. Sea salt—we don't really know what sea salt smells like, or that it has a smell at all, but the citron exists somewhere between a lemon and a lime, with kind of an herbal feel. It's much harder to describe—there's a little hint of citrus, with... salt? We've failed you here, and we're sorry. It's hard to describe, but it, too, is enticing. Kind of a like a lemon meets the sea, in a way.

As far as beard butters go, that's a good selection. For whatever reason, beard companies don't make many scents for their beard butters (if they make beard butters at all—many don't). So having options—especially ones that they put so much thought into—is great.

So we think the three varieties of Every Man Jack smell nice. The real task of a beard butter, though, is to moisturize—to take that dry beard and hydrate it—and in our experience, EMJ does a great job of that, due to its ingredient list. We looked up the formulation on the Every Man Jack site, and here are the main ingredients for each (we couldn't find the ingredient list for the Sea Salt).

There were a bunch of other ingredients included, but those are the real movers and shakers.

A beard butter needs to have—you guessed it—one or more butters, and shea butter is a pretty common one, because it does a great job of moisturizing skin and hair. Same for coconut oil—very common, because of its hydration properties. What stands out, though, is the cocoa butter, which can protect hair and relieve some flakiness on skin (and that may help if you've got beardruff), and the wheat protein, which can also provide hydration and moisturization.

This also contains shea butter, coconut oil, and cocoa butter, but it also includes soy protein, which is a skin and hair conditioning agent (meaning, it can provide your beard with a bit of body and shine), and hemp seed oil, which has been shown to ameliorate skin itchiness. That's the real draw here—it's designed to relieve some of that scratchy, irritating feeling of a beard, which is very common for new beards (and old beards, too!) Hemp is so often thrown around as an "edgy" ingredient, but it actually has a great purpose for being here.

So, lots to like. What's nice, too, is that the feeling of the butter is actually kind of cool, temperature-wise. Oils and balms can have a warm/hot feeling, but the feeling we got with EMJ beard butter was a cooling sensation—kind of like applying a cold cream.

We've talked a lot about ingredients in this post, but always remember: if you can't find a beard butter with ingredients you like, you can always "DIY" it and concoct your own formula.

We've looked at a lot of beard companies over the last few years, and it's sometimes entertaining to see how some companies just throw a product together and sell it. It's kind of surprising, actually—some companies are really pretty lazy.

Every Man Jack isn't that way—in fact, they seem pretty motivated, and they seem to operate with a clear set of goals and ethics—buuuuuuut their beard butter isn't perfect.

The Butter's Not Great for Totin' Around

There are some beard products that are good for throwing in a backpack or even a pocket and carrying around, and there are some that aren't. Beard balms tend to be easy to tote around—the usually come in round, thin containers, and they're easy to transport. Here's a bunch of different beard balms all in thin, flat containers: 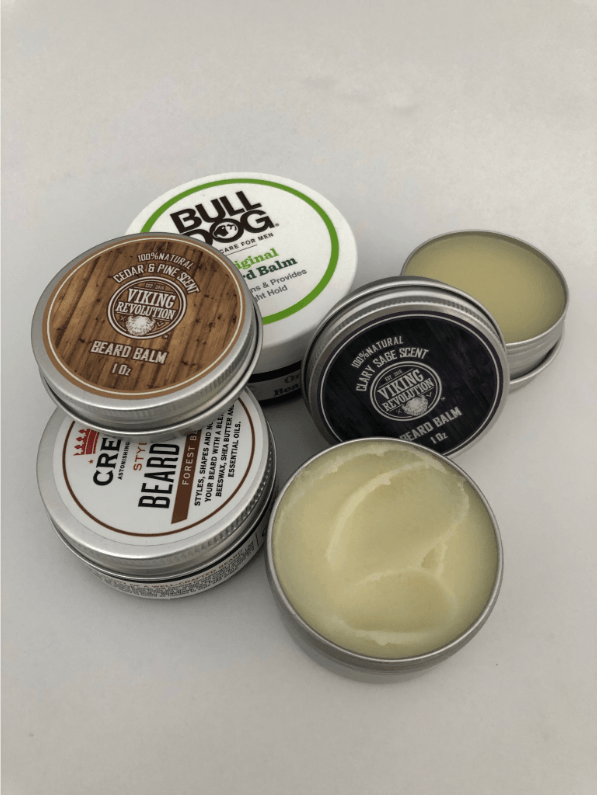 That sort of thing slides easily into a backpack, messenger bag, or whatever you got.

Beard butters are usually difficult to tote around, and Every Man Jack is no exception. It comes in a taller tub, and that can take up a lot of room if you need to store it. See here: 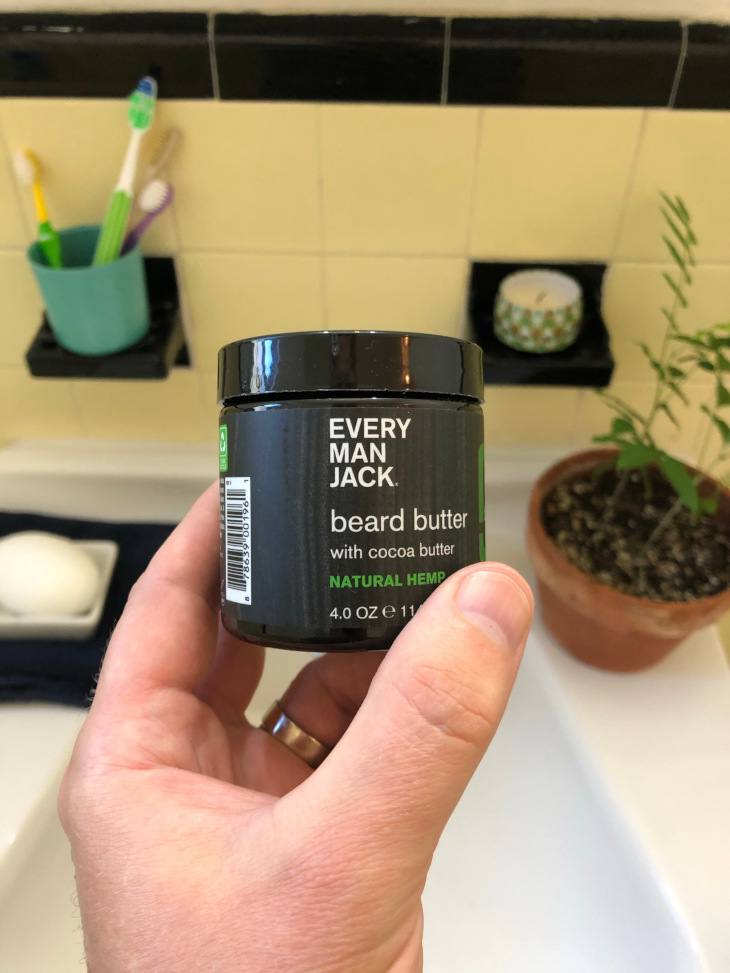 If you like to get all your beard grooming done before you head out for the day/night, it's not a big deal, but if you like to reapply butter during the day, this can be a hassle, because it can be hard to store while you're out. Not the worst thing in the world, but worth mentioning.

The Scents Are Unique—And That's Not a Bad Thing, But...

They're signature scents, meaning that they're not single scents like mint, lime, or something like that. A lot of guys like that simplicity, and these scents are a combination of different scents. Even the sandalwood scent, which is a classic, single scent, is a variation on the original scent. It's not the normal sandalwood that you'd get from a beard oil or a shaving cream—it's more of a variation on that scent.

So, while the scents are very good—or, at least, we like them—they're not knowable before you get them, and signature scents aren't universally loved. The great majority of guys know and like mint, lemon, etc., but it's not a sure thing that the majority of guys like, for example, clary sage and bergamot.

Again, that uniqueness is also a strength—it's kind of neat that EMJ went out on a limb and made something new—but in doing so, EMJ will surely find some people who want something simple and known.

Those are minor gripes, for sure, but worth mentioning, and… that about wraps up our Every Man Jack Beard Butter review!

Anything Else for Jack?

Nope! There you have it. Nothing too complicated—a unique, solid option. The scents are one-of-a-kind, and the ingredients are fantastic. The fragrances may turn some people off, but that's true of every signature scent, and it can be a bit of pain to lug around because the container tub is so tall. Overall, though, we think EMJ is a good option if you're looking for a beard butter, and we're particularly partial to the hemp formulation.

Alright, we hope that helps! Be good, have fun, and happy beard!