Beard Balm: Before and After Pics

Beard balm is one of those weird products where you never really quite know how well it's going to work. Will it provide body? Will it hold your beard in place? Will it make it look as though you're actually taking care of your beard, even if you're not?

These are all great questions, so here we'll dive in and take a look at two "beard balm before and after" case studies.

In the first one, we have a fella with a loooooooooooong beard, and in the second one, we have the same fella with a medium-length beard. We'll go over the “before and after” shots in great detail, and pick apart all the things the balm was able—or not able!—to do.

How Beard Balm Looks in a Long Beard

OK, here's the before photo of a long beard: 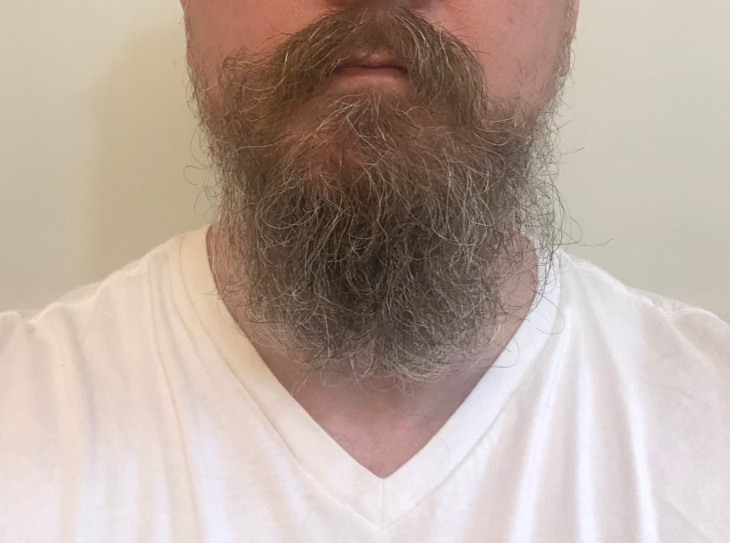 This is about eight or nine months growth, and if we had to define it, we'd put it in the "beer-drinking / motorcycle gang / living-outdoors" category. Some guys love this sort of unkempt look (and if you're mildly horrified at the idea of wearing your beard like this, sit tight—we'll look at a better-kept beard later).

So. This beard obviously needs some trimming and shaping, but there are some good things happening here. The beard has:

> A nice full mustache, that could be shaped into a handlebar mustache, if this guy so desired;

> A lot of body beneath the chin—it's pretty dense, and while there are some wispy bits, they're probably manageable; and

> A well-executed trim beneath the temples—the whiskers by the ears are nice and short and well-kept beneath his ears, making this guy's face seem long and narrow.

> More than anything, this beard needs a good trim. It needs to be shaped on the bottom and at the sides. As it is now, it looks a little crazy and unkempt. That's fine for the biker gang, but in most other areas of life, this sort of "I'm neglecting myself" beard won't fly;

> The wings of the mustache are a little uneven, and you can see the right wing droops a little lower than the left wing. Sometimes you can fix that, but sometimes you can't—so we'll see what the beard balm can do; and finally

> The soul patch area is a little disorganized. It's splayed outward, and you can see a little bit of his skin peeking through the whiskers. It's a good look when the whiskers at the soup patch are gathered and pointing downward.

OK! So now that we know what we're looking at, let's take a look at what beard balm can do. Here we'll use one of our favorite products—Honest Amish Beard Balm (affiliate link). 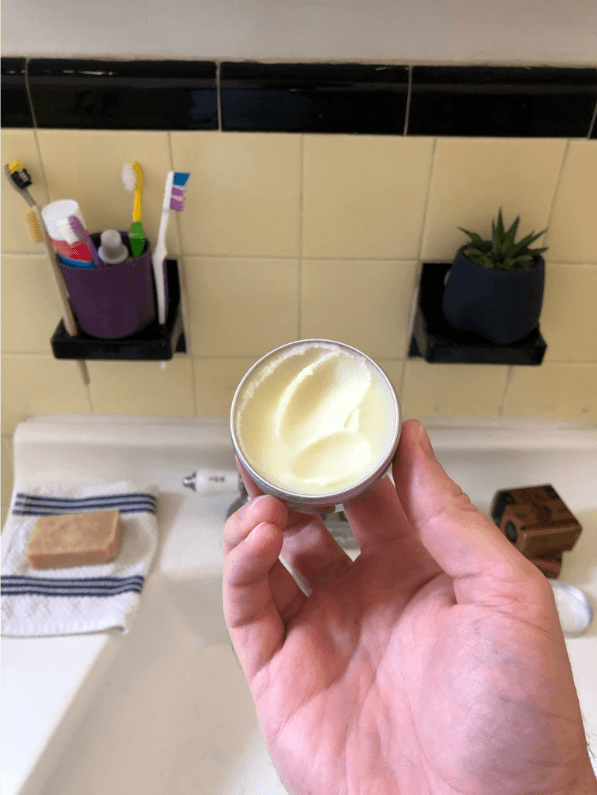 And here's what it looks like when applied to the beard: 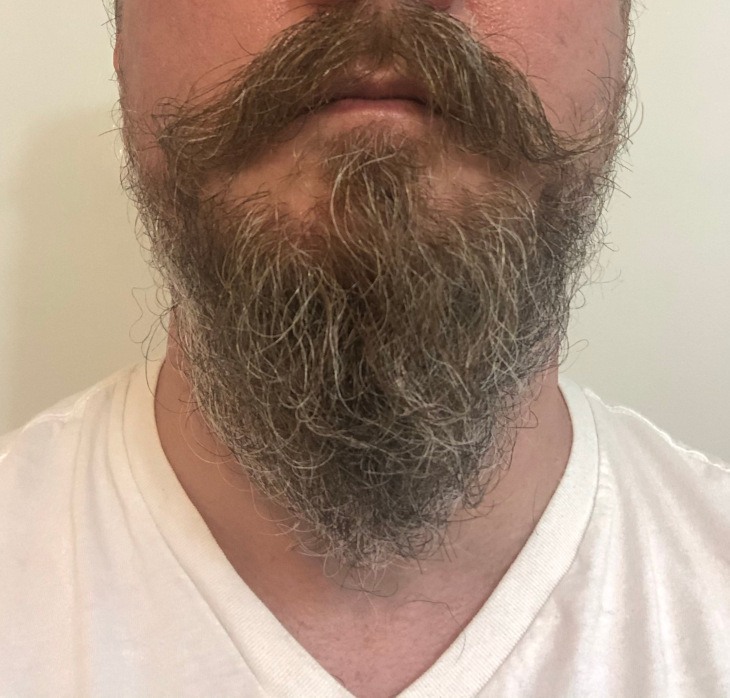 First of all—and we need to state this up front—this beard needs some trimming and shaping. The beard balm obviously did some incredible things here, but more than anything, a trip to a good beard barber would help this guy more than anything.

That said, there is some incredible improvement here! Take a close look, and you'll notice that:

> The wings of the mustache are much more symmetrical. They're not perfect—and this guy might want to use some beard wax, which provides more hold than a beard balm, because it's got a higher wax content than a balm;

> The bottom of the beard shows tremendous improvement, and while it's not perfect, you can see that it's got a nice downward-triangle shape. It's a little uneven, but again, that's a trimming problem, and not necessarily a beard problem; and lastly

> The soul patch is look great. It's not perfect either—in fact, it leans slightly to the side—but you can see the man's skin, and it, too, has a nice downward-triangle shape going on.

How Did the Balm Help the Longer Beard?

> It was able to form the beard and taper it downward. Whereas before the beard was a tangly mess, here it looks like it's got some actual shape;

> It provided a bit of hold. It's not a concrete, rock-hard hold—that's the sort of thing that only a beard balm can provide—but it's generally keeping the beard hair in place;

> It provided some body—even though the beard doesn't splay outward anymore, it looks fuller and healthier; and

> It's hydrating the skin. This is the benefit you can't see in photos, but the beard balm itself has made it to the skin, and is moisturizing the skin beneath the beard—which is actually one of the most important, and most overlooked, functions of a beard balm. After all, a "balm" is typically something primarily used to heal and nourish skin.

What Didn’t the Balm Do for the Longer Beard?

The beard balm didn't make it look as though you spent the morning trimming it. That's definitely worth noting. A beard balm isn't a replacement for beard care—you'll still need to actually put the work in.

Before we move on, here's an image of shots together:

Alright! Next up in our beard balm before and after comparisons:

How Beard Balm Looks in a Medium-Length Beard

If you're not into the Viking look and fancy something a bit more refined, here's the same fella with a tighter beard: 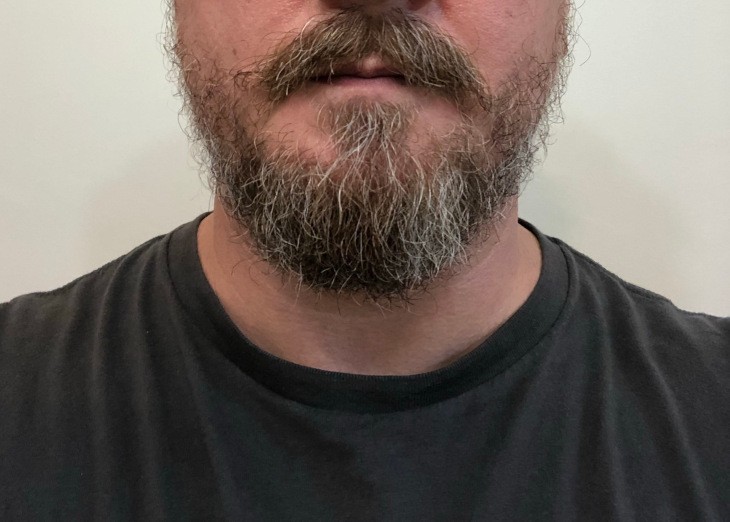 This is about four or five months growth, and it's the kind of beard you could bring to work and go out with. It's better-kept and a little more organized.

> Has a nice, rounded bottom. Right off the bat, that's a strength—it's well-shaped and makes the guy look like he has a bigger, broader jaw;

> Has a thick mustache that doesn't spill over the lip. It, too, needs a little shaping, but it looks manageable; and finally

> The soul patch is in pretty decent shape. It's not *perfect*—it's a little cluttered and disorganized—but it's good enough.

> The beard is a little bit "fluffy" at the sideburns, and it whisps out a little bit. It'll be interesting to see if the beard balm fixes that in any way;

> The mustache is a little uneven—on the left side, there are a few whiskers that clump together and lean outward; the whiskers on the right side look a little better-shaped; and finally

> The mustache itself hangs over the lip a little bit, and it'll be interesting to see if the balm can do anything about that.

Here we'll be using Grave Before Shave Beard Balm (affiliate link), which looks like this: 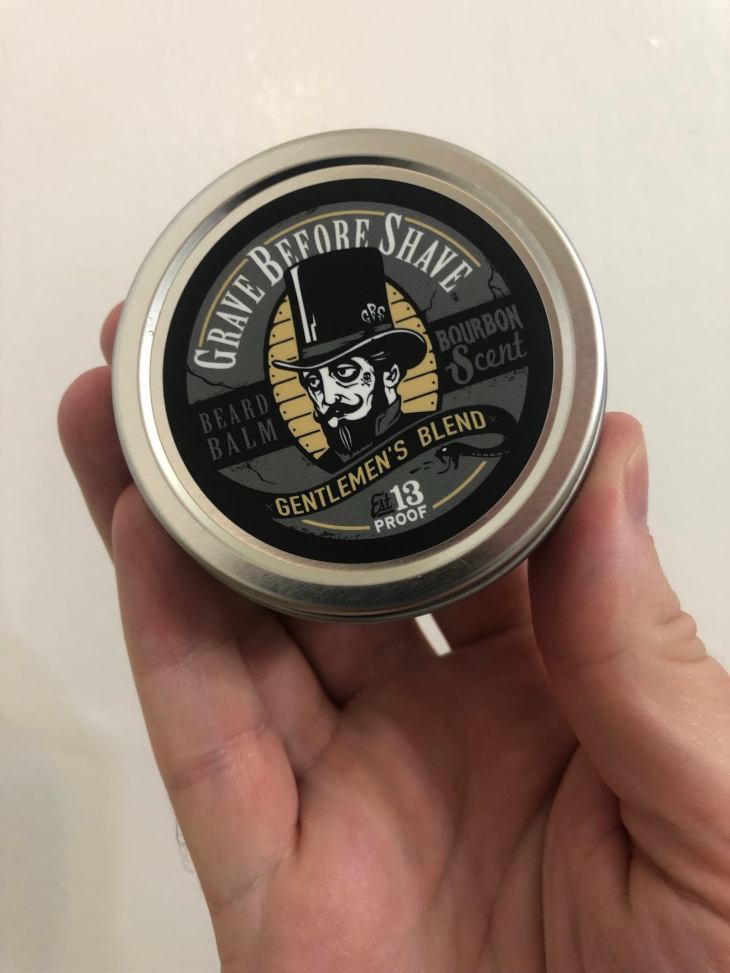 We won't use too much of it—just enough to put on the end of your index finger: 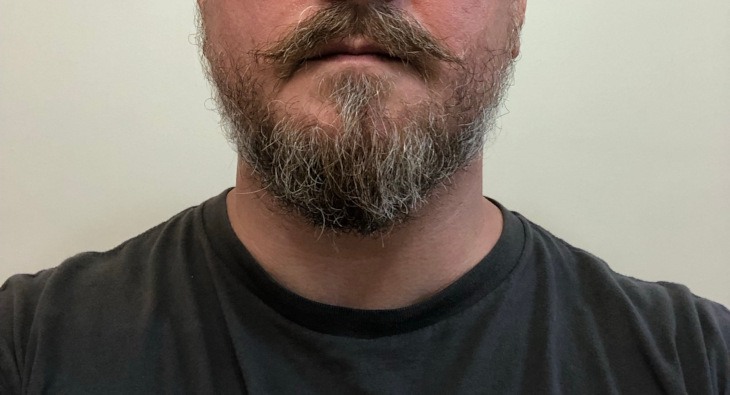 Alright—just as with the bushy beard, there are some great changes here! There are some things the balm *didn't* do, but let's look at the successes:

> The beard balm tamped down the fly-aways at the sideburns and under the ears, while still maintaining the "full" shape of the beard. That's perhaps the biggest "win" here—it gathered that facial hair closer to the face, while still making them look full;

> It tightened up the soul patch. It's downward-facing, which is great, and while it's not super-tight, it's a little tighter than it was before; and finally

There's a lot to like here. The results you'll get in a medium-length beard will be a little less dramatic—because, after all, there's less hair to move around—but you can still see the benefits.

What Did the Balm Do for a Medium-Length Beard?

> It's provided a little bit of body. The beard already had a nice shape, but it looks a little bit fuller, and not as dry;

> It got right onto the skin. Again, this is tough to show via image, but with short beards, it's very easy work beard balm onto the skin, where it can provide moisturization and nourishment.

What Didn’t the Balm Do for the Medium-Length Beard?

Despite the successes, there were two things it didn’t quite help with:

> The mustache is a little sloppy—it looks fine if you glance at it, but if you really look closely, there are a lot of stray hairs and lip-overhang issues that need to be addressed—and the beard balm doesn't really address that.

> There are also a few fly-aways at the bottom of the beard that didn't get swept into the beard. Those fly-aways aren't really that noticeable in a big, bushy beard, but they can really stand out in a closer-cropped beard. So that's something to keep in mind—a beard balm won't always capture all your fly-aways, and you'll need to clip those with a scissor or razor.

Before we move on, here's a side-by-side pic of the before and after shots:

As Always, Your Beard Will Have a Mind of Its Own

We hope this has helped, and with all the beard balm before and after photos above, you can see what a balm can do. It can’t totally transform your beard, but it can provide a lot of benefits, and in the case of longer beards, really change your look.

Keep in mind, though, that your mileage may vary—every guy's beard is different, and beard balm will bring out different aspects of your facial hair and look.

Alright, that's it from us—have fun, do good, and be safe!