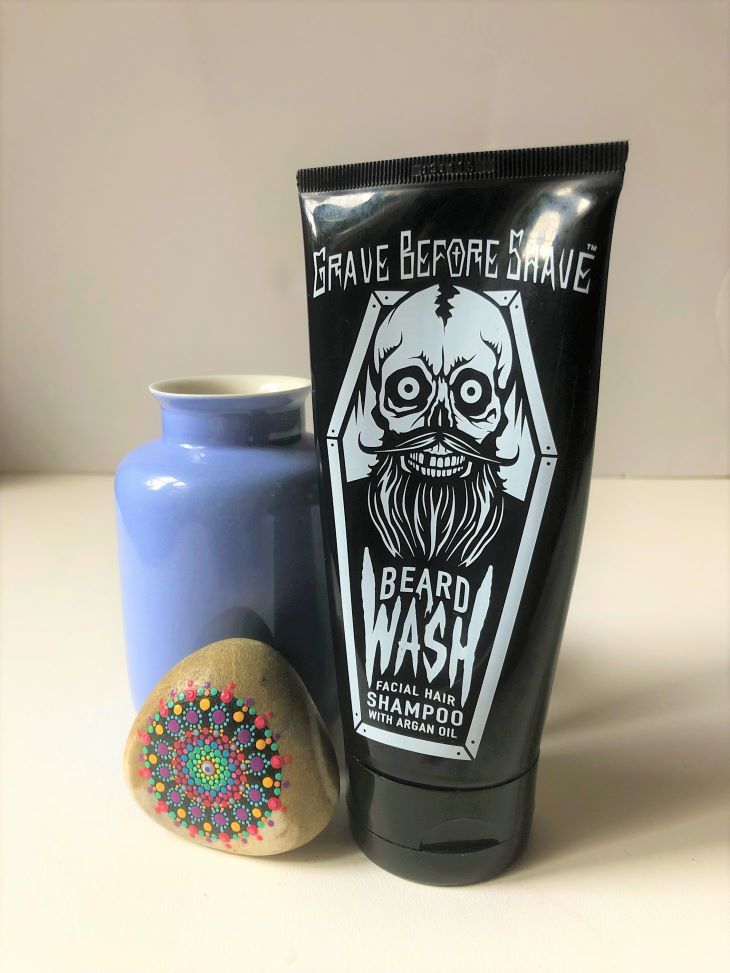 Grave Before Shave is probably best known for their scented products: they have a great range of beard oils and beard balms, all with fantastic artwork and creative names. Those are their "fun" products, and they're probably why GBS has gotten so big in the last few years.

They also make some "less-fun-but-just-as-important" products, though, and that includes their Grave Before Shave Beard Wash. Here, we'll take a look at what we like about it and what we find lacking, and provides some alternatives if you think it's not for you.

Thumbs up. Just a small amount the size of a peanut or almond springs into a sudsy cloud that's easy to work into the beard, and easy to wash out. The scent is invigorating—a little mint-y, maybe menthol-y, or like tea-tree—but it doesn't last too long, so you can use a beard oil or beard balm afterwards. We didn't really like the bottle too much, and it wasn't the best moisturizer, so if that's what you're after, you'll either need to use their conditioner, or a beard oil or beard balm after you're out of the shower. All in all, a solid option, in our most humble of opinions.

And now, for those of you who love getting into the details:

What We Liked About GBS Beard Wash...

...is most things, to be honest. Here are the features that stand out:

Your mileage may vary, of course, but we found that GBS made our beards fuller, bushier, and "springier." It was easier to work into the beard—in fact, once it was all sudsy, it actually made the beard feel smaller, and it was really easy to wash/exfoliate the skin beneath the beard—and it rinsed out pretty quickly, too.

Once out of the shower, it dried pretty quickly, and it didn't leave any itch on the skin. It didn't really moisturize very much—more on that later—but that's usually the case with a beard wash/beard shampoo that doesn't contain a conditioner.

As for cleansing properties, though—A+. We're outdoors a lot and attract a lot of dirt and grime over the course of a day, and as far as we could tell, everything came out, which is all you can ask for, really.

A Little Goes a Long Way

This is another nice surprise. It only took a peanut-sized dollop—or an almond-sized dollop, for those of you who may be allergic to peanut metaphors—in order to build up a nice cloudy bushel of suds. Just that little bit was enough to get all parts of the beard, from the chin, to the under-the-chin, to the mustache, to the sideburns.

You may call us cheapskates, and you're probably right, but it's really nice to see a product that will last a while. Coming from a 6-ounce squeezable bottle, that means it could last a few months, which is FANTASTIC. We got through beard oil every few weeks, so it's nice to actually have a beard product last for a little bit.

It Smelled Nice and It Wasn't Overpowering

It's always difficult to describe smell, especially when the fragrance is a mix of different things, but the scent on GBS Beard Wash... a little "energizing," like mint or menthol or tea tree. Some people describe it as "bright" or "bracing" or "green" (not in the "eco" sense—more like "minty"). It's not a calming scent, like sandalwood or lavender or anything like that—definitely something we equate with "perking up."

It's pleasant, in others words, and that's great, but the two other aspects of the scent are just as important:

It's not overwhelming. Some of those invigorating scents can be "too much," and that's a complaint we hear a lot when it comes to tea tree. People feel a little "punched" by it, and it comes across as too powerful. That wasn't our experience here—it was balanced and pleasant. So that's important, and...

So, all in all, very good! It cleaned the beard, suds-ed up nicely, and washed out easily. The scent was pleasant not overpowering. Thumbs up.

It wasn't perfect, though, and if we’re going to publish an honest-to-goodness Grave Before Shave Beard Wash review, we must mention:

What We Found Lacking in GBS Beard Wash...

Honestly, we were mostly pleased with the shampoo—it made the beard fluffy and clean.

If we did have some complaints, they would be...

As we said, GBS did a great job of cleansing the beard—there are a lot of odd bits of grody stuff that can get caught in a beard (food, skin flakes, etc.) and we came away with a super-clean beard. BUT! It didn't really do much to condition it or imbue it with hydration. In fact, it was a little bit dry after using it.

So, that would be our biggest complaint: it didn't really moisturize as well as we had hoped it would.

That said, we should mention that shampoos aren't really designed to moisturize—they really are all about cleaning the beard, so we can't fault it too much.

But, if you want to hydrate your beard—and you most likely should, as beards can get really dry—you may want to supplement it with a beard conditioner after you use the shampoo, or with a beard oil or beard balm when you’re out of the shower.

GBS probably created those two separate products purposefully—the good folks at the company are probably capable of making a shampoo + conditioner formulation, but they'd most likely rather sell their conditioner separately—and that is The Grave Before Shave Beard Conditioner (affiliate link). We've used that and we like it too, but not everybody wants to be in the shower that long, and that are some great beard two-in-one shampoo/conditioners out there. If that's what you're looking for—and shampoo/conditioner combos really do save you a lot of time!—we usually suggest Bulldog Beard Shampoo and Conditioner. It's a nice two-in-one tool that cleanses and hydrates.

Also keep in mind that you can also skip the conditioner altogether and use a beard oil or beard balm after you get out of the shower, as plenty of folks do.

The Tube is Bottom-Opening...

...and while that doesn't seem like a big issue, it's one of those small details that drive us nuts. It doesn't seem to leak out of the bottom after you close it, but when you open it, some can pop out and you end up wasting some of it. Or, because it's downward-facing, more comes out than wanted. That's a pain. See here:

It's not the biggest deal, but it would be great if Grave Before Shave made it in a top-opening bottle, or with a screw-on/screw-off cap or something.

As Far as Beard Products Go, It's Not the Most Natural Formulation

Shampoos and conditioners, by their design, are pretty complicated, and they require a different mix of agents—opacifiers, sequestering agents, detergents, preservatives, thickeners, and a few others—so it's difficult to make an all-natural beard shampoo.

If, however, you're looking for one, we usually suggest Professor Fuzzworthy's Beard Shampoo (affiliate link). It's plastic-free, sulfate-free, paraben-free, and it's made mostly from oils and thickeners. It's one of those beard washes you don't hear too much about, but a lot of people love it.

Not All Beard Washes Are Created Equal

You'd think it would be tough to mess up a beard wash, but believe it or not, there are some terrible options out there. Grave Beard Shave is one of the good ones—we think it’s a really solid product, and one we're happy to highlight. It's not perfect—and if you're looking for shampoo + conditioner combo, this ain't it—but overall, we're fans.

Alright—we hope that helps! Good luck, have fun, and be well!

How to Make Your Own DIY Beard Wash

Our DIY Beard Conditioner: How to Make a Conditioner with Your Own Signature Scent