Wahl has a surprising number of beard trimmers in their product line, and here we'll review the Wahl Beard and Stubble Trimmer. It's a solid little trimmer, and while it's not the most impressive model they've got, it can be a fantastic choice if you're looking for a couple of specific features.

So let's get right to it. Here are some thoughts, good and bad, about the Wahl Beard and Stubble Trimmer: 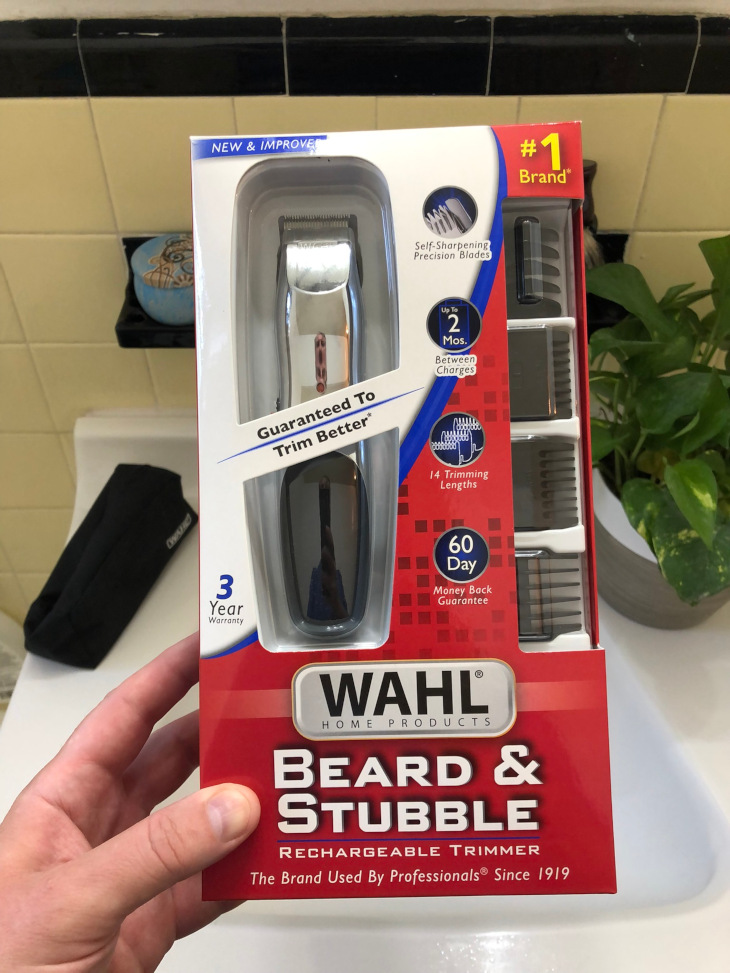 It's Nothing Too Fancy, and That's Really All You Need

We're about to share a secret about beard trimmers, so don't tell anybody: for the most part, they're all pretty similar. It's true—for this particular tool, the gap between "no frills" and "super deluxe" isn't that great. A good beard trimmer—and we consider the Wahl Beard and Stubble Trimmer to be a good one—is all you need to get a well-shaped trim.

And this is not to say that all grooming tools are like this—that's not the case at all. Electric shavers, for example, have a WIDE range of capabilities, and basic models may shave your face, but deluxe models will literally read your face to give you a close shave, self-wash the unit after you’re done, and then keep a charge for months. There's a WIDE range of features on electric shavers—but not much of a range with beard trimmers.

It's a very simple model, in other words, but that’s not a bad thing when it comes to beard trimmers. In fact, it can be a strength, because...

It's Great for Beginners Who Are New to Trimmers

Wahl makes a number of great trimmers, but some of them get a little complicated, and that's another great aspect about "just-the-basics" trimmers like this one—they're great for guys who are new to trimmers. It’s easy to assemble, easy to use, and it comes with enough trim guards so that you can experiment with a variety of looks (and we'll talk about trim guards and other tools in a moment).

There are a couple models out there that are difficult to learn on because they have so many features, and you end up spending a lot of time just learning how to work the features, instead of learning how to trim your beard. The Conair Super Stubble is like that—it's got a pivoting flex head, a flip-back guide comb, and a bunch of other things... and all that is GREAT, but it's got so much going on, that it takes a while to learn, and that can be frustrating for beginners.

This one, though, is right where we'd want it to be—simple, uncomplicated, and very easy to get the hang of.

It seems like most beard trimmers and electric shavers have self-sharpening blades these days, and that's FANTASTIC. Older models never had that, and they needed manual sharpening, and that was a huge pain (and a time-consuming pain, as well). Self-sharpening blades means you can pick up the trimmer and plug it in and use it without worrying about whether it's going to pull and tug at your whiskers—without cutting them.

It doesn't mean that the trimmer will last in perpetuity—wouldn't that be nice!—but it does mean that sharpening the blades is something you don't have worry about.

Comes with a Nice Suite of Trim Guards/Lengths

Altogether, the trimmer can provide you with 14 different cutting lengths, all the way from 1/16 of an inch to a half-inch, and that's pretty decent. It's got three different guards you can use for short and long stubble, and four different guards you can use for short to medium-length beards, and an adjustable guard that you set at different lengths (which is great if you only want one trim guard in your set—some guys get frustrated when they see a whole bunch of trim guards in their set, because it can be very easy to forget which one looks best on you, so they stick with that one adjustable guard and ditch the rest). So all those lengths make the tool good for everything from stubble to short beards to medium-length beards and goatees, and those are the looks that most of us are going for. That's great.

It's not really a great tool for longer beards, though. The set doesn't include any longer trim guards, and while you can free-hand it and use the trimmer without any the guards—you basically hover across your whiskers and the trimmer slices them off—that can be difficult to do, especially if you're new to having a beard. So while there are plenty of great trimmers made for cutting longer beards, we wouldn’t count this among them.

That's not a mark against it—it's built specifically as a "beard and stubble" trimmer, and with proper usage and care, it can do a great job on both. That's saying something, because it's nice to find a basic, "nuts-and-bolts" model (and this is a basic, "nuts-and-bolts" model) that can take care of both beards and stubble. There are plenty of trimmers that are designed specifically for stubble, so it's nice to have a "beard-AND-stubble" tool like this out there.

It's Got a Sleek, Handsome Look to It

This isn't the most important thing in the world, but look at this guy—pretty handsome! It's got a clean, slender design: 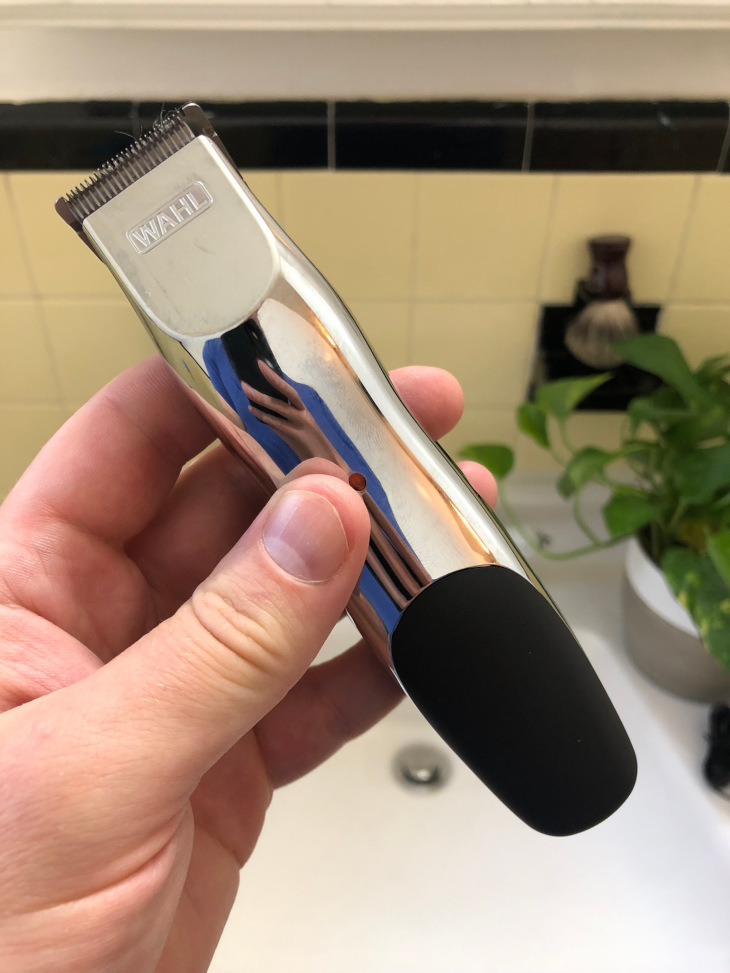 Beard trimmers (and hair clippers) tend to fall into two aesthetic categories: sleek and futuristic or old-school and blocky. The first you might see on spaceships, the second you'll see in barbershops (wait—barbershop of the future... barbershop spaceships? barberships??). Anyway.

While we absolutely recognize the important of function over form, we love good-looking grooming tools, and this gets high marks in the "appearance" scale. It's smooth, streamlined, and ergonomic—all the things we'd hope to see in a grooming device we want in our bathroom.

One quick note: when we say it's got a "clean design," we should note that "clean" has nothing to do with how it'll leave your bathroom sink. Like most other beard trimmers, it can make quite a mess—all those whiskers and clippings can get everywhere. If that drives you crazy, you can check out beard trimmers with a vacuum feature—they suck up a lot of your beard trimmings as you work, and you have a lot less to clean up when you're done.

The Pouch is OK But Could Be Better

This seems like an unimportant issue, but hang with us here for a second, because it can be important, depending on how you use your trimmer.

The pouch that comes with the trimmer is functional, but a little disappointing. It comes wrapped up, like this: 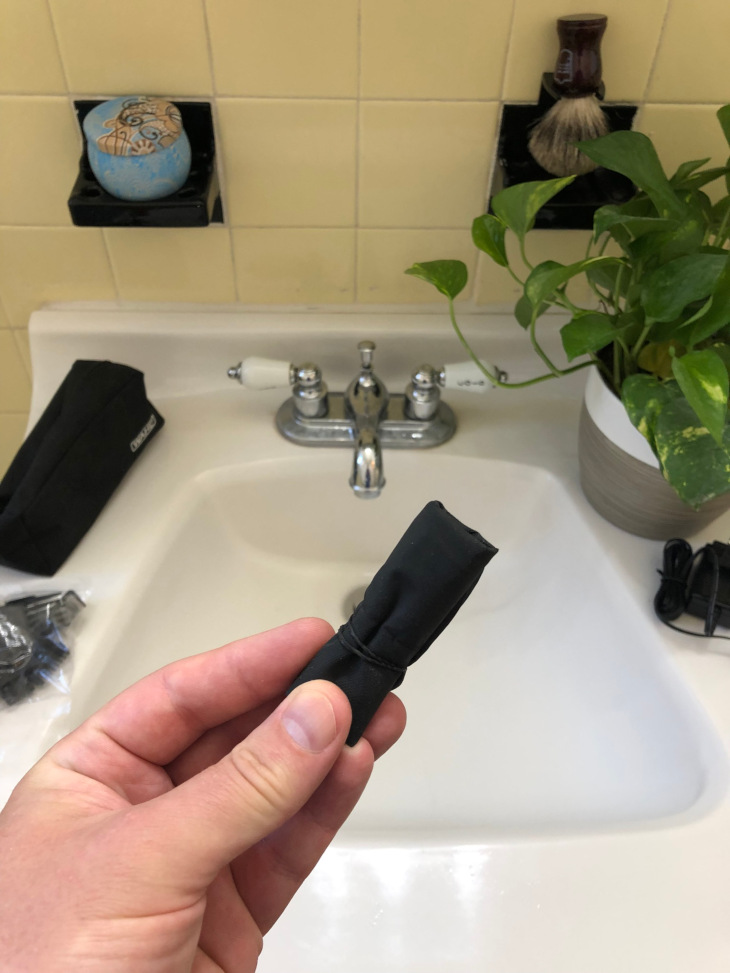 ...and when you unwrap it, it looks like this: 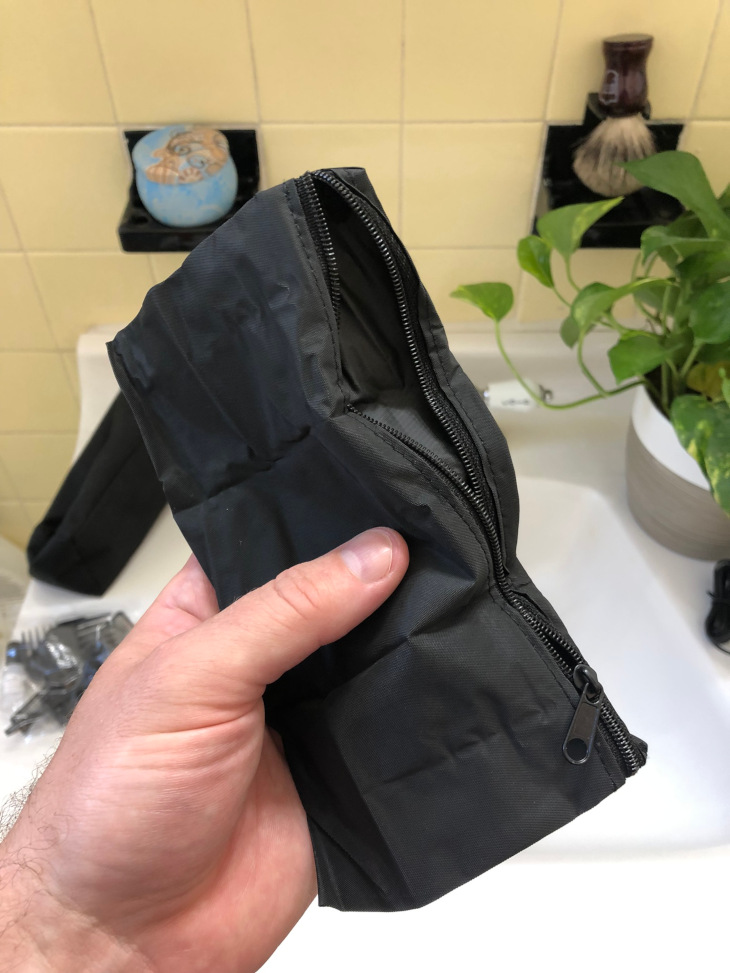 It gets the job done, but it's really flimsy, and if you travel a lot, it might not last too long.

Compare this to another mid-range Wahl model—the Wahl Lithium-Ion All-in-One Beard Trimmer—and you can see the difference: 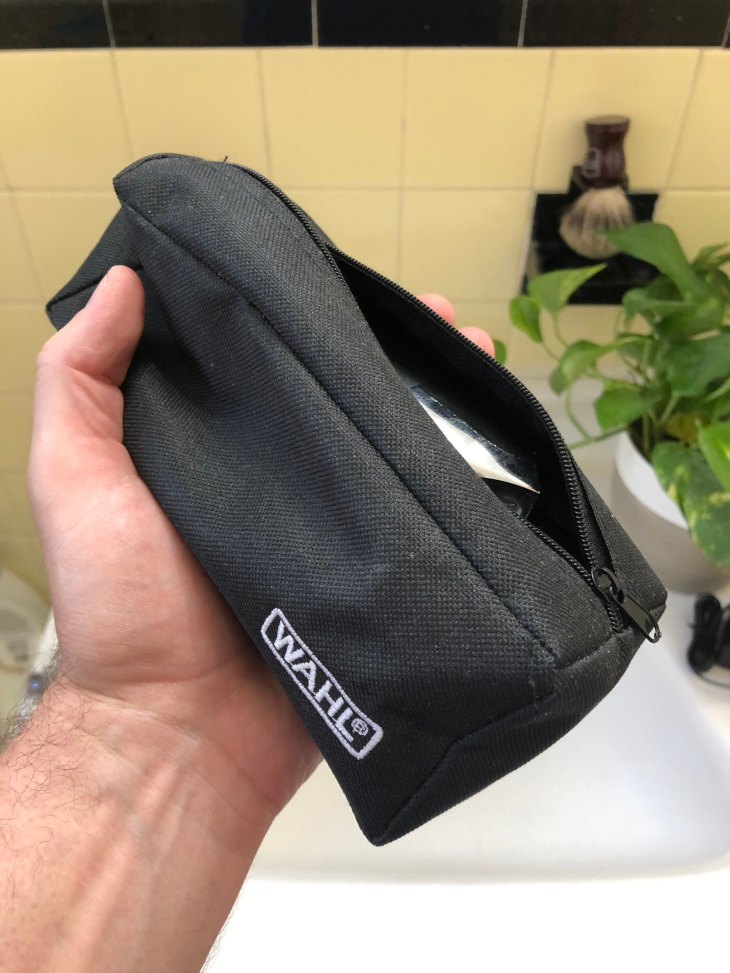 This is more in line with what you'll find with a lot of beard trimmer and clippers—a rugged, thick pouch that can take a beating.

If you're not going to travel that much, it's not a big deal, but if you like to roam—or you crash at friends' houses / love interests' houses—it's not the most durable thing in the world.

It's Not a Waterproof Beard Trimmer

This is the kind of thing you really, really need to be certain about, because... well, for obvious reasons. You don't want to get electrocuted using a beard trimmer that's not waterproof around water. The Wahl Beard and Stubble Trimmer isn't waterproof, so you have to be careful where you use it.

If you do most of your trimmer in front of the bathroom sink, that's not really a problem, but there are a lot of guys who like using waterproof tools, and if that's what you're after... you should look for another model!  We've written plenty about waterproof trimmers, if you'd like to read more.

This isn't really a mark against the model—most beard trimmers aren't waterproof, because most guys don't want to use them in the shower. But it is something to point out, especially if you were looking for something you could use in the shower.

It Doesn't Take Batteries: This is a Pro or a Con, Depending On...

…what you want from a trimmer. Some guys love trimmers with cords because it means they never have to worry about batteries, whereas there are plenty of other guys who might not have reliable access to an outlet, or who travel a lot, who find that corded trimmers are problematic. It all depends on your particular living situation. Here's how it seems to play out:

> If you have access to a plug in your bathroom and can reliably plug in the shaver. If you have roommates or a wife/girlfriend/partner who takes up a lot of counter space or will need that plug to himself/herself, it can be a pain.

> If you live alone, or have more than one plug in your bathroom, or don't mind fight for plug time, it's not really an issue that it doesn't take batteries.

It can also be a pain if you lose the charging cord.

Again, the "batteries vs. cord" issue is a personal thing, and some guys demand batteries, whereas other guys don't care. Find out what works for you.

Wrapping Up Our Wahl Beard and Stubble Trimmer Review

All in all, this is a good little trimmer! It's not the most exotic option out there, and there are fancier beard-and-stubble trimmers out there, but if you're looking for a just-the-basics, simple device to trim your beard, this is one of the ones we recommend. It's easy to put together, easy to operate, and fairly durable (with the exception of the bag, which, in our experience, is not). Other than that, though—a good model.

Hopefully there's something here that helps you—good luck, have fun, and happy trimming!

The Best Corded Beard Trimmer: Because Running Out of Batteries is the Worst

The Best Stubble Trimmer: Our Buying Guide and Product Reviews

How to Use a Wahl Beard Trimmer, Step by Step