Before we jump into our review, we want to express our appreciation for the name "Striking Viking." It's pretty brilliant, when you think about it: we use the word "Striking" to describe someone who is attractive or has a noteworthy appearance. That's great marketing, because after all, who doesn't want to look striking?

But the thing we like most about the name is that the word "striking" also describes the SCENTS. The entire scent line that Striking Viking makes is... well, striking! They're BOLD scents, and you know exactly what you're smelling. Vanilla smells like vanilla! Orange smells like orange! Lemon smells like lemon!

That's really fantastic, because very often, you'll get a new beard oil and you'll be excited about how it will smell, and you take a whiff, and... you're not even sure what you're smelling.

But that is NOT the case with Striking Viking. Their scents are strong, direct, and defined. And if that kind of thing does it for you, well, you're going to love Striking Viking.

If you don't like that sort of thing, well, this may not be the beard oil for you!

With all that in mind, let's get to the nitty gritty: what we like and what we don't. 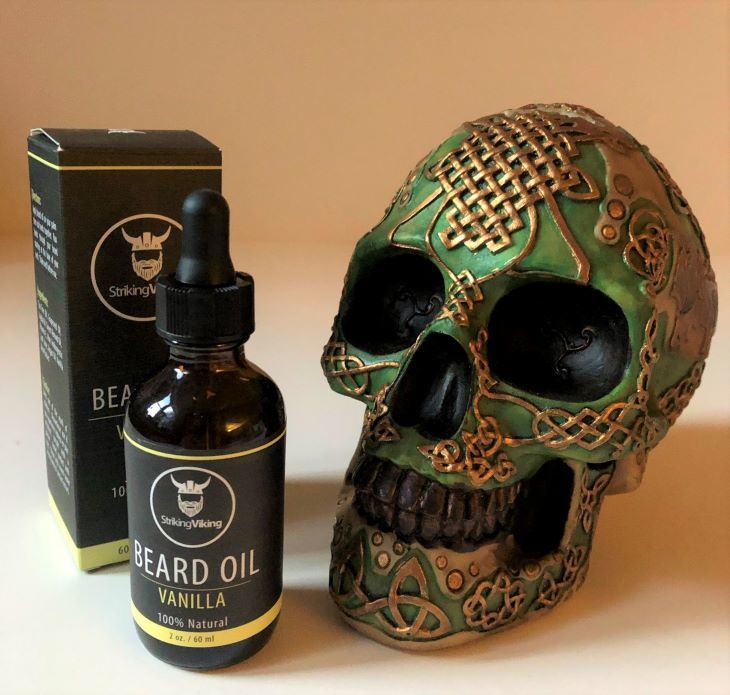 We discussed this above, and it's a good thing. The only downside to this beard oil smelling so strongly of vanilla is that it's a very sweet smell. This isn't the kind of *faint* vanilla you might get with a higher-end beard oil, where it's usually included in a melange of scents. It's common to find a tobacco and vanilla scent, where the two scents balance each other out a bit (and Crafted Beard Oil is a nice example of this), or a Vanilla Rum scent, which is sweet, but a more "complicated" kind of sweet (and Zeus makes a nice Vanilla + Rum scent).

You might be surprised that there are a LOT of beard oils out there that are basically one or two oils mixed together, along with an essential oil for fragrance, and... that's it. That's all it is. You could totally make it in your kitchen (and by the way, if you jump over to our "DIY Beard Oil" post, we tell you how to do that).

Many of these beard oils that only have one or two ingredients market themselves as "pure" or "uncomplicated," but in most cases, it's just laziness. Making a beard oil can be fun and imaginative, and creating a beard oil that's just two or three ingredients is sort of a cop-out.

And that's one of the things we love about Striking Viking's beard oils. They've got a lot of fantastic ingredients in them. Their Vanilla Beard Oil features jojoba and argan oil (both great for the skin and for your actual beard hair), tea tree oil and aloe vera (both of which have anti-inflammatory properties, and can be great for your skin), and Vitamin E (which has incredible healing powers for skin and can lighten scars if used long enough). That's all fantastic, and it doesn't even include the whopping portion of vanilla that's included in every bottle.

All of Striking Viking's Scents Match Each Other

Very often, you'll find a beard oil with a certain scent, and when you try another beard product from that same company that features that same scent, it SMELLS DIFFERENT. That drives us crazy, and why do beard companies do that, anyway? Most of the time, you don't want the scents to "clash," so you can wear two different beard products and have them complement each other.

Now's the part where we have to make a complaint about the product to seem like we're not biased, but the truth is, this is a well-made beard oil that does a great job moisturizing a beard and hydrating the skin beneath it. If there is one complaint we have, it would come down a matter of taste:

The Scents Are Not for Everybody

We talked about this earlier, but it really is THE issue when it comes down to Striking Viking: the scents are REALLY strong. And somehow also really sweet. Some have a sort of "candy"-like scent to them.

But... again! That's a good thing if you like it, and a lot of guys and gals like that.

If you're looking for a well-made beard oil that smells like the scent on the bottle, look no further. Striking Viking Vanilla Beard Oil smells strongly of vanilla. If you're looking for something a little more complicated or mysterious, this ain't it. This is a strong, straightforward, VANILLA scent.

We hope this helps. We absolutely love writing reviews like this, and if you have any questions, jump over to our “Contact” page and drop us a line. Be good, have fun, and happy beard!