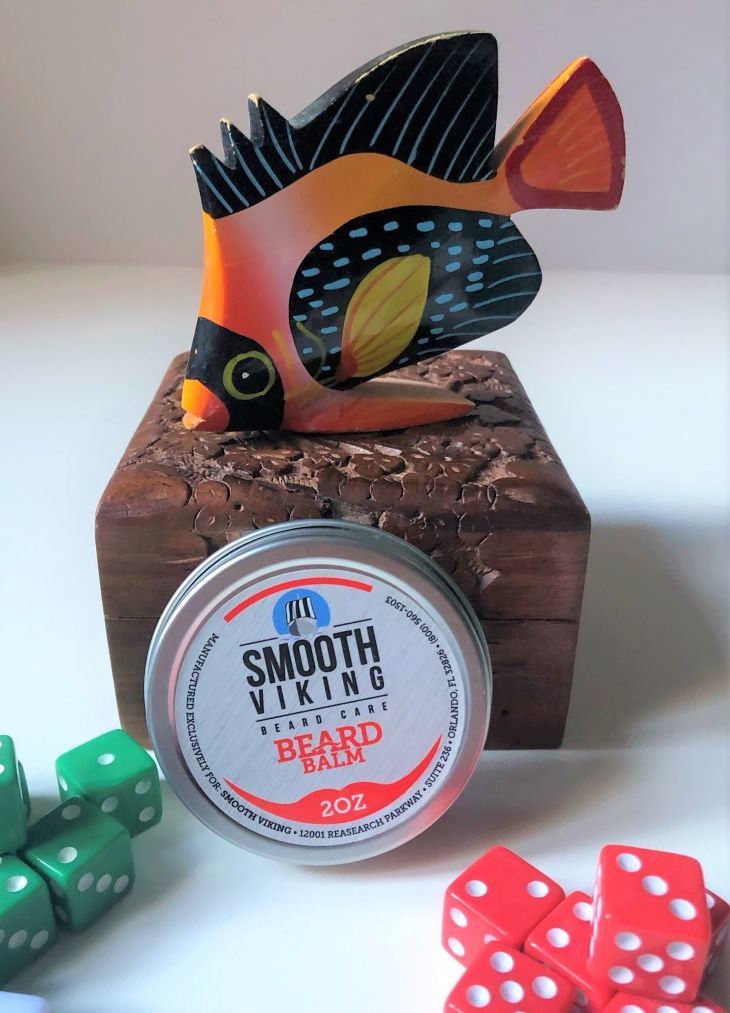 We'll dive into all this below, and if you're busy doing other things and just need an overview, well, here you go:

We actually think this is an above-average beard balm, not only because it contains some great ingredients (the most impressive of which is jojoba oil, which can moisturize both beard hair and skin), but because of the amount of hold it can provide your beard: it contains three waxes (bees, candelilla, and carnauba) whereas most balms only contain one (bees). In terms of providing body, we think this is one of the better balms out there. The only curveball is the scent: some people love it, some don't. It's a signature scent, meaning Smooth Viking makes it particularly for their products, and it doesn't smell like anything in particular—it's a mixture of things. The scent is clean and subtle—not too strong—and it doesn't overwhelm the nose, like some other beards oils do. Overall, very good.

OK, for the rest of you detail-lovin' folks, let's dive in, and start with...

This is one of the interesting choices that Smooth Viking has made: they didn't really name their scent. Most other beard balm companies trip over themselves trying to infuse their balms with powerful, familiar scents—and that makes sense (ha, it makes "scents"), because those fragrances make the beard balms easy to remember, and you don’t really need to purchase it to know generally what it smells like.

But Smooth Viking didn't do that—they created a signature scent that’s totally unique. Honest Amish did the same thing with their products, and the only way you can *really* know what it smells like is to smell it. It's not like a beard balm that has a lime smell—with that, you can imagine a lime scent, and imagine something like it. A signature scent can smell like anything, though.

So, what does it smell like? It's very hard to describe a scent, so we'll do this in two ways:

2) We'll describe it with adjectives. It's a soft smell, not overpowering, and it's not "bright"—it doesn't smell like citrus, or pine, or mint, or any of the other more aggressive scents you may find in a beard oil. It has a sort of "clean" fragrance, but it's not soap-y or medicinal. What's interesting, is that it changes a little bit after you wear it—it goes from "clean" to a more general, more "masculine" smell, somehow. Hard to explain, honestly, but that's our experience, and perhaps we're experiencing that general smell of wax. Again, not unpleasant, but not the "clean" smell it starts with.

The main thing to keep in mind when it comes to Smooth Viking's scent is that it's mild. They didn't overdo it—and it does go away after a while—which can be a great thing. Aggressive, powerful scents—especially ones that you put under your nose—can be overbearing, and most people seem to not like that.

When It Comes to Balms, We Think It's Your Best Bet for Styling

There are a lot of balms out there, and while it seems a lot of them advertise themselves as "styling" agents, they don't all come through on that promise. Viking Revolution Beard Balm is another beard balm we like a great deal, and it, too, advertises itself as a styling agent, but when push comes to shove, it doesn't really hold your beard in place.

And, after all, "styling" isn’t really a beard balm's primary function. A beard balm's primary function is to hydrate beard hair and moisturize the skin beneath your beard. That's what they're really designed to do. Because most are made with beeswax and shea butter, they do lend some "stiffening" properties to your beard, but it's not really enough to mold your beard and keep it in place.

That said, if you are going to use a beard balm for some styling work, we think Smooth Viking may be your best bet. It seems to have a lot of wax in it, and when you put your finger into the tin to retrieve some, you can actually feel that it's a little stiffer than many other balms. 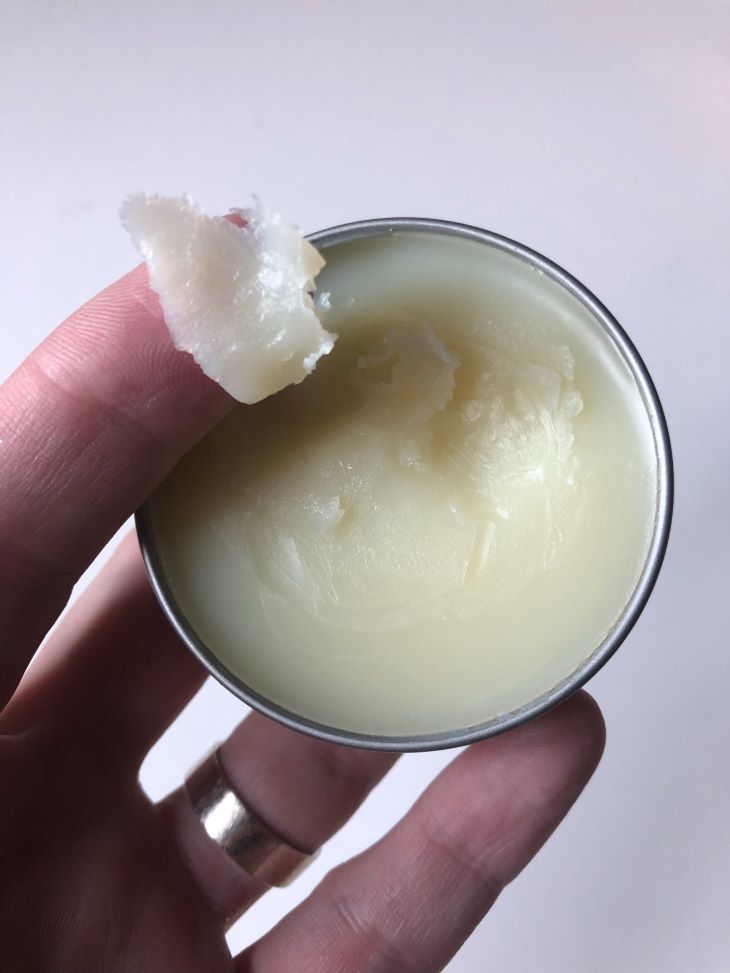 The ingredient list plays that out, as well: most balms only have one kind of wax—and that would be beeswax—but Smooth Viking also includes candelilla wax and carnauba wax as holding agents. We actually had to look that second one up, because we didn't know what carnauba wax was—it's a natural substance, derived from the leaves of the Copernicia Prunifera, which is a palm tree that grows only in Brazil. Neat!

So, Smooth Viking can provide some hold that other balms seem unable to. We want to reiterate, though—it's great for sculpting as far as beard balms go. If you have a really wild beard—or if you have a certain section of your beard that you can get to sit down and behave—you'll probably want something stronger, and we usually offer up Honest Amish Beard Wax as an alternative. It's a lot more wax-y—because it’s an actual beard wax, not a balm—and it can provide some structure that beard balms can't.

But if you're looking for a balm that can provide some body and a "full beard" look, this is the one we'd recommend.

Only One Scent! Booooo! (Kind of)

OK, we have to come clean here: we're obsessed with scents. If you've read any of our other reviews, you'll find that we spend most of the review talking about scents. It's our favorite aspect of beard balms, beard butters, beard oils, etc., and most of the time, we complain when a company makes a beard balm or beard oil in just a few scents. In most cases, the company will make two or three, and we want to see more.

But here we're going to go back on all that here and say that we actually like that Smooth Viking only makes a single scent, and here's why:

1) If you're not going to make a whole line of scents, one is the number to stick with. Some of those other companies—it's like they wanted to make a whole line of scents, but then they made two or three, and lost interest. Smooth Viking seems to be telling us, "No. We have one scent. You like it or you don't. Thank you for stopping by." And... there's something we can appreciate about that, maybe?

2) If you get overwhelmed by choices—and modern life comes with an absurdity of choices—having one option can be a relief.

So while we usually gripe a bit when a beard balm only features a single scent option, we won't complain here. Smooth Viking made the same decision that Honest Amish did, and that's to go big with a single scent. We think it works, and if you're looking for a beard balm offered in a range of different scents, we'd suggest checking out the Viking Revolution Four-Pack, which contains sandalwood scent, cedar and pine scent, bay rum scent, and clary sage scent. All are good, in our humble opinion. 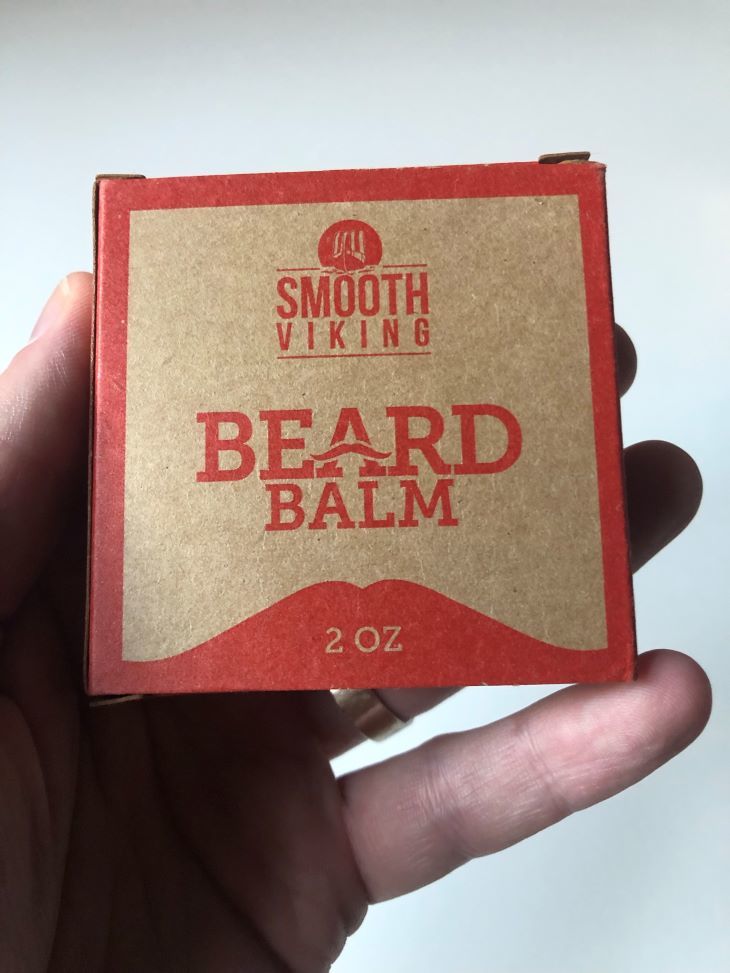 Alright... that looks to be about it! Let's wrap up our Smooth Viking Beard Balm review with one final observation:

"Smooth Viking" Is an Interesting Take

Vikings, obviously, are known for a handful of things—ship-building, pillaging, beards—and that's obviously why so many beard / male grooming companies go with the term "Viking." They're known for big, beautiful facial hair.

But Vikings were also—how shall we say?—not great with personal grooming? So that term "Smooth," as in "well-kept," or "organized," or "polished," is a great addition to the name. It insinuates all the ruggedness of Viking-hood, but with more "debonair" feel.

Anyway. We hope this helps—we like Smooth Viking Beard Balm a great deal, and we'd say it's above average, especially in terms of hold. The scent is great, but that's a highly personal thing, so we can really make any predictions there, and it's got some great nutrients (and a lot of wax). Thank you for tuning in, and good luck and good beard!