Remington F5-5800 Review: A Solid Electric Shaver That Punches Above Its Weight

Electric shavers can get VERY high-end, and while many of those models are great, many of those high-end features are unnecessary. That's not to say that discount shavers are the way to go—those can do a NUMBER on your skin, and can be downright painful—but a lot of guys get scared off by super-deluxe models.

And that's why we love models like the Remington F5-5800: it's nothing fancy, but it performs well, and has all the functionality we'd hope to see in a foil shaver. It's got... well, we're getting ahead of ourselves here, so keep reading if you're interested in our Remington F5 5800 Foil Shaver review. We'll start off with a summary and then get to the pics + details.

This is a really solid pick if you're looking for a basic-but-high-performing electric shaver. It doesn't really have any "deluxe" features (although you could make an argument that the 5-minute "quick-charge" feature is a deluxe feature, and it is, in fact, fantastic), but that's part of the charm of this model—it's not a high-end model, but it can deliver a high-end shave with minimal irritation (your mileage may vary, of course). If you're looking for a solid, reliable, get-'er-done mid-range model, this is one of the ones we suggest. There are fancier models out there, but if you're not looking for fancy pants features, we think this is a great option.

Alright, now let's get into the details.

The Foil is Both Strong and Porous 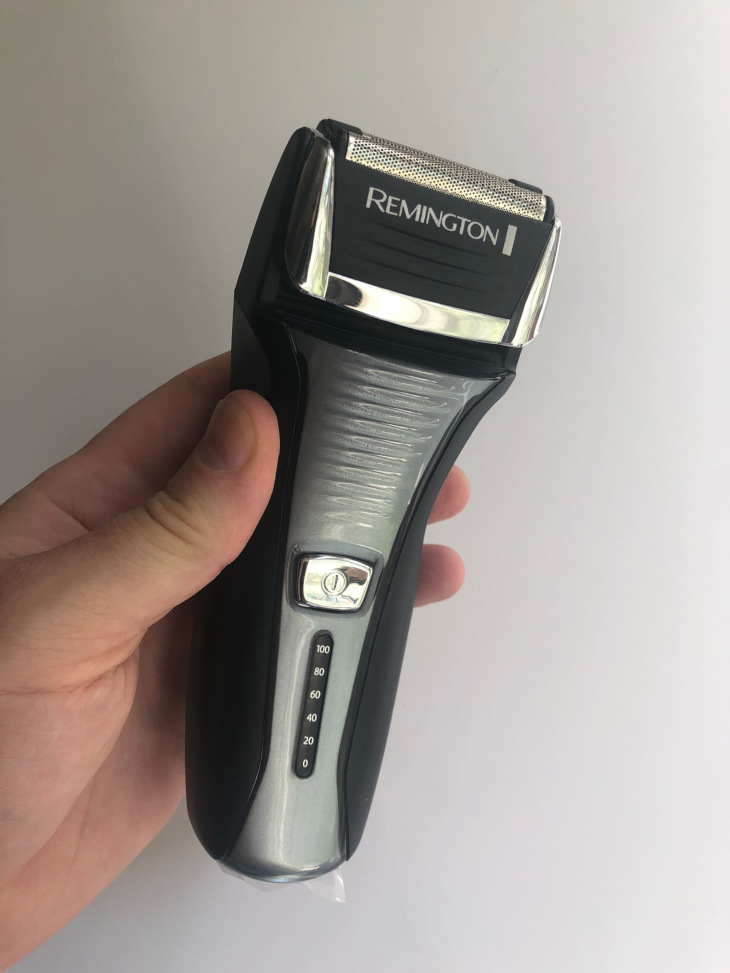 ...that the foil at the top of the F5-5800 is smooth and polished, and it looks like we'd want it to: it’s delicate enough to scrape over your face, while also sturdy enough to last a while. That's a different balance to meet.

If you look close, though, you'll see that the holes in the foil—the locations where your whiskers enter and are cut by the blades beneath—are wide enough for even thick growth. That's FANTASTIC, because a lot of electric shavers do a lousy job on thicker facial hair.

There's another factor about the F5-5800 that's designed to cut through thick growth, and that's the "3-Stage Cutting System." A "stage," in Remington-talk, is basically an area of the shaver that cuts facial hair. If you look at the shaver head, you'll see that there are two different foil surfaces (and we'll post an image below), as well as an area between the foils with very thin, very small horizontal bars in it. Those are the three "stages," and that middle area is designed to get the REALLY thick facial hair. The thinking is, whatever escapes that first foil usually gets caught and cut by the second, and then, for good measure, the third.

It works pretty well, and for an electric shaver in this range, it works VERY well. It may not work as well as some more deluxe models—some higher-end models have some impressive tech that "reads" your face and the shaver's motor ramps up intensity over thicker facial hair—but it most definitely gets the job done, and done well, in our opinion. Higher-end features are great, but they're not always necessary, if the shaver's design works well.

One of the knocks against foil shavers is that they're not as flexible as rotary shavers, and while there is SOME truth to that—the heads on a good rotary shaver can each flex in different directions as they travel over the skin—that difference really isn't that great, and we'd argue that foil shavers don't deserve the "bum rap" they get.

If you look at the F5-5800, the shaver head flexes in two different ways. The two foils have a decent among of "give" to them, and get flex forward and backward against your skin, as you can see here: 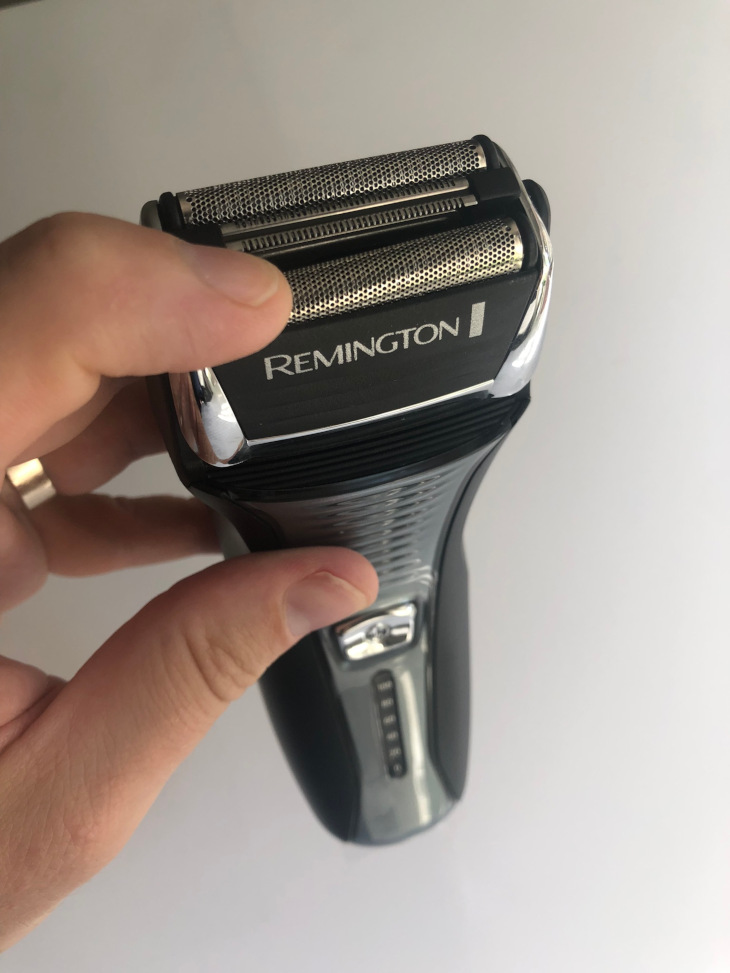 ...and entire head also adjusts according to how you hold the shaver and move it over your face: 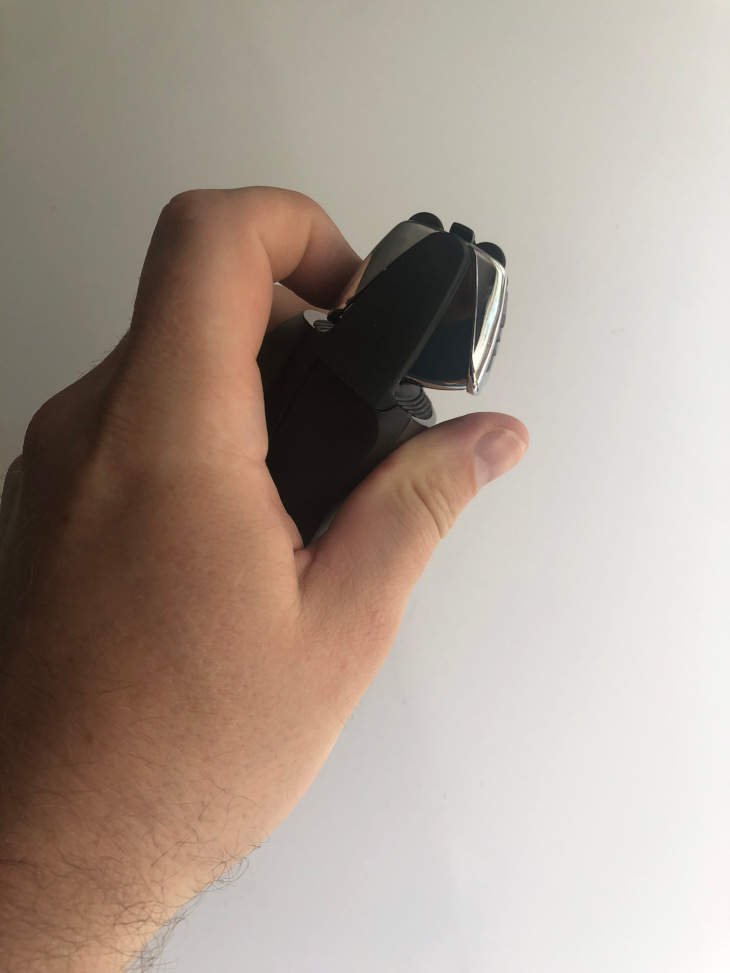 Between the two foils adjusting against your skin, and the head itself moving back and forth in broader motions in your hand, there's a lot to like here—it makes the device easy to drag over your skin, AND it can make the device easy and safe to use if you’ve got wrinkles or loose skin (and that’s why the Remington 5800 is one of our picks for best electric shavers for elderly men).

There are, of course, higher-end models that react to your skin, but for a mid-range model, this is really as good as it gets, and we didn't have any trouble maneuvering the device over our faces.

It Has a Capable (But Not Amazing) Pop-Up Trimmer

Pop-up trimmers are one of the neat add-ons that you'll see on most mid-range to high-end electric shavers. The Remington F5-5800 has one on the back side of the shaver, like so:

...and as far as pop-up trimmers go, it's pretty good. It's got some excellent teeth on it: 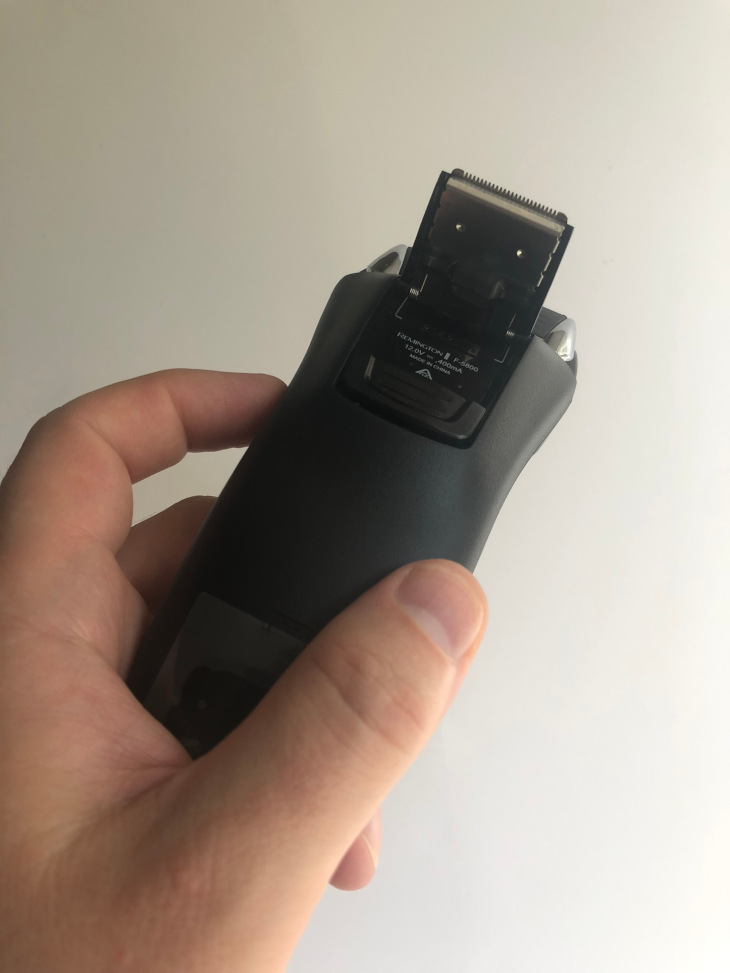 ...and it's a great way to trim sideburns, goatees, mustaches, etc. Pop-up trimmers are almost never as good as a dedicated trimmer, but they're still a great way to save time and effort—instead of reaching for a separate trimmer, you can use this tool to shape your edges, catch stray whiskers, etc.

The Quick Charge Function is GREAT

On some models, you'll see a "quick charge" function that allows you to "juice up" the shaver in only five or ten minutes. The idea is that your shaver has run out of juice, and in just five minutes of charging, you'll have enough juice for a good shave.

The battery itself lasts for about an hour at full charge, and that's VERY good. For whatever reason, electric shavers—both foil and rotary—don't last very long, and the most that manufacturers can get them to run is for an hour. The high-end ones have about 70 minutes, and the difference between that and 60 minutes... well, it's not much.

The nice thing about the battery, too, is that you know when you're about to run out of battery power. As you can see... 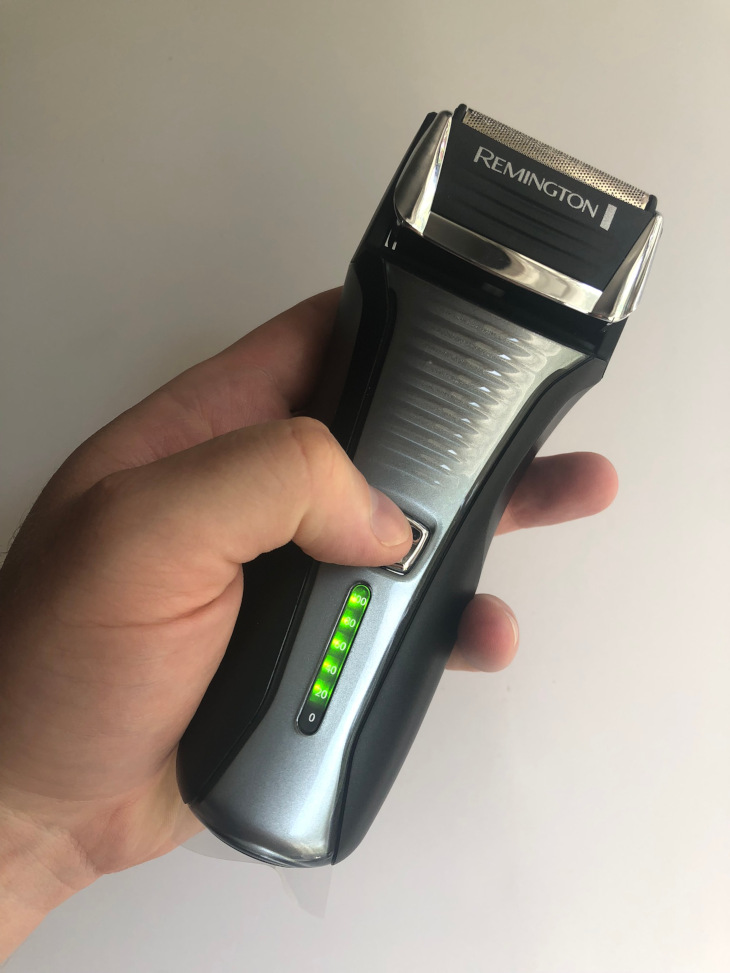 ...the device has a series of lights that let you know how much energy the shaver has left. It would be nice to have a percentage listed, but that's something only high-end models feature. This is absolutely good enough, and when you're down to a single green light, you know it's time to recharge.

It Has Corded AND Cordless Use, and That Is Very Good

It's Reasonably Easy to Wash

This is not necessarily the fanciest aspect of this electric shaver, but it's a great one, and it's one you never used to see on older electric shavers. Older models were a HUGE pain to wash, and honestly, it was enough to keep you using a steel razor. New electric shavers are way, way, way easier to clean, and that's fantastic.

The F5-5800 isn't the easiest to wash—that crown would go to any electric razor that has a dedicated cleaning station, where you plug in the shave, push a button, and the model cleans itself / removes hairs / lubricates itself—but it IS very easy to wash, and all you have to do is run it under water. That's great. If you hate cleaning your gear—and many, many guys hate cleaning their gear—the "run-it-under-water" feature is fantastic.

Press F5 to Refresh Your Face

We're curious why they named this model the Remington F5-5800. As computer kids, whenever we hear the term "F5," we think "F5 refreshers your browser." Maybe the good men and women at Remington imaged that the F5 model would refresh your face?

Probably not. But whatever. We're big fans of the F5-5800, and it's one of those models we recommend whole-heartedly. There are models that are fancier, but in terms of fundamentals—it can give a close shave, it feels good and is easy to use, and it's easy to clean—it meets all our expectations.

Alright—we hope that helps! Be good, have fun, and happy shaving!

Foil vs. Rotary Shavers: What Are the Differences, and Which Might Be Right for You?

How to Use a Foil Shaver: Basics, Tips, and Tricks

The Best Foil Shaver: Because Other Blades Can Tear Your Face Up