Sawyer Stay-Put Sunscreen Review: Our Pick for Year-Round Wear (and Especially for Those of Us with Beards!) 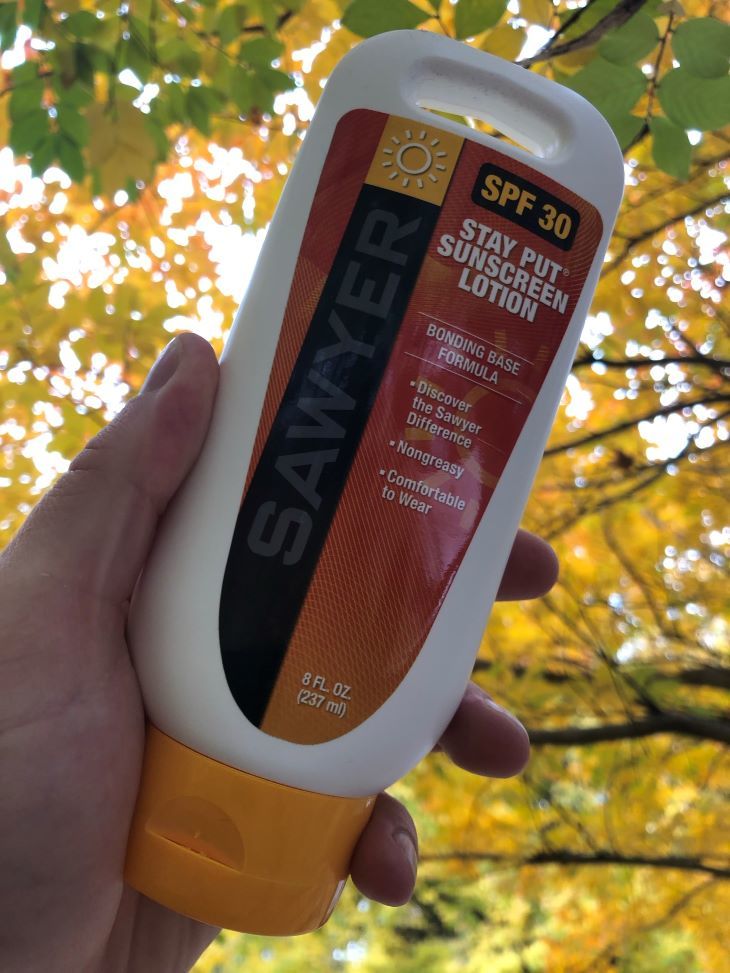 For some people, sunscreen is a bit of an after-thought: it’s something you need when you get to the beach, and you usually forget it, and then find something in the bottom of your backpack that does the trick. We know a bunch of people who have this approach.

If that describes your strategy, we envy you.

For us, sunscreen is a way of life. It's a major component of any daytrip or vacation, at any time of year, and it's absolutely necessary in order to avoid the sort of trip-ending burns that sometimes require hospital visits. It's a bummer, but it's true.

And, because it's so important, we've become VERY finicky when it comes to suntan lotions. In the way that some people may be connoisseurs of fine wines or restaurants, we are professional raters of suntan lotion. It's that important, and there are so, so many companies that get it wrong.

So, without further ado:

While Sawyer features a few minor imperfections, and we'll talk briefly about those, by and large we're BIG fans of this sunscreen: it covers completely without feeling slick or burdensome, it stays in place over multiple hours, and it's great for anytime-of-year wear (and we'll detail how below). It's also—and this is rare—a great option for those of us with beards. It would be nice if there were a companion lotion offered in a higher SPF for the face—we like that strip of SPF-50 down the nose—but in all other ways, this is truly a standout. Two unburnt, not-slick thumbs up.

OK! Let's get into the nitty-gritty:

It's Our Go-To Option for Year-Round Wear

For whatever reason, people seem to imagine that suntan lotion is an item specifically worn in summer. We're jealous of those folks who remain carefree and unburnt in the off-season, because that is absolutely not our experience of the sun. Even a winter stroll on the beach can result in redness and irritation (and sadly, it took us many mild burns to figure this out, because if the question is, "How—HOW—can you burn after a twenty-minute stroll on a cloudy day?" The answer is "Easily, and often").

So suntan lotion, for us, is a year-round necessity, across the follow season-specific activities: 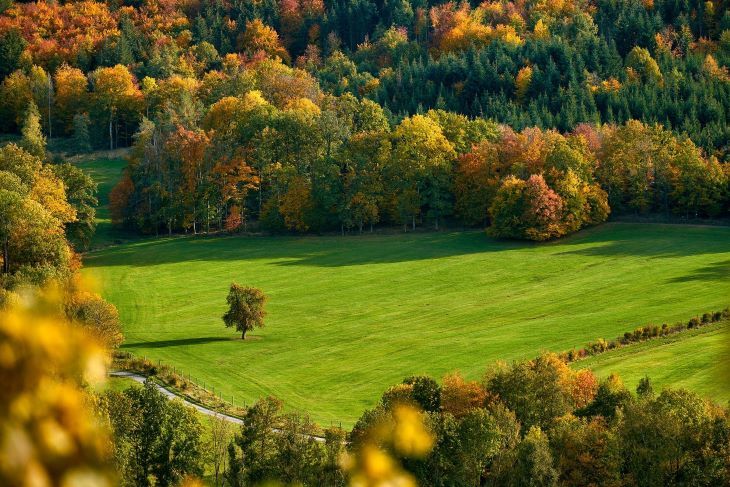 The autumn cycle of changing leaves and cooling temperatures is one of the most magical times of year for hiking and camping. Breezing through the woods and staking out a campsite on a cool, colorful afternoon is an incredibly peaceful activity, but there's actually a lot of gear and set-up involved, and after a long day of hiking, it can take a while to set up a sleeping environment.

There are a lot of suntan lotions—maybe even most!—that make these tasks utterly infuriating. If you've never had to assemble a 50-part tent with fingers that are slippery from suntan lotion, we pray you never do. It's enough to make a life-long meditator lose their mind, and it can make a very pleasant afternoon very frustrating. We've never had that issue with Stay-Put, which is delightful—it doesn't leave any of that slick residue on your fingers and hands that a lot of other lotions do—and we’re free to set up camp without frustration.

You might imagine that skiing is another gear-heavy activity—and it can be—but the real benefit of Stay-Put during the winter months is that it enables us to wear goggles without having them slide down our faces. That is, in a word, wonderful. The terror you feel when tearing down a slope, only to have your vision impaired because your ski goggles are slipping—well, it’s difficult to describe.

Obviously, you'll want to try this out for yourself, and take it easy with a slow-and-steady with a few test runs, but we've had good luck. 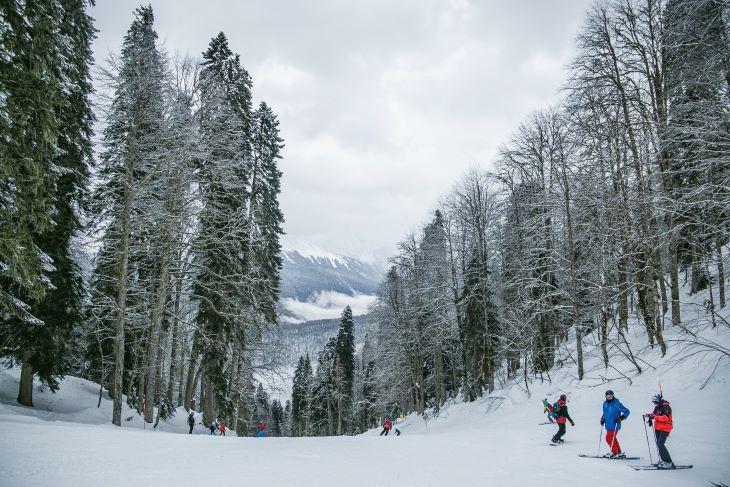 Where we live, there's an annual bike tour that brings us through every neighborhood in the city. The event usually starts in the morning, when it's either chilly or downright cold, and ends in the afternoon, when it's either warm or absolutely boiling. We've done this for a few years, and usually by Mile 10, we're dripping with sweat, and the swear is pouring down our faces, taking our suntan lotion with it.

Apparently, Sawyer Stay-Put features their Breathable Matrix Formula, which—and we're not scientists, nor have ever pretended to be scientists—but it seems like that means the suntan lotion is designed to adhere to your skin... below your epidermis? From their marketing material, Sawyer shares the following:

"While most sunscreens hold their lotions in the top two layers of skin, Sawyer Stay-Put SPF 30 sunscreen uses a special technology to bond the sunray absorbing agents deeper into your skin, uniquely penetrating where other sunblocks simply can't reach. Sweat and water pass over the deeply absorbed compounds without flushing the protective sunscreen away."

Again, we're not sure how that works, but we know that it does work, and that our most recent city bike touring didn't end early with us clawing at our eyes because our suntan lotion had seeped into them. Whatever is keeping that suntan lotion from sliding down our face—we're in love with it.

Summer: Taking It Easy and BBQing

You might imagine that we have the same problems in summer that we have in the spring—that is, excessive sweating—but that's not really the case! We try to take it easy during the summer (it's just so hot!) and we do a lot of picnicking, barbequing, and lounging around outside.

That sort of activity pairs very well with Sawyer Insect Repellents, and these products are actually designed to be used together. That's such an incredibly clever, and yet “so-incredibly-obvious” pairing of products, we're not sure why other suntan lotion makers don't do the same. Very clever.

So all that is wonderful, and reason enough for us to award high praise. But there's another factor we love:

It's a Surprisingly Good Option for Guys with Beards

That sounds odd, but think about it: when you have a beard, you have to figure out how to wash it (because the hair in your beard is not the same as the hair on your head, and you need special shampoos and cleansers). You need to figure out how to care for your skin (because whereas you can regularly exfoliate skin that you can reach, the skin underneath your beard is covered by whiskers, and can be difficult to reach). And you also need to learn how to avoid facial dandruff (which, yes, is gross, but is totally a thing).

So there are some weird issues you'll encounter when you have a beard, and many of them you'll never imagine until you actually have a beard.

And one of those issues? How to properly use sunscreen when you've got facial hair.

For guys with thick beards, it's sometimes not a problem—the facial hair can block a lot of the UV rays that can damage skin and result in a burn. For the rest of us—a majority of us, very likely—a beard doesn't provide enough protection.

And that's why Stay-Put can be such a great option for guys with beards: not only is it easy to work into a beard and lightly coat the skin, it doesn't feel heavy or dense. Sometimes suntan lotion can feel like a coating or a layering, but that wasn't our experience—this was more of a gentle topical ointment, and one we quickly forgot about. That's really you can ask for, when it comes to a suntan lotion.

It's also easy to wash out of a beard, which is a nice surprise. You'll need a beard cleanser—either a beard soap or a beard shampoo—but it comes our pretty quickly, and without too much effort.

Other Bits of Praise, Along with a Few Mild Critiques

What else? The lotion is free of oxybenzone, paraben, and dimethicone—all baddies which we try and avoid—and it's fragrance-free. That's a smart feature, because very often it's "fragrance"—that "it-could-mean-anything" ingredient that skincare companies often use—that makes people have a reaction to the product. So that's good. It's also manufactured in a 32-ounce dispensing jug, which can be fantastic if you're a company or team that needs a LOT of suntan lotion—camp counselors, lifeguards, that sort of thing. If you need gobs of lotion, that's a huge plus, and not all suntan lotion makers offer that sort of thing.

We mentioned that there were a few ways in which Stay-Put is not perfect. Alas, it's true. We would love, love, love if Sawyer also made some sort of higher-SPF lotion for the face. We weren't kidding, and we really truly need a higher-intensity lotion for just about any outdoor activity, so that would be nice to see. It would also be nice if there were some sort of aerosol option available—we know we're not supposed to want that sort of thing, but suntan lotion application can take so. very. long, and sometimes it's nice to having a “spray-and-go” option. We imagine, though, that Sawyer can't render the Breathable Matrix Formula in a sprayable format, and that's fine—it’s worth the wait to put it all on.

So those are our complaints—they're pretty mild, in the grand scheme of things.

Before we wrap up, though, we're going to mention one REALLY fantastic thing about Sawyer, as a company: 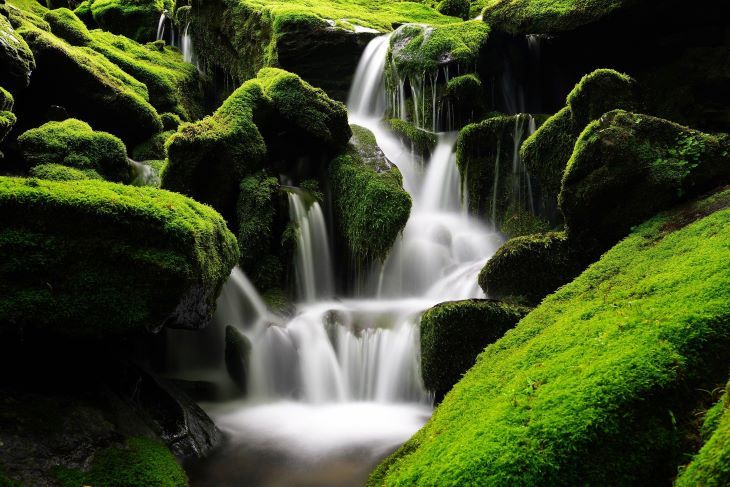 They're Truly Involved in the “Water for All” Movement

We're going to be very, very cynical for a moment: most companies make some sort of effort at making the world a better place. And that's great—for the longest time, large companies and corporations made no such efforts—so their investment in people and the environment is wonderful.

But—and this is a sad fact—many of those corporate efforts simply don't ring true. They feel contrived, and it seems like whatever time, effort, and money the company puts into the cause is minimal and often forgotten over time. It's unfortunate, but many companies simply pay "lip service" to whatever cause-du-jour seems interesting, and eventually go back to their regular corporate shenanigans.

Sawyer, on the other hand, seems to be have made a genuine and long-term commitment to one of planet Earth's most important issue, which is access to clean water.

In fact, when you visit the Sawyer website, you may actually find it difficult to get a section discussing Sawyer's products! Much of the homepage discusses clean water, how Sawyer is involved, and how you can get involved. All that is absolutely fantastic, and it is truly a breath of fresh air—and we wish all companies would take note.

That's a Wrap on Sawyer!

Alright! That’s it from us. Good stuff! Not perfect, but about as close to perfect as we get in our ratings. We hope that helps—be good, have fun, and enjoy the great outdoors!