You might imagine that a beard comb is a beard comb—that as long as you can run it through your beard without tearing the whiskers out of your face, it's a quality product, right?

Sadly, no! Believe it or not, there are a lot of terrible combs out there, and you’d be amazed at how lousy some of them are. This is one of the better ones we’ve come across.

Here we'll provide our Viking Revolution Beard Comb review. If you're not willing to dive into the minute details about a comb, we totally get that, so we'll start off with a summary and you can be on your way. If, on the other hand, you're obsessed with details (like we at Rough and Tumble Gentleman seem to be), we'll go into the nitty gritty about why we like it. Here we go:

With a dual design (wide teeth on the top, narrow teeth on the bottom), the Viking Revolution is designed to let you work out some larger knots in your beard and then flip it upside down and do some fine-tuning. It smells nice, it's great for travel either locally (you can throw it in your back pocket) or far-and-wide (it takes up almost no room in a suitcase or backpack) and it can do a good job of distributing beard oil/balm/butter throughout a beard (but not as good a job as a beard brush, and it's not a suitable replacement for a comb—but no beard brush is; most guys need both). Overall, a solid pick, in our humble opinion.

Alright, now to the nitty-gritty:

It's Got Both Wide-Set Teeth and Narrow-Set Teeth

This is perhaps our favorite aspect to this comb—it's got a row of wide-spaced teeth/tines at the top, and a row of tightly-spaced teeth at the bottom. It's weird that every beard comb isn't manufactured that way, and we're not sure why that is.

What's more, is that the teeth are well-made—they're delicately rounded at the top (and that's the case for both the top teeth and the bottom teeth), and that makes them easier to work through your whiskers to get things going. Here’s what that looks like: 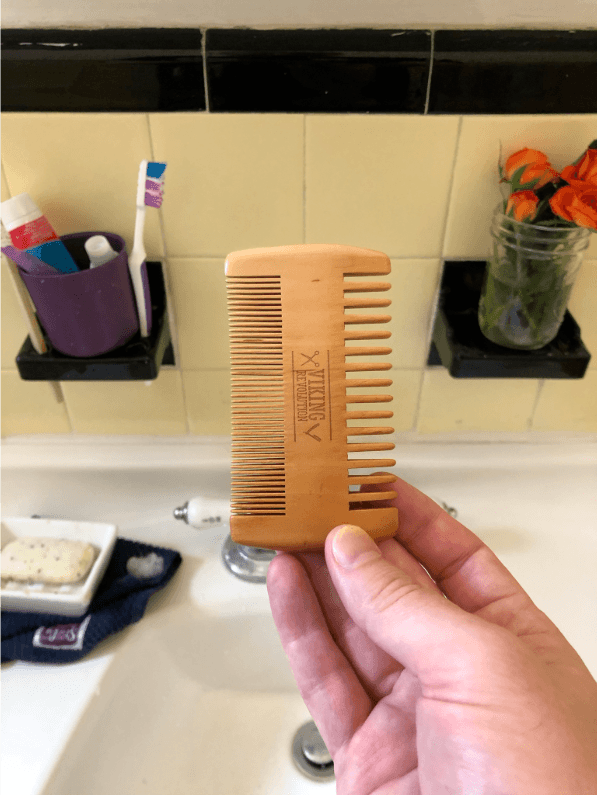 It's Actually Made of Wood, and Not Some Weird Wood-Like Knock-Off

The comb itself is made from all-natural green sandalwood, and it smells pleasant. It's not a very strong smell—sandalwood is usually a pretty gentle fragrance, and actual sandalwood wood is very gentle—and that's nice. We've come across a few combs that say they're wood, but they have a weird texture and smell, and that's awful.

By the way, what's nice about the scent is that...

It Smells Good, But More Importantly, It Doesn't Smell Bad

It may sound weird that we mention this, but there are a few beard combs out there that actually smell bad when you get them. We're not sure why that is—maybe it's because they're made from weird synthetic materials, or from... who knows. All we know is that there are some that don't smell good, and this one actually smells nice.

It's worth noting, though, but this comb can *start* to smell bad—like, really bad—if you 1) use a lot of beard products, like beard balm or beard oil or beard butter, and 2) don't clean it properly. Like all beard combs and brushes, you're going to have to wash it.

We'd recommend cleaning it after use—just run it under warm water and rub the surface and teeth of it—and especially if you use the leather sleeve it comes with. If you have a bunch of beard balm and butter and other various gunk on the comb and you put the comb in the sleeve without washing it, it'll eventually smell terrible. Most of those beard products are made with natural ingredients, and they'll begin to rot after a while, and your comb will smell RANK. And then, if you don't clean it, you'll be combing all that rotting material into your beard...

Gross. This is all to say, the comb is great, but you have to wash it.

We Just Mentioned That Sleeve...

So here's a photo of it:

Nothing special about it, really, but very nice that they included it.

Good for Travel / Sticking in Your Back Pocket

This, actually, is one way that beard combs—and especially dual-sided beard combs—have an advantage over beard brushes: they're flat. Not only can you stick in your back pocket so you can refresh yourself during the day, but it makes for a great travel comb—you can throw it in a suitcase or backpack and it takes up an incredibly small space.

We might offer one word of caution about putting it in your back pocket—and the end of the day, it *is* wood, and wood is not indestructible (and that's especially true for wood cut to this thinness). If you put it in your back pocket, you may want to stick it in there horizontally, rather than vertically, because it can snap in half if you put too much pressure on it, and that’s more likely to happen if it’s vertical.

That's not a critique of this comb, mind you—the comb is probably as strong as a wooden comb can be—it's more of a "heads-up" about storing any kind of wooden comb in your back pocket.

It's Got Anti-Static Construction

Alright, we're going to be very open about this: we do not understand the scientific laws that govern static—the electrons, and negative ions, and all that, how wood... something something. We don’t even know how to describe what we don’t know.

We don't understand any of that, and we probably wouldn't understand if you got a scientist who... knows about static and wooden combs... and got him/her to explain it to us.

For that, we've disappointed you, and for that, we are sorry.

HOWEVER, we can say that this comb is marketed as an anti-static comb, and we can also say that we, personally, have never experienced any static or little shocky-shocks when using it. That's not to say it won't ever happen, but this (currently) is our go-to comb, and it's never shocked us. So—so far, anti-static.

Alright, so there you have all the good news—that's everything we like. We only have one or two criticisms of the comb, and they are:

It Can't Technically Do the Job of a Beard Brush

Some people make the assumption that because the Viking Revolution Beard Comb has two different sets of teeth, that it can substitute for a beard comb. That's not really the case, sadly—the comb, with its two set of teeth, makes it a stand-out among beard combs, but it can't really replace a beard brush.

That's not a knock against the Viking Revolution Beard Comb, it's more of a statement of any comb's limitations. A beard brush is made from super-fine, super-stiff bristles, with good ones are made from boar's hair, with lesser-models made from horse hair, and lesser-lesser models made from synthetic materials. Those bristles can make your hair soft and straight, and what's more, they can distribute beard oil or balm very effectively. Beard combs can't really do that—they're about untangling knots with the wide side, and then introducing some shape with the narrower side.

If You Like the Comb but You're Also Looking for a Brush...

You may want to check out the Viking Revolution Beard Comb and Beard Brush Set. It's got the dual-sided comb, a beard brush with boar's hair bristles, and a small scissors for doing detail work. It's a nice little package.

There's one other critique we have to offer, and that is...

There May Be Some Demarcation in the Wood

This, too, isn't really a knock against the comb itself or the quality, just another "heads-up" about what you can expect from a wooden comb: because it's wood, and because wood is a natural material with natural imperfections, you may find some knots or flecks or natural marks in the wood. Here's one:

A Quick Brush-Up on Combs

There you have it! All of our hopes, dreams, and fears regarding the Viking Revolution Beard Comb. All in all, we think it's a great model, and it's been our go-to comb for a while now. Even though it's a dual-sided model, it can't do the job of a good beard brush, but other than that, a sold choice, in our humble opinion. Thanks for reading, and all the best!

The Best Beard Comb for Style and Shape