Shaving Against the Grain: A How-To Guide

Have you ever shaved against the grain? If you have, chances are you’ve gotten a very close shave—followed by some truly irritated skin.

There’s a right way to do it, and there’s a wrong way—and if your skin is red and painful when you’re done, chances are you’ve done it incorrectly.

So here we’ll do a deep dive into shaving against the grain. We’ll explore the advantages and disadvantages of the practice, list some “do’s and don’ts” if you want to give it a shot, and then provide a step-by-step guide to give you the best odds of an irritation-free—and very close—shave.

And, of course, we’ll plug wet shaving, because that’s just what we do around here. OK: 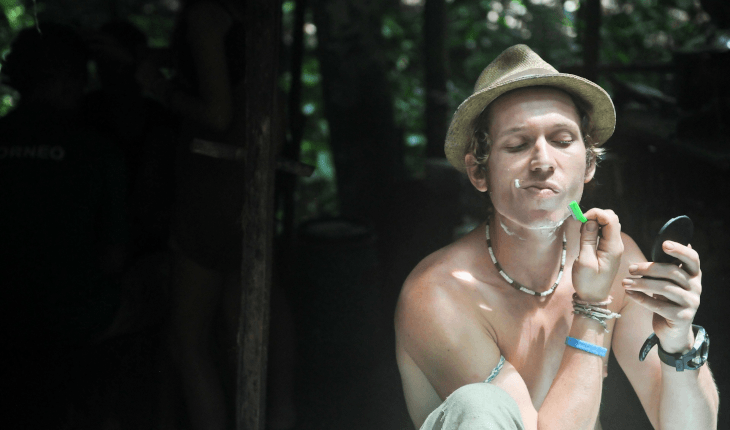 Going Against Your Grain: Advantages

There’s only one real advantage, but it’s—well, it’s the biggest advantage you can get when shaving: you get an extremely close shave.

That’s the whole point of shaving, really, and going against the direction of your whiskers is the most effective way of doing it. Instead of your razor attacking whiskers that are leaning away from the razor, the razor attacks them when they’re leaning into the razor. In other words, your razor cuts the whisker at its root, removing the maximum amount of the shaft.

The result is a shave the looks clean, and not only that, it’s a shave that feels clean. If, after you’re done shaving against the grain, you run your fingers against the direction of the grain, your skin will feel soft—almost as though your whiskers are completely gone.

However, if you run your fingers against the grain after shaving with grain, you’ll notice that you still feel a little stubbly. That’s a big difference—especially if your whiskers grow in quickly.

So there’s only one advantage to shaving against the direction of the grain, but it’s a big one, and the reason you shave in the first place: it’s the most effective way to remove whiskers and have smooth skin on your face.

Going Against Your Grain: Disadvantages

Whereas there’s only one advantage to going against the direction of the grain, there are a bunch of disadvantages. They include:

Razor burn. We’ve mentioned this elsewhere on the site, but shaving isn’t really a natural process. There are not, as far as we know, any other animals that take a sharpened blade and scrape the hair off their bodies. Plenty of them shed, but none actually shave.

And that makes sense, really—shaving is very traumatic for your skin! It pulls the skin in all sorts of odd directions, nicks you left and right, and then slices through the hair your body has created to protect itself. It’s kind of weird that we shave at all, actually!

Razor burn is an inflammatory reaction to shaving—it can take the form of a small rash, a hot/burning sensation in a particular area, small red bumps, or general itchiness. It’s common among men (and women, and anyone shaves), and it’s very common among men (and, again, women) who shave against their grain.

Razor bumps. If you’ve never experienced razor bumps, you’re a lucky guy. It’s awful. And, if you’re wearing a collar and you’ve got razor bumps on your neck where the skin meets the collar—and that collar rubs against that irritated skin all day—oh, man, is that torturous.

It’s so serious, in fact, that it’s got a medical name: pseudofolliculitis barbae.

Here’s why razor bumps occur, and why they’re so agonizing:

When you shave improperly against your grain, you’re not totally removing the whisker from your skin—you’re merely slicing the top of the whisker off, and if you’ve got curly whiskers—or if your whiskers don’t point away from your skin—those whiskers can actually get stuck inside your hair follicles, and grow into the skin.

The result is usually as bad as razor bumps—rashes, redness, and irritation—but it can be even worse than razor bumps, and can result in pustules, which are pus-filled lesions on the skin. You can view some images of them here, but just a heads up—they can get pretty gross.

So, razor burn, razor bumps—have we properly scared you straight about the risks of improperly shaving against your grain?

If not, hang on to your hat, because there’s more:

It becomes a vicious cycle. Once you’ve got razor bumps or razor burn, it often results in a more razor burn/bumps. If you continue to shave, you create more irritation, or even worse, more ingrown hairs—and those hairs grow a layer of skin on top of them, compacting the problem. Yikes.

So let’s jump in to what you should do if you want to shave against your grain, and not irritate the heck out of yourself. 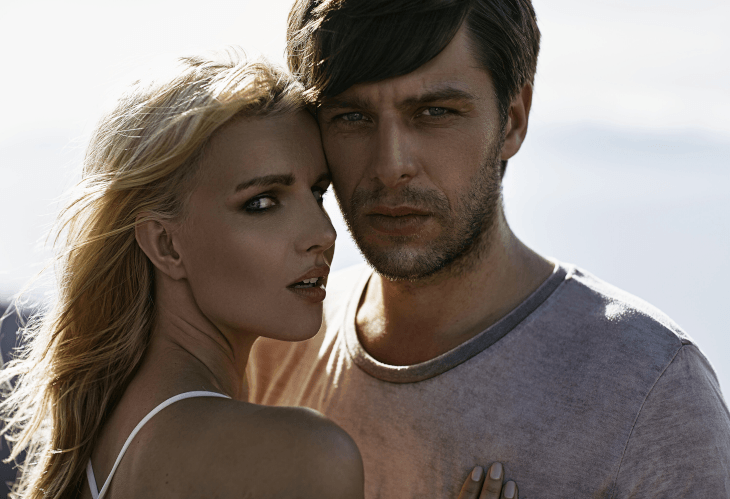 How to Shave Against the Grain

​There are a lot of guys who shave against the grain, and there are even forums where you can discuss it in detail. All told, it's not that difficult, and we’ll break it down into steps. First:

Let’s quickly define what we mean by “with” and “against” the grain.

If you look in the mirror when you have a day or two’s worth of stubble, you’ll see definite lines of growth. Some whiskers grow upward and some grow downward, and the directions of your whiskers will vary across your face and neck.

With that knowledge, take a close look at each area of your face. Whiskers usually grow in predictable directions—your sideburns grow downward, the whiskers underneath your chin grow upward—but that’s not always that case. Every man’s face is different, and that’s why you need to develop a personalized grain map, so you know when you’re shaving with/against your grain.

After a few weeks/months/years of shaving, you’ll probably have an intuitive sense of your grain map, but it’s a good idea to take a look and observe it anyway.

Pro-tip: To further confuse things, a lot of guys have whiskers that grow in swirls, instead of straight up or down. We’ll talk about that in a minute, as well.

Now that you’ve got your grain map handy:

Think about Ditching the Disposable Razor… 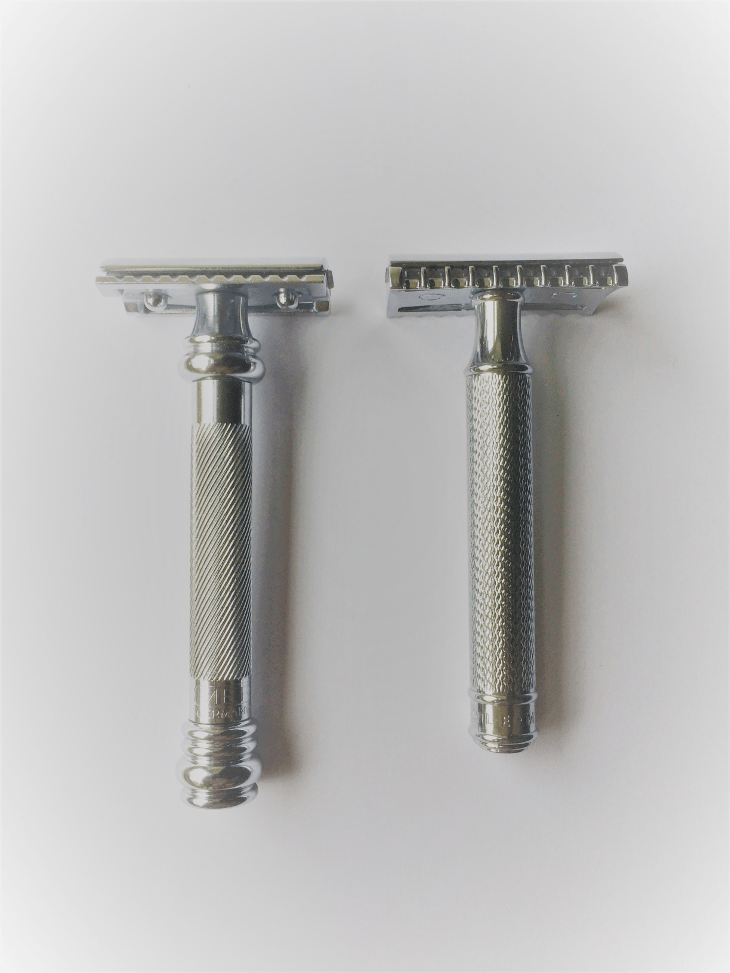 Safety razors are usually better for shaving against the grain, because they’re incredibly sharp, they’re heavier than disposable razors (and that can make a difference in the quality of your shave), and you can replace the shaving blade every time you shave, so that you’re always getting a close shave.

Their biggest advantage, though, is that they’re incredibly sharp. When it comes to shaving, dull is dangerous, and you’re more likely to experience irritation when you shave with a dull razor—and disposable razors are often made from second-rate steel that’s not as sharp as the razors you’d use in a safety razor.

If you use disposables and they work for you—no irritation, no bumps, no nothing—that’s awesome, and we’d never try to influence you to try something new. If, however, you’re experiencing irritation, a lot of guys have had an “a-ha!” moment when they switch to safety razors.

Get Your Face Ready for the Shave

​One of the reasons men experience irritation when they shave is because their whiskers and their skin aren’t properly prepped for the shave.

Have you ever touched your skin right after a warm shower? You can feel that it’s soft and relaxed, and that your whiskers, too, are soft and pliant. That’s the perfect situation for a shave—excess oils are removed from your skin, so the razor can travel smoothly over your epidermis, and your whiskers are loose and ready to cut, instead of rigid and tight.

If you’re going to shave ATG, it can help a great deal if you shower and get yourself ready.

If you don’t have time for a warm shower, you can clean your face with a warm washcloth. Try to keep the washcloth on your face as long as possible, so that your skin can relax and loosen a little bit.

Use a Pre-Shave Oil and a Shave Cream

Pre-shave oil is one of those things that most shavers don’t know about, but it can be a lot of help when it comes to against-the-grain shaving: it coats the skin with a nice lubricant, and allows your razor to travel over the skin.

Your selection of shaving creams can make a difference, too—a lot of guys find that the “cream-in-a-can” shaving creams (which are loaded with weird chemicals) irritate their skin, and they have better luck with shaving creams with a more “natural” list of ingredients. Taylor of Old Bond Street makes a great all-natural shaving cream, as does Proraso.

(By the way, pre-shave oils and all-natural shaving creams are part of an old-fashioned wet shave, and we’ve written a lot about that process. If you’re interested, you can learn more here).

Now here’s the most important thing when it comes to shaving against your grain—if you only remember one part of this post, make sure it’s the next section:

Complete Three Passes: With, Across, and Against

Remember how we keep saying there’s a right way and a wrong way to shave against your grain? Well, here’s the right way:

In order to increase your odds of getting an irritation-free against-the-grain shave, you need to first shave with the grain (WTG), then shave across the grain (XTG), and then shave against the grain (ATG).

You’ll need to remember your grain map, so you can shave:

With the grain (WTG): The old stand-by. This is your first pass. It’ll take off that base layer of whiskers, and get your skin ready for the next two passes. You may still feel a little bit of stubble after your with-the-grain pass, and that’s OK.

Across the grain (XTG): This is your second pass. This one may sound odd to you, but it’s actually really important—and really effective. Basically, you want to bring your razor perpendicular to—or across—the direction of growth. The XTG pass removes a good chunk of the base of your whiskers, but it doesn’t push the whisker backwards into the skin, which means your skin may experience less irritation. Once you’ve completed the XTG pass, you finish up with a pass…

Against the grain (ATG): This is your third and final pass. Now that you’ve taken two passes at your whiskers, there’s only a little bit of the whiskers left, so your final pass won’t tug at the skin too much. Also, because the whiskers are so much shorter, they offer less resistance to the razor—and that invokes less of an inflammatory reaction from the skin.

In other words, your final pass—the against-the-grain pass—removes the last bit of whiskers from your face.

The key to success is to take it nice and slow, and that, actually, is another disadvantage of shaving ATG—it takes a fair bit of time if you want to do it correctly!

Rinse all the shaving cream off your face, pat yourself dry with a soft towel, use an alum block if you’re nicked up, and consider a soothing aftershave balm to fortify your skin a bit.

And… that’s it! That’s the safest way to shave against your whiskers’ grain.

Let’s Re-Cap and Close Out

Shaving ATG is the most effective way to get a really close shave—but doing it improperly can result in irritation razor burn or painful razor bumps.

The safest way to go against your grain is:

1) To use a safety razor, instead of a disposable / multiple-head razor;

3) Further prepare for the shave with a pre-shave oil and an all-natural shaving cream; and finally

We hope that helps—good luck, and happy shaving!

Shaving Tips for Guys in Their 60s and 70s

Presents for Pops: 80 Gifts the Dad in Your Life Will Love

Shaving with Cold Water: A Primer