One of the best things about running a blog devoted to beards and shaving is that you get to meet some really wonderful people who are building some really fantastic companies. Not every company is wonderful, and not everybody running those companies is fantastic, but there are a lot of really amazing ones out there, and we feel grateful that we can talk about the ones that really do great work.

Here we'd like to shine a light on RazoRock. They make some truly stellar products—standing out among the many, many other companies in the game—and in our communication with them, they sound like really great guys. They're not as big as some of their competitors—Proraso, for example, may have more name recognition, and we discuss that below—but we think they're on to something special, so we thought we'd chime up.

Before our review of two of their most popular products—their shave soap and their alum block—let's talk a little bit about the company, aka...

"The Italian Stallions in the Shaving Game"

When it comes to beard and shaving companies, there are a LOT of players in the game. We're not talking dozens of companies that make beard and shaving products, but hundreds (and up until a year or two ago, that number was probably over a thousand). There is an incredible amount of competition.

There are a few that embrace the Italian Barber tradition, a that's where RazoRock falls. In that category, you've got Proraso—which makes great products, but has lost some of their appeal (and quality) after mass-marketing a lot of their shaving goods—and Cremo, which sounds Italian for "Cream," but is actually just two dudes in California. When it comes to the art of Italian barbershop tradition, there's not too much out there.

And that's the reason—or one of the reasons!—why RazoRock is special: they represent one of the last true Italian barbering companies in North America. In their “About” page, the founders (Joseph and Michael) describe a trip to Tuscany, where they discovered the magic of alum block (which we'll talk about in a moment), and how their business was born. If you look at their logo, they capture that inspiration, and use the Duomo di Firenze as their logo (or so we've assumed!—if that's not the Duomo in their logo, it looks a LOT like it!).

There's something powerful in that story. As we've mentioned, beard and shaving companies became really popular a few ago, and there are scads of them. It's not common to see when a company actually has a meaningful connection to the products they make.

Alright, so let's get to it: the products.

The Shaving Soap Smells Tub is Easy to Use!

Right off the bat, we're big fans of the jar: 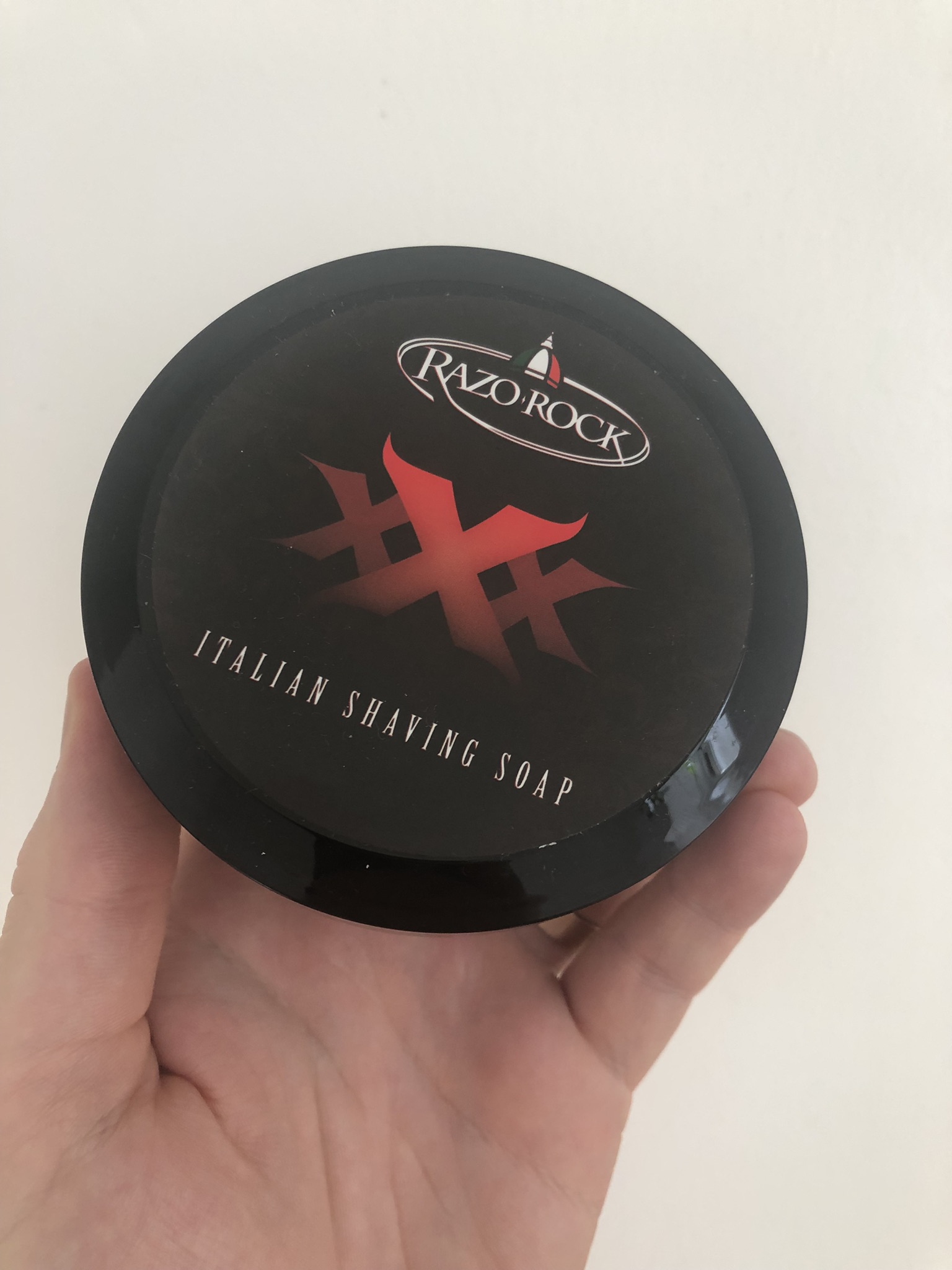 There are a few shaving creams out there—that shall remain unnamed, because we don't really believe in trashing companies that are really trying to do their best—but there are a few companies that make shaving creams that have airtight lids that you have wrestle off—all while your hands are wet from being in the shower. It drives you crazy! It's even more common with shaving soaps that come in tins—they're an incredible hassle to open, and using them can be frustrating.

So right out of the gate, we're going great. Twist, sniff, get going. And that's fantastic because...

The Smell is Unique and Masculine

In our more honest moments, we'll fess up: we're in this for the whiffs. We love shaving, we love beards, but most of all we love SCENTS (and if we ever start a new website, it'll be about cologne or something—that'd be fantastic).

The fragrance of the RazoRock shave cream is that classic Colonia scent, that's fresh and crisp—it's clean without smelling soapy or floral. It's got (according to the RazoRock website) portions of...

It's a little bit different—at least in our experience—from the classic *American* barbershop scent, which tends to rely a little more heavily on sandalwood. It's a really nice balance, too, because that mixture could definitely be "too much," but it comes across as really enticing.

It's Got a Really Great Feel

We didn't realize at first that RazoRock calls this a soap. We actually really like that, because in our experience, it exists somewhere in the space between a cream and a soap, and that's GREAT. It’s a little thicker than you’d expect. Traditional creams whip up into a nice lather but they seem to disappear within a few uses, and traditional soaps last forever, but they can also take forever to work into a foam. The RazoRock soap is a perfect marriage of both of the best qualities of cream and soap—the spreadability of cream, along with the last-a-while consistency of soap.

As you can see, it's pretty thick, and you only really need a small dab to get you going: 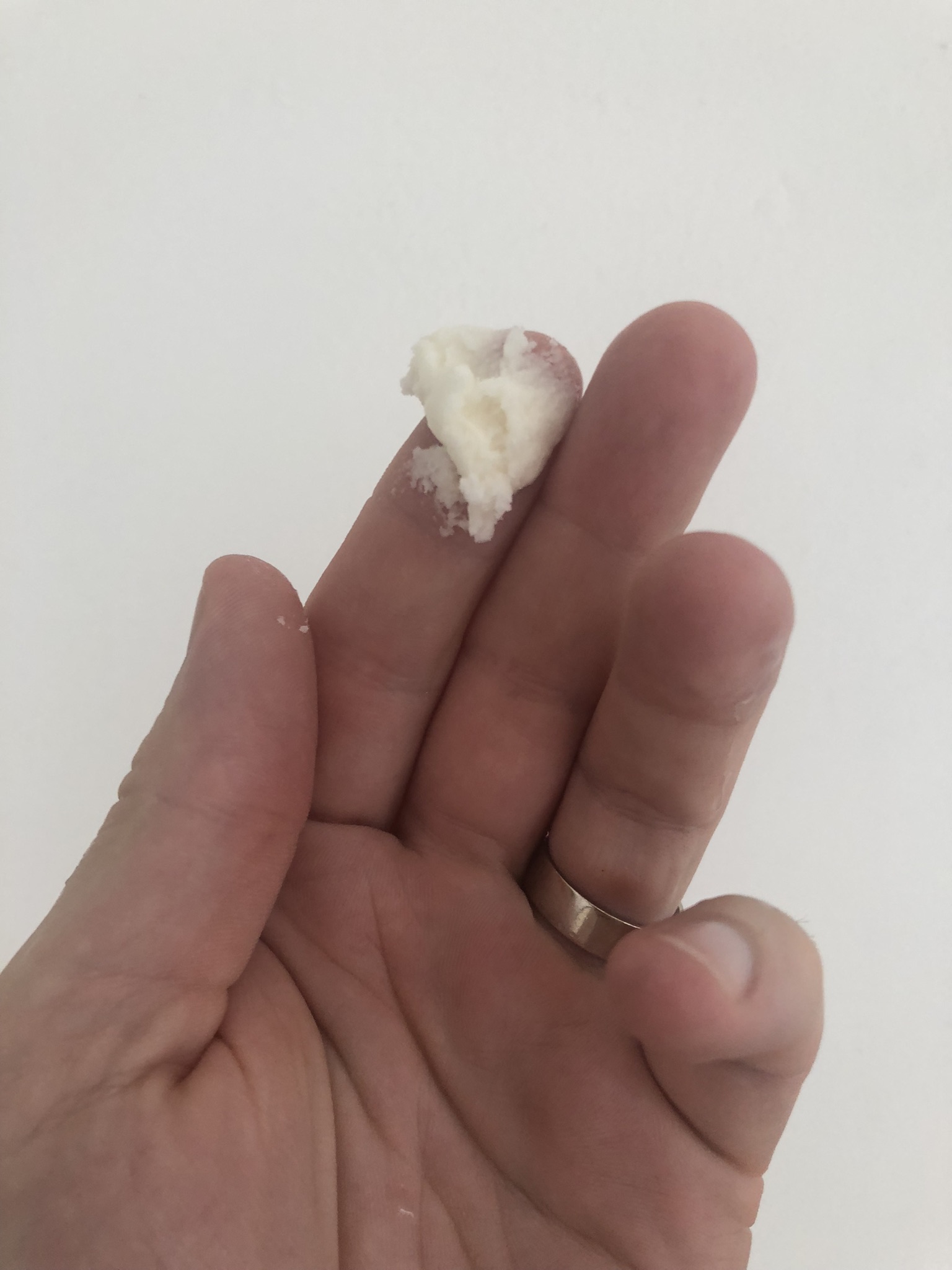 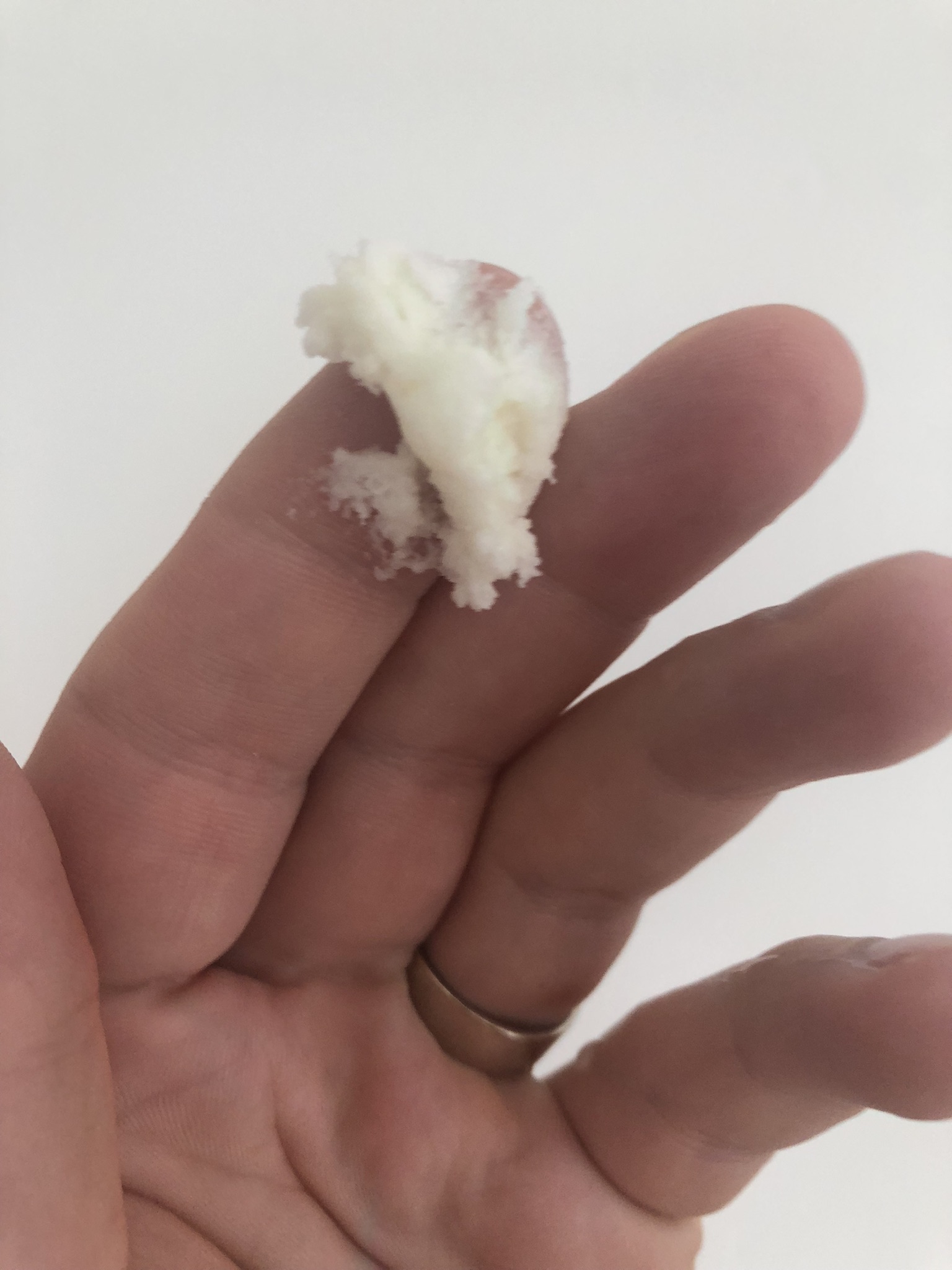 We ended up only using an amount the size of a peanut, and it jumped up into a really frothy pillow: 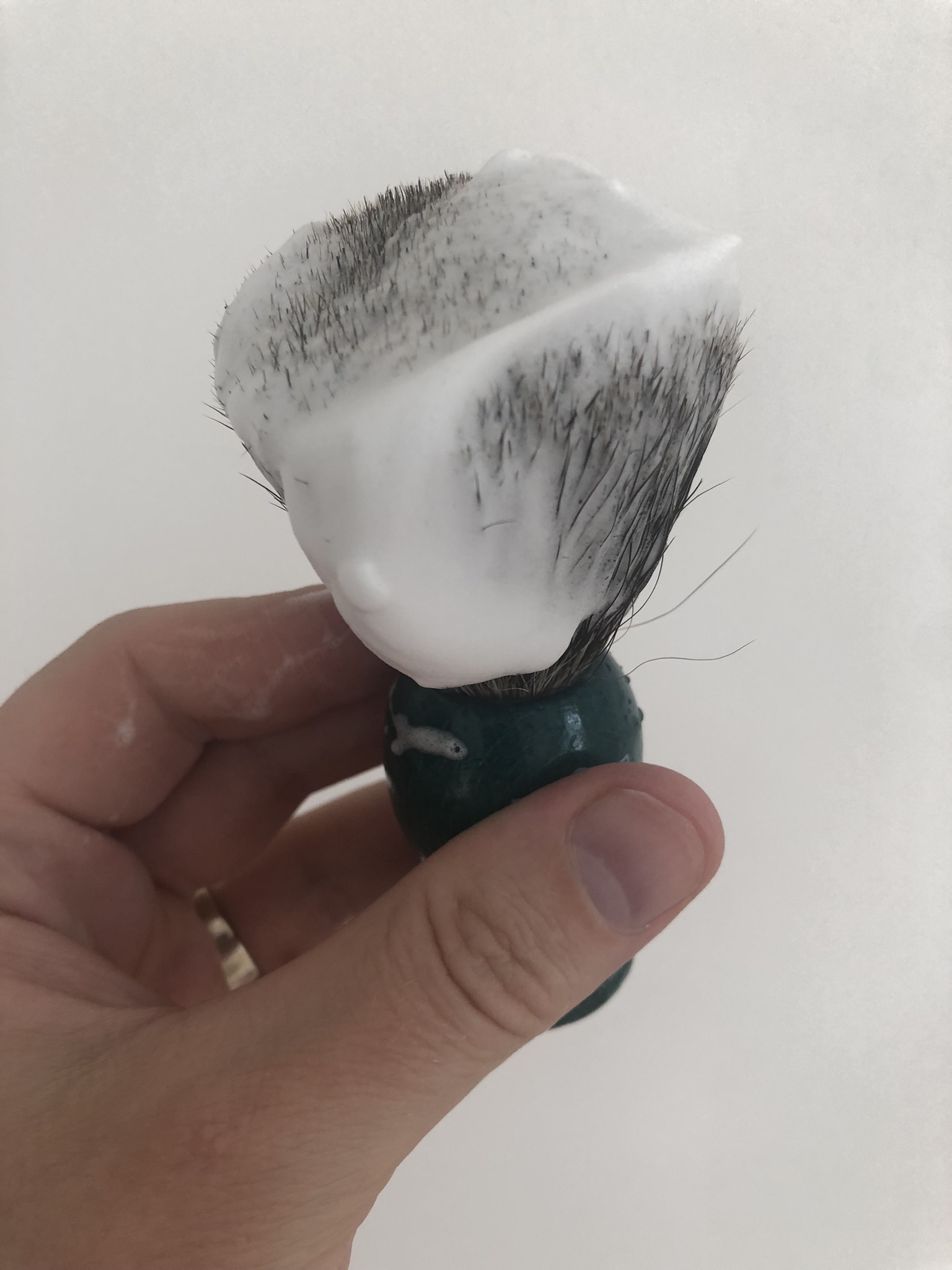 That's a handsome little cloud there, and it felt GREAT. The mixture is composed of tallow (which should be in way more shave products than it is), shea butter (which is always great), argan oil (which is pretty common), aloe vera (which is also under-used in men's shaving products), and lanolin (ditto). The result is a pleasantly-slick cream that feels really protective and nice, but washed off pretty easily after three passes. That's really all you can ask for.

So the cream/soap—fantastic. Now for something we maybe even love more:

The Alum is a Stand-Out Product

There aren't too many alum blocks out there, which is surprising, when you consider how many men have gotten into wet shaving over the last decade or two—and when you consider that it is an absolutely incredible product. The first time you use it—probably after getting a nasty nick and bleeding a bit—you're absolutely blown away by how powerful it is. It does an almost unbelievable job of sealing up shaving cuts.

The RazoRock alum block comes in a handsome, tuxedo-black package: 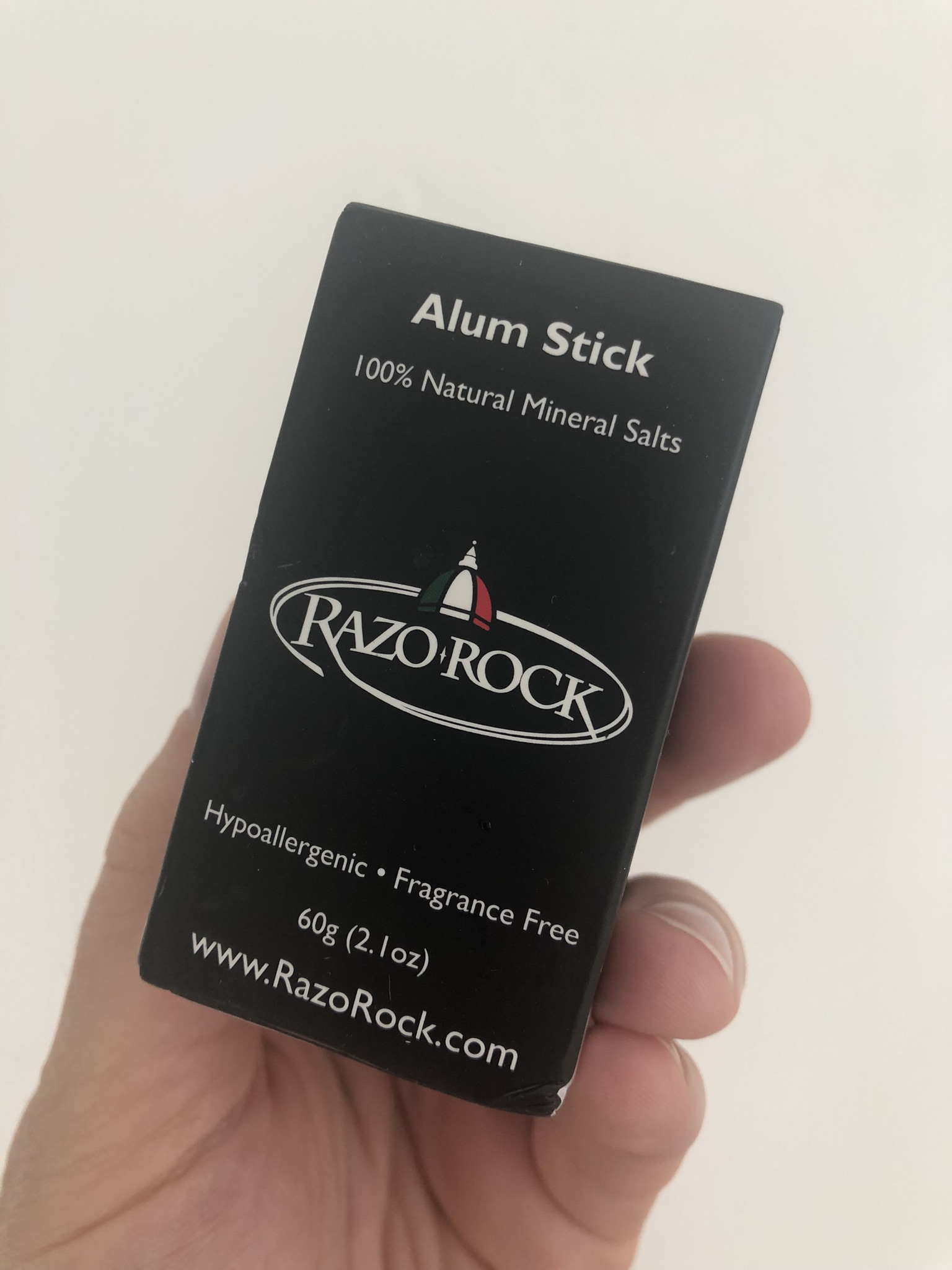 ...and the big deal here is that it's hypoallergenic and fragrance-free.

When you're putting something onto your skin at such a vulnerable moment—that is, after you've shaved and you've got open cuts!—you definitely don't want to use a product that may be harmful to you and cause an allergic reaction. So that hypoallergenic is fantastic, but so is the "fragrance-free" feature—for people with sensitive skin, fragrance is usually one of the biggest culprits when it comes to skin irritation, so it's a huge bonus that the RazoRock alum is fragrance-free.

Our favorite thing about their alum, however, is the shape and handle of the product itself. Take a look at it, and see if you can see what's special about it: 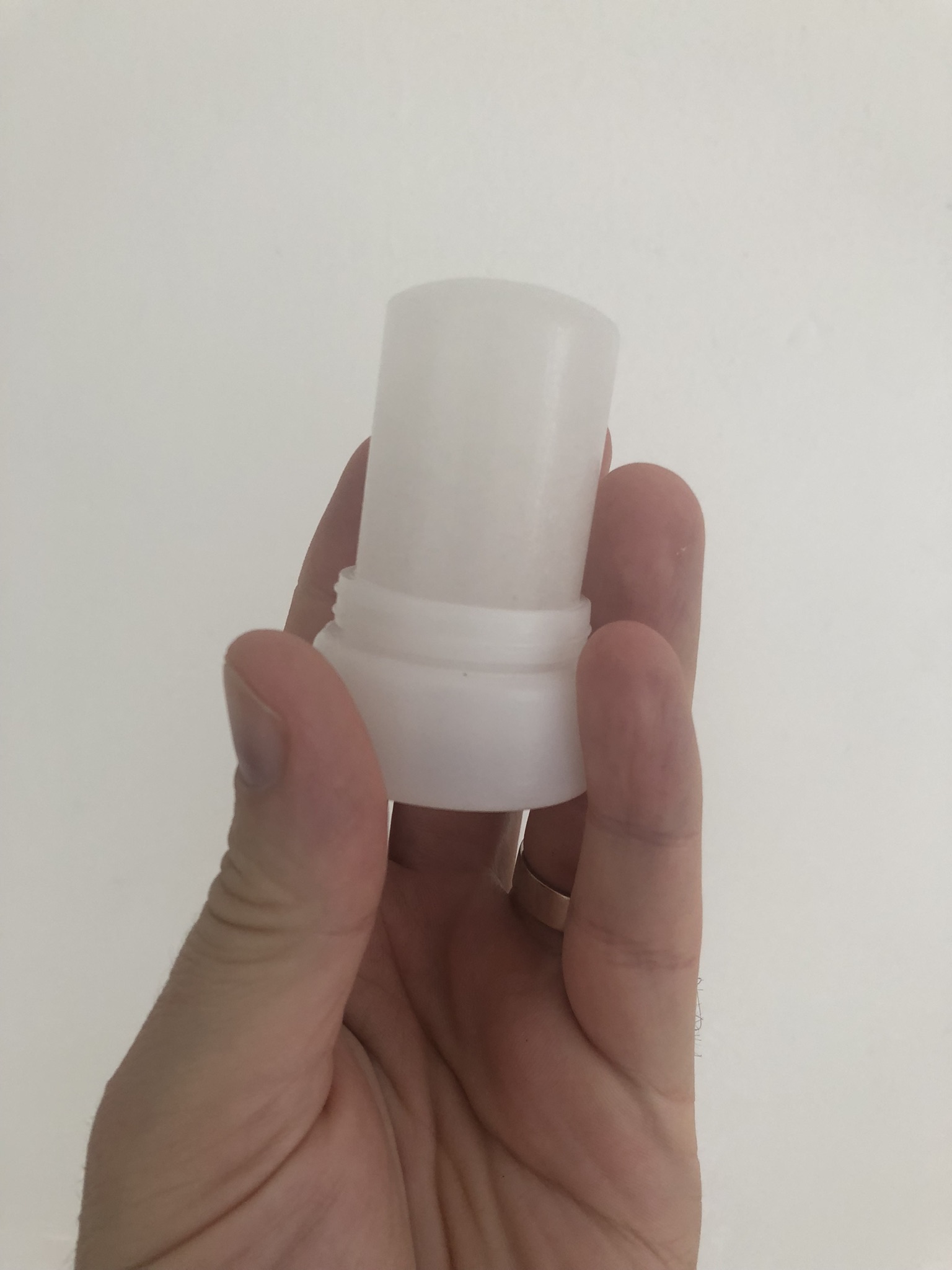 Can you see it? Take another look.

The absolutely wonderful thing about RazoRock Alum is that it's rounded at the top and has a non-alum, graspable handle at the bottom. Other alums don't have them—many are a rectangular block or rounded like a bar of soap, and they have NO handle.

So why is it so amazing that RazoRock alum is rounded at the top and has a handle? Because:

1) With the rounded top, you can gently apply it to your shaving cut, and it glides over your ENTIRE cut evenly and smoothly. Other alum blocks hurt simply because you need to go over your cut a dozen times because the alum is shaped properly and doesn't cover the cut in one pass; and

2) You can grasp the handle and securely hold the product, rather than grasping at a product that is inherently slippery. That's GREAT. If we had a dollar for every time we dropped an alum block, we'd be rich, but that's absolutely never a problem with this product, because it’s so easy to hold.

And, oh yeah—it works wonders. It's an incredible mix. We're not sure how they make alum block, but this works really, really well—and maybe we got a good stick or something, but it didn't hurt, either. A lot of alum blocks sting like a bee, but ours did not. We could feel it a *little* bit, but not much. Pretty incredible.

We haven't gotten around to using these yet, but the RazoRock razors are absolutely gorgeous—and they're really creative:

> The RazoRock Baby Smooth Double Edge Safety Razor in black looks like Darth Vader's helmet (and the blue one has the same color tone as a Bugatti—another great Italian company!);

> The RazoRock Game Changer .68-P Double-Edge Razor looks incredible, and the knurling on that looks amazing; and

> RazoRock Teck II Safety Razor is all shiny and chrome like the T-1000 (and you can't beat that price with a stick—at present, it's $9.99, which is kind of insane).

It looks like a few of these are back-ordered, too, which shows how much people want them.

These Guys Were Really Nice

This one shouldn't really matter too much, but it does—and as a website that reviews beard and shaving products, we get to talk with a lot of small business owners. Some are great, and some are awful. Some don't really give you the time of day. But our conversation with Michael was really pleasant, and he seemed like a great guy.

Does that make a difference when you're shaving? Not really, if we're being honest. Products are good or bad regardless of whether the owners are nice or not. But because they're great guys AND their products are great, does it make us want to continue giving them business? Absolutely.

These guys are going up against some really big names and they're doing a great job of it. The only complaint we'd have is that sometimes items in the online store are back-ordered—but what can you do, really? That's going around these days, and it just shows that people really like what they're doing. We're really happy to work with these guys, and we wish them all the best.

Questions? Comments? Jump over to our "Contact" page and let us know. Until then—be good, have fun, and happy shaving!

Shaving Soap vs. Cream: Which is Better?