Usually, we don't like bossy product names telling us what to do, but "Live Bearded" is an exception, because that’s a commandment we live by anyway, and we’re actually big fans of this company. They have some really unique offerings—which is difficult to do in the world of beard products—and here we'll look at their beard butter.

Do we love it? Do we hate it? Do we think the names of each butter are ridiculous or really clever? Read on to find out, and for those of you who just want to be on your way, we'll start with...

There aren't too many beard butters out there, and that’s a shame, because they can do a tremendous job of moisturizing your skin and beard hair. Live Bearded Beard Butter is a high-performing concoction, and it can imbue a great deal of hydration to your whiskers and the skin beneath it, and ease some of that skin irritation / itch / beardruff that comes with growing out a mane. It's made in some unique and creative scents, and you'll either like them or you won't. We wish the container were larger, because beard butter is the type of product you can run through pretty quickly (and if you really want a larger container, we'd recommend Maestro's Beard Butter [affiliate link] or Every Man Jack). Overall, a great option, in our humble opinion.

So, here’s what we like, followed by what we don’t:

It Does a Good Job Moisturizing and Softening

We'll start with this, because a lot of guys get confused when it comes to beard butters. The job of a good beard butter is to moisturize a beard, as well as the skin underneath it. That's it, really—a beard butter's job is to hydrate hair and skin, and they can do an incredible job when it comes to moisturizing. And that's wonderful, because a lot of guys have itchy skin, flakiness, and beardruff under their beards, and a good butter can alleviate a lot of those problems.

What a beard butter is not supposed to do is provide hold—that's what a beard balm (or even better, a beard wax) is supposed to do. Beard balms and beard waxes contain wax, and that's the ingredient that allows you to sculpt your beard. Beard butters don't have wax—they've got oils and butters aplenty, but no wax (most of the time, anyway—and Live Bearded doesn't). They can give your beard some body and make it look healthy and shiny, and they can tame some fly-aways and stray whiskers, but no hold.

SO, with that out the way, Live Bearded Beard Butter seems to do a great job moisturizing. It doesn’t seem greasy or overly-oily, but it imbues a lot of moisturization without that slick, wet feel. That's a rare feat, because very often a beard butter—which is, but design, chock full of oils and butters—has that sort of “slippery eel” feel.

We imagine it's able to perform well because... 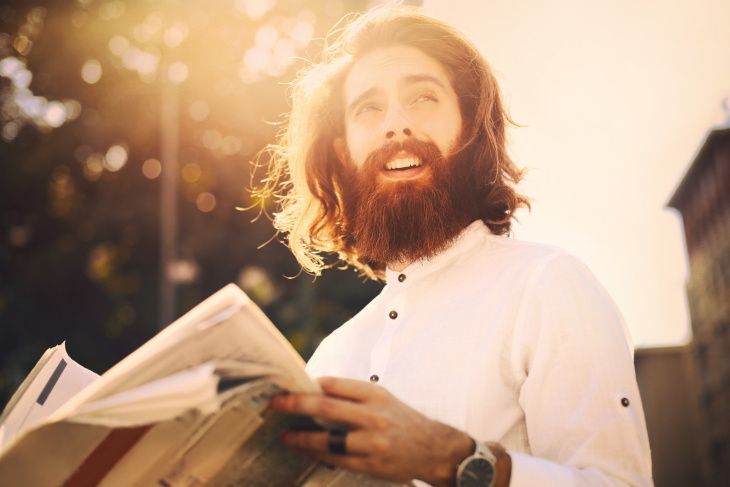 It's Got an All-Natural Ingredient List (With One Exception)

According to the bottle, here's what's inside the bottle:

That's a very nice lineup, especially when you consider that a lot of beard butters have some funky inclusions (and by funky inclusions, we mean "synthetic chemicals"). The only suspicious ingredient in that lineup is "fragrance/parfum." That's one of those blanket terms that makers of grooming products (for both men and women) use, and it's not exactly clear what that ingredient is. And, from what we can tell, in all of those great ingredients, all of which do a great job moisturizing, none of them are for scent—in other words, there's no sandalwood in the sandalwood variety, and instead they rely on "fragrance," there's no vanilla in the vanilla variety, and instead they rely on "fragrance," etc. That's a strike against this beard butter, unfortunately, and as much as we like this formulation, it would be great if the fragrance included was actually from the original scent itself (that is, sandalwood scent from actual sandalwood, for example). And who knows? Maybe it is—but we can be sure, because that word "fragrance" doesn't really tell us anything.

Here are some other notes and observations about the ingredient list, some worthwhile, some silly:

> We're always amused that beard companies list the Latin names for these ingredients—who is out there saying, "What's jojoba seed oil? Did you actually mean simmondsia chinesis?"

> In that vein, "Cocos nucifera" sounds like chant used to summon a demon; and finally

> "Tocopherol" sounds bad, but that's actually a great inclusion—it's actually just Vitamin E, which has a lot of great benefits for skin and hair.

When you run a website dedicated to beards, you end up using *hundreds* of different beard products, and you end up seeing the same scent profiles again and again. And we're not really complaining about that—it's a lot of fun running a beard website! We wouldn't have it any other way.

But you do get a little bored by the same-old scents over and over and over. And that's why it's really wonderful when you see the scent line-up represented in Live Bearded's beard butter line. They've included all the classic scents, but Live Bearded put a unique spin on each of them:

The Wingman: citrus, clove, and vanilla—an interesting combination of various sweet scents, but not cloyingly so;

The Gunslinger: sweet tobacco and cedar—that's a pretty intense name, but it's an interesting and surprisingly enticing mix;

The Executive: leather, cedar, and vanilla—what a great name!

The Legend: sandalwood and vanilla—a very nice pairing, and one we're surprised other companies haven't thought of, it's sweet but clean, somehow; and finally

Straight Up: their unscented beard butter. Another great name.

We're always amused by the names beard companies come up with. Bossman (a competitor of Live Bearded) has some funny names—they named their various scented beard jellies GOLD, MAGIC, STAGECOACH, ROYAL OUD, and our favorite, HAMMER, which is an oddly perplexing name, as hammers don't really have any scent (and we're politely teasing them—we actually like Bossman a lot, and most of their scents are really appealing). The names for Live Bearded are fantastic.

So, while the moisturization capability of Live Bearded is its #1 feature, we're big fans of the scents. They're not for everybody—and we discuss this further in a section below—but they're unique and well-devised.

We're Just Thrilled They Make a Beard Butter at All

This shouldn't really be praise—most of the time we can't praise a product just because it's a product—but given the dearth of beard butters out there, we're happy that Live Bearded decided to throw their hat in the ring. It seems like absolutely every company has a beard oil and absolutely every company has a beard balm, but very few also have a beard butter. And that's a shame, because as we've mentioned, beard butter offers a lot of unique benefits.

So—get it together, beard companies! Start making beard butters! There are a lot of guys out there with dry beards and dry skin—they need you!

Anyway. That said, while we do like Live Bearded a great deal, we do have a complaint or two, and our “Live Bearded Beard Butter Review” would be incomplete without them:

It Would Be Great If the Container Was Larger

Here's the only real downer about beard butters: they're light and fluffy, and that means 1) you end up using a lot of them on application, especially if you have a longer/denser beard, and 2) you go through the jars quicker than you would a beard oil or a beard balm. Beard butters offer unique benefits, but that's definitely one of the unique disadvantages—they can disappear quickly.

A lot of beard butters get around this problem by putting their butters in larger containers. Every Man Jack puts their beard butter in a 4-ounce tub (and we're big fans of their Every Man Jack Hemp Beard Butter (affiliate link)—hemp is an incredible moisturizer, and we wish more beard products used it) and Maestro's Beard Butter (affiliate link)—perhaps the classic beard butter is made in 4-ounce, 6-ounce, and even 8-ounce tubs. That's great, because we go through a LOT of it.

The Scents Won't Work for Everybody

We really have to admire the "corporate courage" it takes when a company that makes beard products goes out a limb and makes a new fragrance for their products, because it's almost a sure thing that a lot of people just won't like it. Most people seem to like the classic, well-known, single-scent formulations, like lemon/lime, vanilla, and sandalwood—and that's why you see soooooooooooo many companies that make beard balms and oils and butters in those scents. They're predictable and safe, and they're easy.

So we always appreciate when a company decides to risk losing a few people and making something unique. That's definitely the case here—the scents Live Bearded came up with a unique and original and a love of guys love them (we like most of them, and *really* love two of them), but a lot of guys just won't.

But that's the name of the game, right? Stand out, be unique, and not everybody will be into. So we appreciate Live Bearded's decision to make new scents, even if we're certain that not everyone will.

Closing Out: Live Bearded vs. Grave Before Shave?

There you have it—our opinion on Live Bearded's Beard Butter. Overall, a great option if you've looking for hydration for your skin and beard, and a little bit of body. We like the scents, and we like the creativity we brought to their creation—most beard companies go with the classic scents, and that's it. The other company we like that has a great scent is Grave Before Shave, and it's funny, because those two names—Live Bearded and Grave Before Shave—are basically two different ways of saying the same thing: beards for life!

Anyway. That's it for now—have fun, be good, and happy beard!

DIY Beard Butter Recipes: Three of Our Favorites, and How to Make Your “Signature Scent”